Indian politician (born 1953)
In this Indian name, the name Muthuvel Karunanidhi is a patronymic, and the person should be referred to by the given name, Stalin.

M.K. Stalin was placed 30th on the list of India's Most powerful Personalities in 2019 by the Indian Express.[3]

Stalin is the third son of 2nd Chief Minister of Tamil Nadu and DMK Chief M. Karunanidhi, and was born to his wife, Dayalu Ammal. Stalin was born in Madras, now Chennai, on 1 March 1953. Karunanidhi was addressing a condolence meeting for Soviet leader Joseph Stalin, who died only four days after his child was born, and thus decided to name his son after Stalin.[4][5]

Stalin studied at the Madras Christian College Higher Secondary School.[6] He completed a pre-university course at Vivekananda College, and obtained a history degree from Presidency College, Chennai of University of Madras in 1973. M. K. Stalin was conferred Honorary Doctorates by Anna University on August 1, 2009.[7][8][9][10]

Stalin married Durga (alias Shantha) on August 20 , 1975 and has two children. His son is Udhayanidhi Stalin, an actor and politician.

Like his father, Stalin has also publicly disclosed that he is an atheist. But he also said that he is not against any religious beliefs.[11][12][13]

His political career began in his early teens when he started the DMK Gopalapuram Youth Wing in a tea shop with several friends.[14] As a 14 year old, he campaigned for his uncle, Murasoli Maran, in the 1967 elections.[15][16] In 1973, Stalin was elected to the General committee of the DMK.[17]

He came to limelight when he was jailed in Central Prison, Madras under the Maintenance of Internal Security Act (MISA) for protesting against the Emergency in 1976.[18][19][20] He was beaten up in custody and a fellow DMK prisoner C. Chittibabu died of injuries and police torture while protecting him.[21][22][23] He wrote his final year BA exams while in prison.[5] Stalin formed the DMK youth wing. In 1982 Stalin became the youth wing secretary of DMK, a post he held for more than four decades.[24]

In 2011 Stalin changed his constituency for the first time in his political career, moving from Thousand Lights to Kolathur constituency on the outskirts of Chennai city.[5]

Stalin became the city's first directly elected mayor in 1996.[26] He privatised conservancy operations in the city and constructed nine flyovers and coined a pet project called Singara Chennai (Beautiful Chennai), lauded for improving Chennai's infrastructure.[5] Popularly known as Managara Thanthai (father of the city). Stalin was reelected mayor in 2001.[27] However, Chief Minister J. Jayalalithaa enacted the Tamil Nadu Municipal Laws (Amendment) Act, in 2002, which prevents a person from holding two elected posts in the government. This law was applied retroactively to Stalin's case (he was elected Thousand Lights MLA) in a move widely seen as aimed at removing him as Chennai's mayor.[28] However, the Madras High Court struck down the law stating that legislative bodies were not "prevented" from making laws affecting the "substantive rights" of persons retrospectively. However, the court held that under Madras (now Chennai) City Municipal Corporation Act, 1919, a person cannot be mayor for two consecutive terms, though unlike Stalin, earlier mayors were not directly elected. Stalin did not appeal in the Supreme Court.[29] In 2003, Stalin became Deputy General Secretary of the DMK.[14]

In the 2006 Assembly Elections, the DMK regained control of the state assembly, partly due to Stalin's efforts. Stalin became the Minister for Rural Development and Local Administration in the Government of Tamil Nadu and retained this office throughout his term. During his tenure, he developed his skills as an administrator, helping to strengthen self-help groups in the state.[16] In 2008, he became treasurer of DMK.[14]

On 29 May 2009, Stalin was nominated as Deputy Chief Minister of Tamil Nadu by Governor Surjit Singh Barnala.[30]

On 3 January 2013, Karunanidhi named Stalin as his heir apparent, thus ending a long time confusion about who would take over the party reins after Karunanidhi's death.[31] 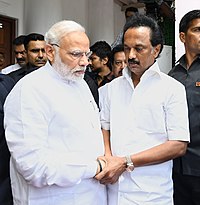 In the 2021 Assembly elections, Stalin led the campaign for the Secular Progressive Alliance. They won 159 seats out 234, with the DMK itself winning an absolute majority with 132 seats. Stalin took his oath as chief minister on 7 May 2021 along with the rest of his cabinet.[38][39]