Dutch association football player
In this Dutch name, the surname is De Jong, not Jong.

De Jong was born in Aigle, Switzerland,[5] a son of two Dutch volleyball players who played professionally in that country.

He started his football career in Doetinchem at the amateur club DZC '68, together with his brother. They were both then recruited by the local professional club De Graafschap.

De Jong made his Eredivisie debut in a match versus NAC Breda, coming on as a substitute. After another match coming off the bench against SC Heerenveen de Jong became a starter. In their first match together against Willem II de Jong gave an assist to Ben Sahar giving De Graafschap a 9–0 win. He scored his first Eredivisie goal in a home match against Twente. Moments later de Jong made a handball giving Twente a penalty which Blaise N'Kufo scored; the match ended 2–2. His second goal came in a home match versus Heracles Almelo. Resit Schuurman took a free kick and Rogier Meijer headed it on. De Jong was standing with his back to goal and scored with an overhead kick which gave De Graafschap a 1–0 victory. In a home game versus NEC Nijmegen he injured his ankle and he was substituted in the first half. De Jong came back from injury in the play-offs for promotion/relegation. 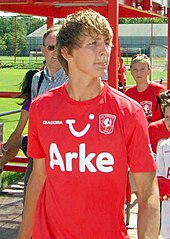 On 6 April 2009, it was confirmed that de Jong signed a contract for three years with an option for another year with Twente. His contract would start on 1 July 2009. He played his first minutes for Twente in the cup match against SC Joure where he came on as a second-half substitute replacing Dario Vujičević. He provided two assists in the 8–0 victory over SC Joure. He scored his first two goals for Twente in the cup match against Capelle.[citation needed]

De Jong made his Europa League debut against FC Sheriff Tiraspol replacing Miroslav Stoch. He also played against Fenerbahçe S.K. when he came on as a substitute. He scored two goals in the cup match against Helmond Sport, Twente would go on and win the match 3–0. In the away game against FC Utrecht de Jong made his debut in the Eredivisie when he replaced Kenneth Perez in the 90th minute.[citation needed]

Because Blaise N'Kufo was injured, de Jong deserved a starting spot against Werder Bremen in the knockout stage (32 teams) of the Europa League. He scored his first goal in the Europa League for Twente in the away game against Werder Bremen. Twente were already 3–0 behind when de Jong headed the 3–1 past goalkeeper Christian Vander.[citation needed]

He was very important in the 2010 Johan Cruyff Shield scoring the winning goal against Ajax in the eighth minute. He started the match because Marc Janko was injured. De Jong intercepted a pass from Maarten Stekelenburg to Gregory van der Wiel and then stayed calm and scored the winner in the match which ended 1–0.[citation needed] 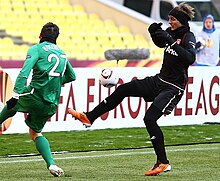 De Jong played in the Champions League play-off game against Benfica, a 2–2 home draw on 16 August.[6] Four days later he scored his first Eredivisie goal of the campaign in a 5–1 demolition of SC Heerenveen.[7] The following week, on de Jong's 21st birthday, he found the back of the net two more times as Twente smashed VVV Venlo 4–1.[8]

De Jong scored two goals against RKC Waalwijk on 21 January 2012, one was a tap in to an open goal and the other a penalty, as Twente ran out 5–0 winners.[9] In Twente's following fixture against FC Groningen on 29 January, de Jong netted a hat-trick, each goal coming off an assist from Ola John,[10] and provided an assist for Leroy Fer as his side won 4–1 and climbed to second in the Eredivisie table.[11] On 10 February, de Jong found the back of the net two more times but Twente missed the chance to go top of the league table, as they lost 3–2 to SC Heracles.[12] De Jong's two goals meant he had scored seven times in the past three Eredivisie fixtures.[citation needed]

On 4 March, de Jong scored a goal in Twente's 6–2 thrashing of fellow title contenders PSV at the Philips Stadion.[13] Four days later in a Europa League match against Schalke 04, de Jong was the protagonist of a controversial penalty decision[14] that resulted in a red card for Schalke defender Joël Matip, and a penalty kick which he himself successfully converted, to ensure the win for his side by 1–0.[15] However Twente ended up falling out of the competition, losing 4–1 in the second leg in Germany, as de Jong's fellow Dutchman Klaas-Jan Huntelaar netted a hat-trick.[16]

De Jong scored twice in two minutes on 14 April to put his side 2–1 up away to NAC Breda, but an injury-time strike from Nourdin Boukhari denied Twente the chance to close the gap on title rivals Ajax.[17] He finished the season with 25 goals on a joint-second place, seven behind top-scorer Bas Dost. At the end of the 2011–12 season, De Jong announced he wanted to leave the club.[18] Having attracted the interest of several clubs around Europe, including Premier League side Newcastle United, de Jong accused the club's chairman [Joop Munsterman] of increasing the asking price for him.[19] In response, the club's chairman and Steve McClaren expressed dismay over de Jong's comments.[20]

On 18 July 2012, de Jong signed for Bundesliga side Borussia Mönchengladbach on a five-year deal, with a fee of €15 million (£12.6m), having stated it was his dream to join.[21][22] Eight months later after the move, de Jong stated the Bundesliga was "a great place to develop as a player".[23]

He made his debut with Mönchengladbach in a match against Munich 1860, His team ended up winning 4–2, however, de Jong was quite anonymous during his first match, failing to score or assist any goals.[21] On 21 August, he started his first European game for Borussia Mönchengladbach and in the process scored an own goal from a free kick in a 3–1 defeat at the hands of Dynamo Kyiv during the UEFA Champions League Qualifiers.[24] His first goal for the club came in a 3–2 defeat to 1. FC Nürnberg on 15 September, converting a tap in after a cross from Patrick Herrmann.[25] However, later in the season, De Jong's first team opportunities soon faded after falling out with manager Lucien Favre and only made twenty-three appearances; scoring six times. Towards the end of the season, De Jong reiterated he was confident he could prove himself as the best striker.[26]

However, in the 2013–14 season, De Jong's first team place remained limited, as his playing minutes significantly decreased and made fourteen appearance in the first half of the season.[citation needed]

On 29 January 2014, de Jong completed a loan signing with Premier League side Newcastle United until the end of the 2013–14 season.[27] He made his debut on 1 February in the Tyne-Wear derby against Sunderland. In May 2014, it was announced that de Jong would be returning to Borussia Mönchengladbach after he failed to score in any of his twelve appearances for Newcastle.[28]

De Jong made his official debut for the club, where he scored in both legs, as PSV beat St. Pölten 4–2 on aggregate in the third round of Europa League.[31][32] It took until 31 August 2014 for De Jong to score his first league goal for the club, in a 2–0 win over Vitesse Arnhem.[33]

De Jong received his first call-up for the Netherlands senior team for the friendly against Austria on 9 February 2011 and made his debut in the same match, replacing Dirk Kuyt. He scored his first goal with the national squad on 6 September 2011 in the 2–0 win during the UEFA Euro 2012 qualifying game against Finland that secured Dutch qualification to the finals.[40] On 7 May 2012, he was named in the provisional list of 36 players for UEFA Euro 2012 by Netherlands manager Bert van Marwijk. He was one of the 23 players chosen to represent the team in the tournament, but he did not make any appearances.[citation needed]