Sir Ludwig Guttmann CBE FRS[1] (3 July 1899 – 18 March 1980) was a German-British[2] neurologist who established the Stoke Mandeville Games, the sporting event for people with disabilities (PWD) that evolved in England into the Paralympic Games. A Jewish doctor who fled Nazi Germany just before the start of the Second World War, Guttmann was a founding father of organized physical activities for people with disabilities.[3][4][5][6]

Ludwig Guttmann was born on 3 July 1899 to a German Jewish family in Tost in Upper Silesia in the former German Empire (currently Toszek, Poland), the son of Dorothy (Weissenberg) and Bernard Guttmann, a distiller.[7][8][9] His family moved when he was three years old to the Silesian city of Königshütte (today Chorzów, Poland) where he passed his Abitur at the humanistic grammar school in 1917 before he was called up for military service.

Guttmann encountered his first paraplegic patient, a coal miner with a spine fracture, while volunteering at an accident hospital in Königshütte. The patient later died of sepsis.[7] Guttmann started his medical studies in April 1918 at the University of Breslau. He transferred to the University of Freiburg in 1919 and received his Doctorate of Medicine in 1924.

By 1933, Guttmann was working in Breslau (now Wrocław, Poland) as a neurosurgeon and lecturing at the university.[10] Guttmann learned from the pioneer of neurosurgery Otfrid Foerster at his research institute. Despite having worked successfully as first assistant to Foerster, Guttmann was expelled from his university appointment and his job in 1933 under the Nuremberg Laws and his title changed to "Krankenbehandler" (one who treats the sick).[11] With the arrival of the Nazis in power, Jews were banned from practising medicine professionally, and he was assigned to work at the Breslau Jewish Hospital, where he became medical director in 1937.[10] Following the violent attacks on Jewish people and properties during Kristallnacht on 9 November 1938, Guttmann ordered his staff to admit any patients without question. The following day, he justified his decision on a case-by-case basis with the Gestapo. Out of 64 admissions, 60 patients were saved from arrest and deportation to concentration camps.[12]

In early 1939, Guttmann and his family left Germany because of the Nazi persecution of the Jews. An opportunity for escape had come when the Nazis provided him with a visa and ordered him to travel to Portugal to treat a friend of the Portuguese dictator António de Oliveira Salazar.[13]

Guttmann was scheduled to return to Germany via London, when the Council for Assisting Refugee Academics (CARA) arranged for him to remain in the United Kingdom. He arrived with his wife Else Samuel Guttmann and two children, a son, Dennis, and a daughter, Eva age 6 in Oxford, England, on 14 March 1939.[7] CARA negotiated with the British Home Office on their behalf, and gave Guttmann and his family £250 (equivalent to £16,000 in 2019) to help settle in Oxford. Guttmann continued his spinal injury research at the Nuffield Department of Neurosurgery in the Radcliffe Infirmary. For the first few weeks after arrival the family resided in the Master's Lodge of Balliol College (with the Master Sandie Lindsay) until they moved into a small semi-detached house in Lonsdale Road.[14] Both children were offered free places by the headmistress of Greycotes School. The family were members of the Oxford Jewish community, and Eva remembers becoming friendly with Miriam Margolyes, now a famous actress.[15] The Jewish community in Oxford was growing rapidly as a result of the influx of displaced academic Jews from Europe.

With the outbreak of the Second World War, Guttmann and his family stayed in the home of Lord Lindsay, CARA Councillor and Master of Balliol College.[16]

In September 1943, the British government asked Guttmann to establish the National Spinal Injuries Centre at Stoke Mandeville Hospital in Buckinghamshire.[7] The initiative came from the Royal Air Force to make sure the treatment and rehabilitation of pilots with spine injuries, "who often crashed on approach with their bombers damaged".[17] When the centre opened on 1 February 1944, the United Kingdom's first specialist unit for treating spinal injuries, Guttmann was appointed its director (a position he held until 1966). He believed that sport was an important method of therapy for the rehabilitation of injured military personnel, helping them build up physical strength and self-respect.[18]

Guttmann became a naturalised British citizen in 1945.[19] He organised the first Stoke Mandeville Games for disabled war veterans, which was held at the hospital on 29 July 1948, the same day as the opening of the London Olympics. All participants had spinal cord injuries and competed in wheelchairs.[18] In an effort to encourage his patients to take part in national events, Guttmann used the term Paraplegic Games. These came to be known as the "Paralympic Games", which later became the "Parallel Games" and grew to include other disabilities.

By 1952, more than 130 international competitors had entered the Stoke Mandeville Games. As the annual event continued to grow, the ethos and efforts by all those involved started to impress the organisers of the Olympic Games and members of the international community. At the 1956 Stoke Mandeville Games, Guttmann was awarded the Sir Thomas Fearnley Cup by the International Olympic Committee (IOC) for his meritorious achievement in service to the Olympic movement through the social and human value derived from wheelchair sports.

In 1961, Guttmann founded the British Sports Association for the Disabled, which would later become known as the English Federation of Disability Sport.

In 1961, Guttmann founded the International Medical Society of Paraplegia, now the International Spinal Cord Society (ISCoS); he was the inaugural president of the society, a position that he held until 1970.[21] He became the first editor of the journal, Paraplegia (now named Spinal Cord).[22] He retired from clinical work in 1966 but continued his involvement with sport.[22] 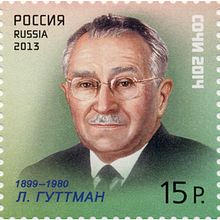 Guttmann on a 2013 Russian stamp from the series "Sports Legends"

Stoke Mandeville Stadium, the National Centre for Disability Sport in the United Kingdom, was developed by him alongside the hospital.[24]

A specialist neurorehabilitation hospital in Barcelona, the Institut Guttmann [es], is named in his honour.[25] The founder of this, the first rehabilitation clinic for paraplegics in Spain, was Guillermo González Gilbey, who himself suffered from paraplegia and made great progress in England with Ludwig Guttmann.

In June 2012, a life-sized cast-bronze statue of Guttmann was unveiled at Stoke Mandeville Stadium as part of the run-up to the London 2012 Summer Paralympics and Olympic Games. After the Games, it was moved to its permanent home at the National Spinal Injuries Centre.[26] Guttmann's daughter, Eva Loeffler, was appointed the mayor of the London 2012 Paralympic Games athletes' village.[27]

In August 2012, the BBC broadcast The Best of Men, a TV film about Guttmann's work at Stoke Mandeville during and after the Second World War. The film, written by Lucy Gannon, starred Eddie Marsan as Dr. Guttmann and Rob Brydon as one of the seriously injured patients, who were given a purpose in life by the doctor.

The Sir Ludwig Guttmann Centre is an NHS facility providing GP, Orthopaedic and Sports and Exercise Medicine outpatient services as well as imaging on the site of the 2012 Olympic village.

The Ludwig Guttmann Prize of the German Medical Society for Paraplegia is awarded for "excellent scientific work in the field of clinical research on spinal cord injury".[28]

In 2019 the National Paralympic Heritage Centre, a small accessible museum, was opened at Stoke Mandeville Stadium celebrating the birthplace of the Paralympics, sharing the collections of the early Paralympic Movement and the central role played by Professor Sir Ludwig Guttmann.

As "Neurological Surgeon in charge of the Spinal Injuries Centre at the Ministry of Pensions Hospital, Stoke Mandeville", he was appointed Officer of the Order of the British Empire (OBE) in the 1950 King's Birthday Honours.[31] On 28 June 1957, he was made an Associate Officer of the Venerable Order of Saint John.[32]

On 24 October 2013, a commemorative plaque was unveiled by the Association of Jewish Refugees (AJR) at the National Spinal Injuries Centre to honour Guttmann's life and work. As an active member of the AJR, he had served on the board for over 25 years.[10]