Katy Perry performing during the Super Bowl XLIX halftime show at the University of Phoenix Stadium in February 2015. It is the most watched halftime show on network broadcast, with a TV audience of 118.5 million.[1]

Halftime shows are a tradition during American football games at all levels of competition. Entertainment during the Super Bowl, the annual championship game of the National Football League (NFL), represents a fundamental link to pop culture, which helps broaden the television audience and nationwide interest. 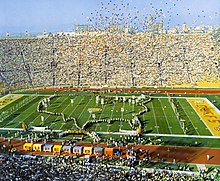 View of the halftime show at Super Bowl I

During most of the Super Bowl's first decade, the halftime show featured a college marching band. The show's second decade featured a more varied show, often featuring drill teams and other performance ensembles; the group Up with People produced and starred in four of the performances. The middle of the third decade, in an effort to counter other networks' efforts to counterprogram the game,[3] saw the introduction of popular music acts such as New Kids on the Block, Gloria Estefan, Michael Jackson, Clint Black, Patti LaBelle, and Tony Bennett. Starting with Super Bowl XXXII, commercial sponsors presented the halftime show; within five years, the tradition of having a theme—begun with Super Bowl III—ended, replaced by major music productions by arena rock bands and other high-profile acts. In the six years immediately following an incident at Super Bowl XXXVIII where Justin Timberlake exposed one of Janet Jackson's breasts in an alleged "wardrobe malfunction", all of the halftime shows consisted of a performance by one artist or group, with the musicians in that era primarily being rock artists from the 1960s, 1970s and 1980s. These shows were considered "family friendly" and the time in which they took place has been described as "the age of reactionary halftime shows".[4] Since Super Bowl XLV, the halftime show has returned to featuring popular contemporary musicians, with the typical format featuring a single headline artist collaborating with a small number of guest acts.

The NFL does not pay the halftime show performers an appearance fee, though it covers all expenses for the performers and their entourage of band members management, technical crew, security personnel, family, and friends.[5] Super Bowl XXVII halftime show with Michael Jackson provided an exception, as the NFL and Frito-Lay agreed to make a donation and provide commercial time for Jackson's Heal the World Foundation.[6][7][8] According to Nielsen SoundScan data, the halftime performers regularly experience significant spikes in weekly album sales and paid digital downloads due to the exposure.[9] For Super Bowl XLIX, it was reported by the Wall Street Journal that league officials asked representatives of potential acts if they would be willing to provide financial compensation to the NFL in exchange for their appearance, in the form of either an up-front fee, or a cut of revenue from concert performances made after the Super Bowl. While these reports were denied by an NFL spokeswoman, the request had, according to the Journal, received a "chilly" response from those involved.[10][11]

U2 performed 3 songs: "Beautiful Day", "MLK", and "Where the Streets Have No Name". During the beginning of "MLK" and continuing until the end of "Where the Streets Have No Name", a large banner behind the band displayed the names of all the people who lost their lives on the September 11 attacks. Bono ended the song by opening up his jacket, the inside of which displayed the American flag.

For The Rolling Stones, the stage was in the form of the group's iconic tongue logo (John Pasche's "Cunning Linguist" first used in 1971 on their Sticky Fingers album). It was the largest stage ever assembled for a Super Bowl halftime show, with 28 separate pieces assembled in five minutes by a 600-member volunteer stage crew. The group performed three songs: "Start Me Up", "Rough Justice", and "(I Can't Get No) Satisfaction". The show was viewed by 89.9 million people, more than the audiences for the Oscars, Grammys and Emmy Awards combined.[62] In the wake of the Super Bowl XXXVIII halftime show controversy with Janet Jackson and Justin Timberlake, ABC and the NFL imposed a five-second delay and censored lyrics considered too sexually explicit in the first two songs by briefly turning off Mick Jagger's microphone—censoring to which the group had previously agreed.[63] However, the choice of The Rolling Stones sparked controversy in the Detroit community because the band did not represent the traditional Detroit "Motown Sound", and no artists from the area were included.[64]