This is a list of kings and queens of the Kingdom and Crown of Castile. For their predecessors, see List of Castilian counts. 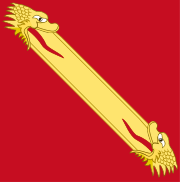 The Royal Bend of Castile, adopted since Alfonso XI in 1332 as a personal standard of the monarchs
Further information: Anscarids

The following dynasts are descendants, in the male line, of Urraca's first husband, Raymond of Burgundy.

Following the death of Peter, a succession crisis arose between Peter's illegitimate half-brother Henry of Trastámara and the Englishman John of Gaunt, a great great grandson of Ferdinand III of Castile, who claimed the title of King of Castile and Léon by virtue of his marriage to Constance, daughter of Peter. Henry took the throne by force, and faced several military actions by John of Gaunt, who had forged an alliance with John I of Portugal in an attempt to enforce his claim, however John of Gaunt was unsuccessful in his campaigns, and Henry established the House of Trastámara as the new ruling dynasty of Castile. 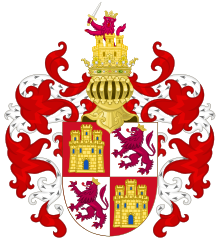 Royal arms of the Crown of Castile by the time of John II
Further information: House of Trastámara

Henry II was the illegitimate son of Alfonso XI. He was made count of Trastámara. 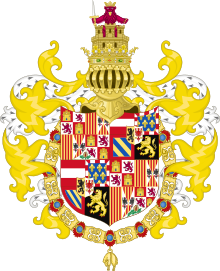 Coat of Arms of Philip I

Coat of Arms of Philip V

The Crown of Castile existed in its own right within the Spanish crown and with its own law until the arrival of the Bourbon dynasty after the War of Spanish Succession.

Presented content of the Wikipedia article was extracted in 2021-06-13 based on https://en.wikipedia.org/?curid=69613