Lauren Ridloff (née Teruel; born April 6, 1978) is a deaf American actress known for her roles in the 2010–present TV series The Walking Dead and the 2021 Marvel Cinematic Universe film Eternals. Her breakthrough role was in 2018 with her lead performance in the Broadway play Children of a Lesser God, for which she was nominated several awards, including a Tony Award for Best Actress in a Play. She was subsequently cast in The Walking Dead as Connie in its ninth season that aired in late 2018. In Eternals, she played the deaf superhero Makkari.

Lauren Ridloff was born in Chicago, Illinois in the United States. She was born deaf to hearing parents, a Mexican-American father and an African-American mother.[1] Her father Hugo was a counselor at University of Illinois at Chicago.[2] He was also a musician, and Ridloff's mother was an artist. Ridloff grew up in the Chicago community area of Hyde Park.[3] Her parents thought their infant had a developmental delay, but by the time she was two years old, they learned that she was deaf. They learned sign language with her and enrolled her in Catholic school with hearing children. She performed well in school. When she was 13 years old, she stopped using her voice so people would stop judging her intelligence based on her vocal intelligibility. Following Catholic school, she attended the Model Secondary School for the Deaf in Washington, DC, where she was among deaf and hard-of-hearing peers. She began exploring the arts, starting with ceramics and becoming involved with drama. In a school production of The Wiz, she played Dorothy. She was also on the cheerleading team and became one of the first deaf American cheerleaders to compete internationally.[1]

Ridloff chose to attend California State University, Northridge, a university with a large deaf and hard-of-hearing student population, because of its National Center on Deafness.[2] She majored in English with an emphasis in creative writing.[4] While in college, she joined a local deaf performing group and took up hip-hop dancing.[2] After she graduated in May 2000, she began working at the NCOD, where she was involved in a program to improve post-secondary school education for deaf and hard-of-hearing students. Later in the year, she decided to compete in the National Association of the Deaf's Miss Deaf America competition, having been inspired by the competition she saw two years prior. She won the preliminary competition of Miss Deaf Illinois and ultimately won Miss Deaf America.[5] She was the second consecutive CSUN graduate to win the crown, and she was also the first competitor of either African-American or Mexican-American descent to win the pageant.[2] Her activities in competition included an ASL performance of the book The Giving Tree by Shel Silverstein.[1] After winning Miss Deaf America, she began a two-year stint of attending luncheons and graduation ceremonies as a spokesperson for NAD.[2]

After graduating from CSUN, Ridloff went to Hunter College in New York to study education with the goal of becoming a children's author.[1] After earning her Masters Degree in Education in 2005,[6] she started teaching kindergarten and first grade at Public School 347 in Manhattan. She was also involved with deaf community theater and film work for friends. She married Douglas Ridloff in 2006, and they have two children,[1] both boys and both deaf.[3] She left her teaching job to take care of the boys. The family lives in Williamsburg, Brooklyn, a neighborhood of New York.[1]

Ridloff played a small role as a super powered agent in the 2017 film Sign Gene: The First Deaf Superheroes written, directed and starred by Emilio Insolera[7][8]. She also joined the production of the 2017 film Wonderstruck as a consultant and was ultimately cast in a small role.[3] She also appeared in the lyric video for the song "Love Me Now" by John Legend.[9] 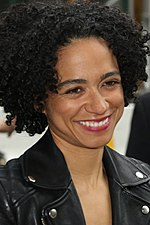 When director Kenny Leon began producing a revival of the 1980 play Children of a Lesser God, he hired Ridloff to tutor him in American Sign Language. Leon cast Joshua Jackson as the male lead but had not cast the female lead role. By then, Ridloff had been tutoring Leon for over a year. He asked her to substitute at a read-through early on, and based on her performance, he offered her the role. The cast had an initial run at the Berkshire Theatre Group in Stockbridge, Massachusetts. One of the most challenging aspects of her role was using her voice, which she had not used since she was 13 years old. The New York Times wrote, "Ms. Ridloff compares the experience of using her voice during the play to a crotch shot, saying that at first she felt exposed, and vulnerable, and ugly." After a year with the role and with a vocal coach, she found greater ease. She explained, "It feels empowering to me—like finally I own every part of myself, [but] I don’t see myself ever using my voice on a conversational level—that's just not who I am." The revival premiered on Broadway in April 2018, and The New York Times wrote, "Critics were underwhelmed by the production, but mesmerized by Ms. Ridloff." The revival was shuttered on May 27, 2018.[1]

Ridloff was a fan of the TV series The Walking Dead and submitted an audition tape to be cast in the series. She was cast as Connie and started her role in the show's ninth season, which premiered in October 2018.[10] In July 2019, Ridloff was cast in the 2021 Marvel Cinematic Universe superhero film Eternals as the superhero Makkari,[11] who in the comics is a hearing and white man. As part of director Chloé Zhao's approach to broaden casting representation, the casting of Ridloff revises the character to be a deaf woman of color.[12] The casting makes Ridloff the first deaf superhero in the MCU. To film for Eternals, Ridloff took a leave of absence from The Walking Dead, not appearing in six consecutive episodes of the show's tenth season.[13]

In 2020, Ridloff received the SAG-AFTRA Harold Russell Award at the 41st Media Access Awards.[14] In the same year, the British Academy of Film and Television Arts selected Ridloff as a 2020 Breakthrough performer along with 33 other talents in film, television, and games.[15]