Kyle Beach (born January 13, 1990) is a Canadian professional ice hockey player. As of 2021, he is under contract with Black Dragons Erfurt in the Oberliga. Beach played junior hockey for the Everett Silvertips of the Western Hockey League. Beach was selected by the Chicago Blackhawks in the first round (11th overall) of the 2008 NHL Entry Draft. Beach has spent most of his professional hockey career with the Rockford IceHogs of the AHL. At the start of the 2013–14 season, Beach briefly played for HV71 of the Swedish Elite League.

Beach is a power forward who plays a tough, physical game accompanied by offensive skill. After his first season in the Western Hockey League (WHL), he was named the league's Rookie of the Year.[1] His aggressive play led to multiple concussions and a sports hernia while playing for the Everett Silvertips.[2] After being named the 2006–07 WHL Rookie of the Year, Beach was projected to be a top five pick in the 2008 NHL Entry Draft. He was drafted 11th overall by the Chicago Blackhawks.[3] Later in his WHL career, Beach bounced around, spending time with the Lethbridge Hurricanes and the Spokane Chiefs.[4]

Beach made his professional debut with the Rockford IceHogs of the American Hockey League (AHL) at the end of the 2008–09 season.[5] Until the start of the 2013–14 season, Beach had spent his entire professional career with the IceHogs. During the Blackhawks' 2010 Stanley Cup run, Beach was called up to the Blackhawks' practice squad.[3] When HV71, of the Swedish Elite League ran into injury trouble, Beach joined the club for three weeks, appearing in seven games.[4] On December 6, 2013, Beach was traded to the New York Rangers for Brandon Mashinter.[6] He was assigned to the Rangers' AHL affiliate, the Hartford Wolf Pack, following the trade.[4]

In August 2014, Beach signed a tryout contract with EC Salzburg through the end of September.[7][8]

In the 2016–17 season, Beach enjoyed his most productive season as a professional, compiling 30 goals and 45 points in 54 games with the 99ers. However, after a short playoff-run, his contract with the 99ers was not renewed, resulting in his release as a free agent.[10]

His younger brother is NHL referee Cody Beach, who was born August 8, 1992. Cody was drafted by the St. Louis Blues in the 5th round of the 2010 NHL Entry Draft, and played as a prospect of the Blues in the American Hockey League with the Chicago Wolves.[12] His cousin is Rich Harden, a former Major League Baseball pitcher.[1] As a child, his favorite player was Jarome Iginla. 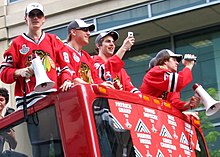 Beach, third from the left, celebrating with his teammates in Chicago after winning the 2010 Stanley Cup Finals.

On May 13, 2021, an unnamed former player filed a lawsuit alleging a prolonged sexual assault at the hands of then-video coach Brad Aldrich during an off-ice incident during the Chicago Blackhawks' 2010 Stanley Cup championship run. A subsequent investigation focused on two players, one of whom was referred to as "John Doe".

According to the investigation, on May 23, 2010, Blackhawks executives held a meeting about the sexual assault claims and decided they would not address them until after the Stanley Cup Playoffs.[13] The matter was not discussed again, and on June 14, 2010, five days after Chicago won the Stanley Cup, the Blackhawks human resources director gave Aldrich the option to resign or face termination if John Doe's claims turned out to be true. Aldrich chose to resign and was permitted to participate in postseason celebrations, according to the investigation findings.[14]

In October 2021, Beach gave an interview on SportsCentre confirming that he was John Doe, and spoke about his experiences with the Blackhawks organization after the fact.[15][16]