Kieffer Roberto Francisco Moore (born 8 August 1992) is a professional footballer who plays as a striker for Championship club Cardiff City and the Wales national team.

Moore started his career with Conference South club Truro City, having as a teen been a part of Torquay United's youth system and playing for South Devon League Division Two club Paignton Saints. Moore joined Dorchester Town in February 2013 due to Truro's continued financial difficulties, and he finished his first season in the Conference South with 20 goals. His goal-scoring record brought him to the attention of Yeovil Town for whom he signed in July 2013.

After making more than fifty appearances for Yeovil, Moore was released and had a brief spell with Norwegian club Viking before returning to English football with Forest Green Rovers. Moore had a loan spell back at his hometown club Torquay United where he scored five goals in four games, grabbing the attention of Championship club Ipswich Town, signing for the club in January 2017. Before the beginning of the 2017–18 season, Moore signed on loan for Rotherham United for whom he scored 13 goals in 20 matches. His form saw him recalled by Ipswich in January 2018, and he subsequently joined fellow Championship club Barnsley for an undisclosed fee.

Born in England, Moore played once for their non-league select team in 2016 but was eligible for Wales and China through ancestral affiliations, before making his senior debut for Wales in 2019; he was selected subsequently for the Welsh UEFA Euro 2020 finals squad and scored on his first appearance at the tournament.

Born in Torquay, Devon, Moore began his football career playing in the youth system of Torquay United until the age of 12 when the Devon outfit were forced to fold their youth programme.[3][4] Moore subsequently played for Paignton Saints in the South Devon League Division Two for whom he scored 47 goals in 43 matches across two seasons,[5][6] before in July 2012 he went on trial and subsequently signed for Conference South club Truro City.[7] On 18 August 2012, he made his debut for Truro City in a 2–1 defeat against Billericay Town.[8] Moore scored his first goal for Truro a week later in a 1–1 draw against Conference South leaders Salisbury City,[9] Moore scored for the second time in three days when he headed home a free-kick from player-manager Lee Hodges, in a 2–0 victory over Weston-super-Mare helping Truro to their first victory of the season.[10] The turn of the year saw Moore score seven goals in seven games in January and early February 2013, but after scoring the 80th-minute winner in Truro's 2–1 win over Hayes and Yeading it was announced that Moore was set to join fellow Conference South club Dorchester Town.[11] Moore left Truro City having scored 13 times in 24 appearances for the Cornish club, his manager Hodges described his transfer as "a really big loss" and that it "came out of the blue that he decided to leave".[12]

Moore joined Dorchester Town on 11 February 2013 on an 18-month contract,[13][14] making his debut the following day in a 3–2 win over Bath City.[15] Moore grabbed his first goal for Dorchester in the following match with a consolation goal in a 2–1 defeat against Basingstoke Town.[16] On 19 February 2013, Moore returned with Dorchester to his former club Truro City and scored a brace in a 2–1 victory for Dorchester to take his goal scoring tally to three goals in his first three matches for Dorchester.[17] Moore's 18th and 19th goals of the season came during Dorchester's 3–2 victory over AFC Hornchurch, two audacious goals first an impudent finish with his right foot and then repeating the feat with his left foot to give his team a late winner.[18][19] A thigh injury restricted Moore to just 13 appearances for Dorchester but he still managed to take his goal scoring tally to 20 goals for the season finishing as the Conference South's fourth top scorer. Moore's performances for Dorchester were enough for Football League club Charlton Athletic to offer him a trial in May 2013.[20]

He combined his non-league career with Truro and Dorchester with jobs as a lifeguard and personal trainer.[3]

In late June 2013, Moore joined newly promoted Football League Championship club Yeovil Town on trial for their pre-season.[21] On 6 July 2013, Dorchester Town confirmed they had agreed terms with Yeovil Town for the transfer of Moore for an "undisclosed fee", but that Moore had yet to agree personal terms or have a medical with the club.[22][23] Moore subsequently signed a two-year contract with Yeovil on 10 July 2013.[24] Moore made his debut for Yeovil as an 82nd-minute substitute in their Football League Cup first round victory over Southend United, on 6 August 2013.[25] On 14 September 2013, Moore made his Football League Championship debut for Yeovil against Sheffield Wednesday as an injury time substitute.[26] Moore scored his first senior goal for Yeovil, on 4 January 2014, in the FA Cup third round in a 4–0 victory against Leyton Orient.[27] Moore's first season in the Championship ended prematurely with a calf injury meaning he missed Yeovil's final three matches as they failed to avoid relegation back to Football League One.[28] Overall, he made 24 appearances for Yeovil in his first season scoring five times making him the club's joint third top goalscorer.

Moore was released by Yeovil at the end of the 2014–15 season following their relegation to League Two.[29]

On 3 August 2015, Moore signed for Norwegian Tippeligaen club Viking on a one-year contract.[30]

Having been made available for transfer Moore returned to England and spent time on trial with League Two clubs Exeter City,[31] and Leyton Orient.[32] On 18 January 2016, Moore signed for National League club Forest Green Rovers until June 2017.[33] He made his debut for the club on 23 January 2016, playing as a central defender in a 1–0 home win against Braintree Town.[34] His first goal for the club came in a 2–2 away draw at Barrow on 27 February 2016.[35] He helped Forest Green make it into the National League play-offs after finishing second in the division, and appeared as a substitute in the play-off semi-final second leg against Dover Athletic, producing an instrumental performance that helped the club reach the play-off final at Wembley.[36] He was denied the chance to appear in the play-off final defeat to Grimsby Town after rupturing his appendix the night after the semi-final second leg.[37]

On 17 November 2016, Moore joined fellow National League club Torquay United on a 28-day loan deal.[38] He scored an 88th-minute equaliser on his debut in a home 1–1 draw against Wrexham.[39] In his second appearance he scored his first career hat-trick in a 3–0 win over Solihull Moors.[40] 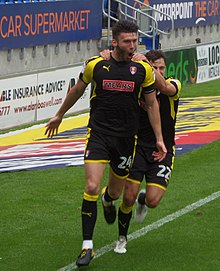 Moore celebrating scoring for Rotherham against Peterborough United in 2017

In his second season with Barnsley, Moore emerged as the Tykes' first choice striker, featuring in 31 matches and scoring 17 goals.[51] On 21 August 2018, Moore scored his first hat-trick for Barnsley against Rochdale in a 4–0 away win.[52] On 1 September 2018, Moore scored both goals in Barnsley's 2–1 victory over Gillingham, putting him on six goals in six games for the season.[53] He scored another brace against Sunderland on 27 November 2018 in a 4–2 defeat.[54] On 9 February 2019, Moore was involved in an aerial collision with Gillingham defender Gabriel Zakuani which resulted in Moore being down for 10 minutes and later taken to hospital.[55] On 28 February 2019, it was reported that he would miss the rest of the season with a serious head injury, though he made his return on 19 April 2019 against Shrewsbury Town.[56] On 24 April 2019, Moore was one of five Barnsley players named in the PFA Team of the Year for League One.[57]

On 5 August 2019, Moore signed for Championship club Wigan Athletic on a three-year deal for an undisclosed fee.[58] He scored his first goal for Wigan, a penalty, on 2 November 2019 in a 2–1 loss to Swansea City.[59] His goal against Reading in February 2020, saw Moore nominated for Championship goal of the month.[60]

On 14 July 2020, Moore scored twice as Wigan defeated Hull City by a scoreline of 8–0; the result was Wigan's biggest victory in club history.[61][62] Despite Moore's efforts, Wigan were relegated from the Championship due to a points deduction [63]

Moore signed for Championship club Cardiff City for an undisclosed fee on 13 August 2020.[64] He scored his first goals for the club on 19 September in his second appearance, netting a brace against Nottingham Forest in a 2–0 win.[65] Moore won the February 2021 PFA Player of the Month award after a run of five goals in seven matches.[66]

Moore is eligible for the Wales national team through his paternal grandfather, who hailed from Llanrug. The Chinese Football Association, however, had tried to get contact with the hope to get Moore into the Chinese team, using the Chinese ancestry of his maternal great-grandfather, who hailed from Guangdong before migrating to Liverpool in the 1940s; Moore later arrived at Beijing to discuss the matter in 2019 but the move failed to materialise.[67][68]

He received his first call-up to a Welsh national team training squad in May 2019.[69] On 10 October 2019, Moore scored his first international goal for the Wales national team in a UEFA Euro 2020 qualifying match against Slovakia.[70] Moore scored in each of his first three away internationals, with further goals in a 2–0 win over Azerbaijan on 16 November 2019 and the winner in a 1–0 win over Finland on 3 September 2020. Moore scored again against Finland on 18 November 2018, this time in a 3–1 victory in Cardiff in another Euro qualifier.[71][72]