"Khorramdin" redirects here. It is not to be confused with Babak Khorramdin. 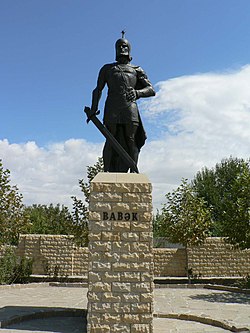 The Khurramites (Persian: خرمدینان‎ Khorram-Dīnân, meaning "those of the Joyful Religion") were an Iranian[1][2][3] religious and political movement with its roots in the movement founded by Mazdak.[3] An alternative name for the movement is the Muḥammira (Arabic: محمرة‎, "Red-Wearing Ones"; in Persian: سرخ‌جامگان‎ Sorkh-Jâmagân), a reference to their symbolic red dress.[citation needed]

The sect was founded in the 8th century CE by the Persian cleric Sunpadh and was a revitalization of an earlier sect that had mixed Shī‘a Islam[citation needed] and Zoroastrianism; however, its true claim to fame was its adoption by Bābak Khorramdin as a basis for rebelling against the Abbasid Caliphate.

The sect grew out of a response to the execution of Abu Muslim by the Abbasids, and denied that he had died, rather claiming that he would return as the messiah. This message was further confirmed by the appearance of a prophet named al-Muqanna‘ "The Veiled", who claimed that the spirit of God had existed in Muhammad, ‘Alī and Abu Muslim.

Under the leadership of Bābak, the Khurammites proclaimed the breakup and redistribution of all the great estates and the end to despotic foreign rule. Taking advantage of the turmoil created by the Abbasid civil war, in 816 they began making attacks on Muslim forces in Iran and Iraq. The Abbasid suppression of the rebellion led to the flight of many thousand Khurramites to Byzantium, where they were welcomed by emperor Theophilos and enrolled in the Byzantine army under their Iranian leader, Theophobos.

Al-Maqdisi mentions several facts. He observes that "the basis of their doctrine is belief in light and darkness"; more specifically, "the principle of the universe is Light, of which a part has been effaced and has turned into Darkness". They "avoid carefully the shedding of blood, except when they raise the banner of revolt". They are "extremely concerned with cleanliness and purification, and with approaching people with kindness and beneficence". Some of them "believed in free sex, provided that the women agreed to it, and also in the freedom of enjoying all pleasures and of satisfying one's inclinations so long as this does not entail any harm to others".[4] (their name is most frequently derived from the Persian word khurram "happy, cheerful"[5]). Regarding the variety of faiths, they believe that "the prophets, despite the difference of their laws and their religions, do not constitute but a single spirit".[4] Naubakhti states that they also believe in reincarnation (metempsychosis) as the only existing kind of afterlife and retribution and in the cancellation of all religious prescriptions and obligations. They highly revere Abu Muslim and their imams. In their rituals, which are rather simple, they "seek the greatest sacramental effect from wine and drinks". As a whole, they were estimated by Al-Maqdisi as "Mazdaeans... who cover themselves under the guise of Islam".

According to Turkish scholar Abdülbaki Gölpınarlı the Qizilbash ("Red-Heads") of the 16th century – a religious and political movement in Azerbaijan that helped to establish the Safavid dynasty – were "spiritual descendants of the Khurramites".[6]