James Khristian Middleton (born August 12, 1991) is an American professional basketball player for the Milwaukee Bucks of the National Basketball Association (NBA). He is a two-time NBA All-Star.

Middleton attended high school at the Porter-Gaud School in his hometown of Charleston, South Carolina. He played college basketball for the Texas A&M Aggies from 2009 to 2012. He earned second-team All-Big 12 honors after leading the Aggies in scoring with 14.3 points per game during his sophomore season.

Middleton declared for the 2012 NBA draft after his junior season and was selected by the Detroit Pistons with the 39th overall pick. He saw limited action with the Pistons and spent time with the Fort Wayne Mad Ants of the NBA Development League during his rookie season. Middleton was traded to the Milwaukee Bucks in 2013 and became an immediate contributor to the team. He received his first All-Star selection in 2019 and his second in 2020. In 2021, Middleton helped lead the Bucks to their first NBA championship since 1971.

Middleton was born on August 12, 1991 in Charleston, South Carolina to James and Nichelle Middleton. He has one older sister named Brittney, and his cousin, Josh Powell, has played in the NBA. Another cousin, Kenny Manigault, played basketball for Wichita State University and was teammates with Middleton on the Amateur Athletic Union (AAU) team Carolina Celtics.[1] Two other teammates on the Carolina Celtics accepted Division I basketball scholarships, Jamal Curry (Radford) and Devin Booker (Clemson).[2]

ESPN ranked him the 64th best prospect in the Class of 2009, and noted he was the best shooter at his position. Middleton was recruited by Texas A&M, Virginia Tech, South Carolina, Michigan, and Saint Joseph's.[2] He chose Texas A&M, and signed with the Aggies on May 30, 2008. He liked the college town atmosphere, and got along well with the coaching staff.[6]

Middleton was recruited by then Texas A&M assistant coach Scott Spinelli. Coming into his freshman year, Middleton expected to fill the three point shooting void of departed senior Josh Carter. Middleton's college career started slowly, connecting on 1-of-12 field goals in limited action of his first three games.[7] After a season-ending leg injury to Derrick Roland on December 11, 2009, Middleton was forced to take a larger role in the offense and started 18 of the last 20 games. On February 3, 2010, he scored 16 points to help Texas A&M erase an 11-point second half deficit to defeat Missouri 77–74.[8] In a 69-53 NCAA Tournament Round of 64 victory over Utah State, Middleton scored a season-high 19 points on 7-of-10 shooting.[9] Texas A&M's season ended with a loss in the Round of 32 to Purdue; the Aggies finished with a record of 24–10.[10] Overall, Khris Middleton averaged 7.2 points and 3.7 rebounds per game and led the team in scoring five times.[2]

As a sophomore, Middleton led the team and finished ninth in the Big 12 in scoring at 14.3 points per game while also contributing 5.2 rebounds per game. He hit 45 percent of his shots from the floor and 78.4 percent of his free throws. Middleton scored in excess of 10 points in 27 games and led the team in scoring 16 times.[2] He scored a career-high 31 points in a 71–62 overtime victory over Arkansas, including 11 of the team's last 12 points in regulation. This earned him Big 12 Player of the Week and Oscar Robertson National Player of the Week honors for the week of December 13–19, 2010.[11] On January 15, 2011, Middleton tallied 28 points, including 11 in overtime, to defeat Missouri 91–89.[12]

Middleton-led Texas A&M went 24-9 and lost in the NCAA Tournament Round of 64 to Florida State 57–50, in a contest in which Middleton contributed 16 points.[13] He was selected to the All-Big 12 Second Team at the conclusion of the regular season.[14] The U.S. Basketball Writers Association named Middleton to the 10-man All-District VII team covering college basketball players in the states of Texas, Arkansas, and Louisiana.[15] He was recognized as an All-Eighth District second-team selection by the National Association of Basketball Coaches making him eligible for the State Farm Division I All‐America teams.[16] Since the Big 12 Conference was its own district, this is equivalent to being named second team All-Big 12 by the NABC.[17] 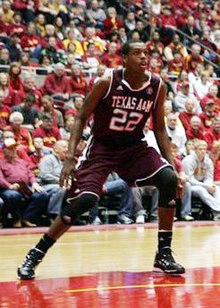 Middleton playing against Iowa State in 2012

Prior to Middleton's junior season, head coach Mark Turgeon left to take the same position at the University of Maryland and was replaced by Billy Kennedy of Murray State. Middleton was impressed with Kennedy's coaching acumen and chose to remain an Aggie.[18] He was listed on the preseason watchlist for the Wooden Award.[19] Middleton was a unanimous choice to the preseason All-Big 12 team.[20]

Despite being the preseason co-favorite in the league, Texas A&M finished 14-18 overall and 4–14 in the Big 12. The team was hampered by a rash of injuries, including a knee injury that forced Middleton to sit for 12 games. He averaged 13.2 points and 5.0 rebounds per game, down from the previous season. On April 9, 2012, Middleton declared for the NBA Draft, forgoing his final season of collegiate eligibility. He thanked Texas A&M in a statement.[21]

Middleton was selected by the Detroit Pistons with the 39th overall pick in the 2012 NBA draft. On August 15, 2012, he signed his rookie scale contract with the Pistons.[22] On December 12, 2012, he was assigned to the Fort Wayne Mad Ants of the NBA Development League (known now as the G League).[23] A week later, he was recalled by the Pistons.[24] He finished his rookie season having managed just 27 games for the Pistons while averaging 6.1 points, 1.9 rebounds and 1.0 assists in 17.6 minutes per game.

On December 15, 2014, the Bucks were down by one to the Phoenix Suns with under four seconds remaining in regulation as Middleton hit a contested game-winning buzzer beater to defeat the Suns, 96–94, with Middleton finishing with 14 points.[27] On March 7, 2015, he scored a then-career-high 30 points on 11-of-20 shooting in a 91–85 win over the Washington Wizards.[28] In his second season with the Bucks, Middleton emerged as an important "3-and-D" player, shooting 46.7 percent from the floor and 40.7 percent from behind the three-point arc. He averaged 13.4 points, 4.4 rebounds and 2.3 assists per game.[29]

Following the 2018–19 season, Middleton signed a five-year, $178 million contract extension with Milwaukee.[49] On January 28, 2020, Middleton set a new career-high, scoring 51 points, making 16 of 26 shots, including 7 of 10 on 3-pointers, in a 151–131 victory over the Washington Wizards. After the game, Middleton dedicated his performance to Kobe Bryant, who died two days prior in a California helicopter crash, saying “I definitely can dedicate that game to him as a thank you for what he did for the game”.[50] On January 30, 2020, Middleton was named an Eastern Conference All-Star reserve, thus earning his second consecutive All-Star selection.[51] On February 24, Middleton scored 40 points in a 137–134 overtime win over the Wizards.[52] Middleton missed a game against the Oklahoma City Thunder on February 28 due to neck soreness.[53] In the postseason, Middleton and the Bucks were eliminated in the Semi-Finals by the eventual Eastern Conference champion Miami Heat in five games.[54] Middleton scored a playoff career-high 36 points, along with 8 rebounds and 8 assists, in the lone Milwaukee victory in Game 4.[55]

The following season, the Bucks would again face the Heat in the playoffs, this time in the First Round. In Game 1, Middleton capped off a 27-point, 6-rebound and 6-assist performance with a game-winning fadeaway jumper with 0.5 seconds left in overtime, to lift Milwaukee to a 109–107 victory and a 1–0 series lead. The Bucks would go on to win the series in 4 games.[56] In Game 6 of the Conference Semifinals against the Brooklyn Nets, Middleton dropped a playoff career-high 38 points, alongside 10 rebounds, five assists, and five steals in a 104–89 victory.[57] In Game 3 of the Conference Finals against the Atlanta Hawks, Middleton tied his career-high 38 points, alongside 11 rebounds and seven assists in a 113–102 victory.[58] In Game 6 of the Conference Finals against the Hawks, Middleton dropped 32 points in a 118–107 win, leading the Bucks to the NBA Finals for the first time since 1974.[59] In Game 4 of the Finals, he scored a playoff career-high 40 points to help defeat the Phoenix Suns.[60] In Game 6, Middleton recorded 17 points, 5 rebounds and 5 assists, and made crucial baskets in the final minutes of the game to put away the Suns 105–98, closing out the series 4–2, securing the Bucks’ first NBA title in fifty years, and giving Middleton his first championship.[61]

Middleton is a Christian.[62]

On July 7, 2015, Middleton penned a column in The Players' Tribune about the Charleston church shooting. He explained that the shooting affected him deeply because he grew up in Charleston and his grandmother Juanita knew four of the nine people who died. Middleton had met one of the victims, Cynthia Hurd, as she dropped her nephew off at a basketball camp not long before the shooting. "In Charleston, we're staying strong, but the wounds are still deep," he wrote.[62]

On April 23, 2019, Middleton and his girlfriend Samantha Dutton welcomed their first daughter, Audrielle. In order to be there for the birth, Middleton got on a plane to Milwaukee with Bucks co-owner Marc Lasry immediately after a playoff win over the Detroit Pistons. [63]

On March 13, 2020, Middleton said he would match Giannis Antetokounmpo's $100,000 donation to the staff of the Fiserv Forum who were unable to work during the suspension of the 2019–20 NBA season because of the COVID-19 pandemic.[64]

On April 8th, 2021, it was announced that he was joining the ownership group of the Brisbane Bullets, a professional basketball team in Australia. [65]