Kevin Joseph Huerter (/ˈhərtər/; born August 27, 1998) is an American professional basketball player for the Atlanta Hawks of the National Basketball Association (NBA). He played college basketball for the Maryland Terrapins.

Kevin Huerter, a 6-foot-7-inch (2.01 m) shooting guard, played at Shenendehowa High School in Clifton Park, New York, a suburb of Albany located in Saratoga County. During his career, he led the school to its second state championship and, as a senior, was named Mr. New York Basketball.[1]

On September 7, 2015, he committed to play college basketball for Maryland, choosing the Terrapins over 20 offers.[2] By the end of his high school career, Huerter was considered a four-star recruit. 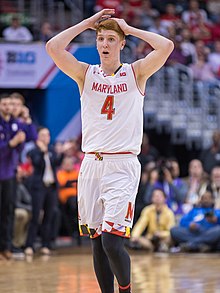 He earned a starting position as a freshman, averaging 9.3 points and 4.9 rebounds per game on the season.[3] Following his freshman season, Huerter was selected to the United States team for the 2017 FIBA Under-19 Basketball World Cup, where the team finished third.[4]

As a sophomore, Huerter increased his production, scoring 14.8 points and averaging 5 rebounds per game. At the close of the season, he was named honorable mention All-Big Ten.[5]

Following his sophomore season at Maryland, Huerter declared his eligibility for the 2018 NBA draft without an agent.[6] He was selected to participate in the NBA Draft Combine.[7] After working out with the Los Angeles Lakers, Huerter opted to hire an agent and remain in the NBA draft, forgoing his final two years of college eligibility on May 30, 2018.[8]

Huerter was raised in Clifton Park, New York, by his parents Tom and Erin Huerter.[14] He has a brother (Thomas Jr.) and two sisters (Meghan and Jillian).[14] His father played college basketball for Siena College,[15] and his brother has also played for them.[16][17]

Huerter's basketball hero is Dwyane Wade, and he wears jersey #3 in his honor.[25]