Kelly Kamalelehua Smith[1][2] (the middle name "Kamalelehua" means "garden of lehuas" in Hawaiian)[3][4] was born in Honolulu, Hawaii. Her mother, Linda, was an administrator of a mental health center. Her father, who worked for an agricultural firm, drowned when Preston was three years old.[5][6][7] Her mother subsequently married Peter Palzis, a personnel director. He adopted Preston, and she used his name at the start of her acting career.[8][9] She also had a younger half-brother, Chris Palzis.[8]

As a child, Preston lived in Iraq,[10] and also Australia,[11] where she attended Pembroke School, Adelaide.[citation needed] She then attended Punahou School in Honolulu, graduating in 1980,[12] and studied drama and theater at the University of Southern California.[13]

While living in Australia, Preston was discovered at age 16 by a fashion photographer who helped her get work in commercials and other small parts.[8] He arranged her first film audition for the role of Emmeline in The Blue Lagoon (1980), which she lost to the younger Brooke Shields.[14] At that time she changed her last name to Preston.[15]

Her first prominent film roles came in 1985—first as Marilyn McCauley in romantic comedy teen flick Mischief; then as the beautiful but shallow Deborah Ann Fimple in another teen romantic comedy, Secret Admirer. Her other roles included SpaceCamp (1986), Twins[16] (1988) with Arnold Schwarzenegger and Danny DeVito, Avery Bishop in Jerry Maguire (1996) with Tom Cruise, Jane Aubrey in For Love of the Game with Kevin Costner and Kate Newell, and in Holy Man (1998) with Eddie Murphy and Jeff Goldblum. In 1997, she starred in Nothing to Lose, which co-starred Tim Robbins and Martin Lawrence, although Lawrence and Preston did not receive screen credit. She also starred in the movie Jack Frost (1998).

Preston played the girlfriend of her husband John Travolta's character Terl in the film Battlefield Earth (2000),[17] and received "Worst Supporting Actress" at the 21st Golden Raspberry Awards for her role in the film.[18] She appeared as the protagonist's flying, superhero mother in the film Sky High (2005).[19] 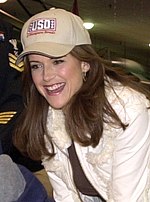 In 2004, Preston was in the Maroon 5 music video "She Will Be Loved", which featured a love triangle and romantic scenes between Preston and Maroon 5 front man Adam Levine. Preston appeared in the crime thriller Death Sentence (2007), in which she played Helen Hume, the wife of Kevin Bacon's character Nick. In 2008, she was cast in a television pilot called Suburban Shootout,[20] and had a short term recurring role in Medium.[20]

Preston was a spokeswoman for Neutrogena, appearing in its print and television ads.[22][23]

Preston's final film role will be in the comedy-drama Off the Rails, which is set to be released in 2021.

Preston first met John Travolta in 1987 while filming The Experts.[29] They married in 1991, traveling to Paris on an Air France Concorde for a wedding ceremony at the Hotel de Crillon (on the Place de la Concorde) on September 5, 1991. However, a second ceremony was required because the first, performed by a French Scientology minister (both Preston and Travolta were Scientologists), was considered invalid. The second ceremony took place on September 12 in Daytona Beach, Florida.[30] Preston and Travolta had three children: son Jett (April 13, 1992 – January 2, 2009), daughter Ella Bleu (born April 3, 2000)[31], and a second son, born 2010.[32][33] Preston remained a Scientologist until her death.[34]

Preston's son Jett Travolta was described as suffering from Kawasaki disease as an infant and had a history of seizures.[35][36] In 2003, Preston appeared on The Montel Williams Show to promote L. Ron Hubbard's Purification Rundown, which she credited with helping her son.[37]

On January 2, 2009, Jett Travolta died while the family was vacationing in the Bahamas.[38][39] His death was attributed to a seizure.[40] In September 2009, Travolta and Preston confirmed longstanding speculations when they testified that their son had autism and suffered regular seizures. This transpired during their testimony at the trial resulting from an extortion attempt related to their son's death.[41]

On January 23, 2009, three people were arrested in the Bahamas in connection with a multimillion-dollar extortion plot against Travolta and Preston concerning the circumstances of their son's death.[42] One of the men, Obie Wilchcombe, a member of the Bahamian Parliament and former Bahamian Minister of Tourism, was described as a "close friend" of Travolta and Preston.[42] Two others allegedly involved were an EMT named Tarino Lightbourne and a Bahamian senator named Pleasant Bridgewater. Bridgewater was charged with abetment to extort and conspiracy to extort and resigned from the Senate as a result of the allegations.[42][43] The first trial ended in a mistrial. After a second jury had been selected, the Travoltas elected to drop the case and all charges against the defendants were dismissed.[44]

On July 12, 2020, Preston died at the age of 57 in Clearwater, Florida,[45] two years after she had been diagnosed with breast cancer.[46][47][48][49] Her diagnosis was not widely publicized.[46] Preston had been receiving treatment at the MD Anderson Cancer Center in Houston, Texas; she had also been treated at other medical centers.[50][51] Her death was announced in an Instagram post under an account belonging to John Travolta and Ella Bleu.[52]