Kadambini Ganguly (18 July 1861 – 3 October 1923[1]) was one of the first Indian female doctors who practised with a degree in modern medicine. She was the first Indian woman to practice medicine in India. Ganguly was the first woman to gain admission to Calcutta Medical College in 1884, subsequently trained in Scotland, and established a successful medical practice in India.

Ganguly was born Kadambini Basu daughter of Brahmo reformer Braja Kishore Basu, she was born on 18 July 1861[2] at Bhagalpur, Bengal Presidency (modern day Bihar) in British India, raised in Barisal. The family was from Chandsi, in Barisal which is now in Bangladesh. Her father was headmaster of Bhagalpur School. He and Abhay Charan Mallick started the movement for women's emancipation at Bhagalpur, establishing the women's organisation Bhagalpur Mahila Samiti in 1863, the first in India.

Despite coming from an upper caste Bengali community that did not support women's education,[3] Kadambini initially received English education at the Brahmo Eden Female School, Dacca; subsequently at Hindu Mahila Vidyalaya, Ballygunj Calcutta which was renamed as Banga Mahila Vidyalaya in 1876. The school merged with Bethune School (established by Bethune) in 1878 and she became the first woman to pass the University of Calcutta entrance examination. She passed the FA exam in 1880. It was partly in recognition of her efforts that Bethune College first introduced FA (First Arts), and then graduation courses in 1883. She and Chandramukhi Basu became the first graduates from Bethune College, and also the first female graduates in the country.[a][6]

Please note this is about the text of this Wikipedia article; it should not be taken to reflect on the subject of this article.

Do not restore or edit the blanked content on this page until the issue is resolved by an administrator, copyright clerk or OTRS agent.

If you have just labeled this page as a potential copyright issue, please follow the instructions for filing at the bottom of the box.

The previous content of this page or section has been identified as posing a potential copyright issue, as a copy or modification of the text from the source(s) below, and is now listed at Copyright problems (listing):

https://medium.com/sci-illustrate-stories/kadambini-ganguly-5205bdab05c7 (which is mirrored on https://english.gnptimes.in/kadambini-ganguly-first-female-doctor-to-practice-western-medicine/) (Duplication Detector report · Copyvios report)
Unless the copyright status of the text of this page or section is clarified and determined to be compatible with Wikipedia's content license, the problematic text and revisions or the entire page may be deleted one week after the time of its listing (i.e. after 19:45, 28 July 2021 (UTC)).

Temporarily, the original posting is still accessible for viewing in the page history.

Can you help resolve this issue?
Further information: Wikipedia:Copyright problems § Responding to articles listed for copyright investigation
If you hold the copyright to this text, you can license it in a manner that allows its use on Wikipedia. Click "Show" to see how.
You can demonstrate that this text is in the public domain or is already under a license suitable for Wikipedia. Click "Show" to see how.
Explain this on this article's discussion page, with reference to evidence. Wikipedia:Public domain and Wikipedia:Compatibly licensed may assist in determining the status.
Otherwise, you may rewrite this page without copyright-infringing material. Click "Show" to read where and how.

Your rewrite should be placed on this page, where it will be available for an administrator or clerk to review it at the end of the listing period. Follow this link to create the temporary subpage.

State that you have created a rewrite on this article's discussion page.
About importing text to Wikipedia
Further information: Wikipedia:Copying text from other sources
Instructions for filing

If you have tagged the article for investigation, please complete the following steps:

|fullpage = Long before graduating school, Ganguly had decided to go to the clinical school. Madras Medical College had begun admitting female undergraduates in 1875, while the Calcutta Medical College (CMC) didn’t permit any females to enter. Ganguly and her husband, Dwarkanath Ganguly, volunteered to change this standard. Kadambini became the first woman to attempt gaining admission in the CMC in 1884. She even acquired a cooperation of Rs. 20 per month from the public authority.[citation needed]

Ganguly joined the medical college on 23 June 1883 despite strong criticism from the society opposing women liberation. She received a scholarship of Rs. 15 for two years.[7] In 1886, she was awarded GBMC and became the first practising woman physician with a degree in modern medicine in the whole of South Asia. This attracted the attention of Florence Nightingale, who in 1888 wrote to a friend asking for more information about Ganguly.[3]

The possibility of a female turning into a specialist was not invited by the customary society; indeed, even some teachers at the CMC were not content with the incorporation of ladies, to such an extent that one teacher did not allow Ganguly to pass one of her subjects. As a consequence, rather than a MB degree, Ganguly was granted the Graduate of Medical College of Bengal (GMCB) degree in 1886.

The same year, Ganguly was selected to Lady Dufferin Women’s Hospital in Calcutta. There, she felt that she was being looked down upon on by the individual specialists, as she did not have an MB degree. She understood that she required more capabilities to gain the respect of her companions. In 1893, she travelled to Edinburgh, where she studied at the Edinburgh College of Medicine for Women. Since she already possessed several prior qualifications, Ganguly was able to obtain a 'triple diploma' in a short time,[8] being licensed as LRCP (Edinburgh), LRCS (Glasgow) and GFPS (Dublin).[9] On her return to India, she was elevated to the position of senior specialist, and began a successful private practice. She visited Nepal in 1895 to successfully treat the mother of the reigning Nepalese monarch, Dev Shumsher Jang Bahadur Rana.[8][10]

Ganguly was an active campaigner for social change in India. She was one of six female delegates to the fifth session of the Indian National Congress in 1889, and organised the 1906 Women's Conference in Calcutta after the Partition of Bengal. Ganguly was also successful in pressuring Calcutta Medical College to allow more women as students.[8] 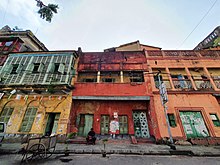 Kadambini Ganguly married Dwarakanath Ganguly on 12 June 1883, 11 days before joining Calcutta Medical College.[11][full citation needed] As the mother of eight children, she had to devote considerable time to her household affairs. She was deft in needlework.[8] Among her children, Jyotirmayee was a freedom fighter and Prabhat Chandra was a journalist.

American historian David Kopf[12] notes that Ganguly "was appropriately enough the most accomplished and liberated Brahmo woman of her time", and her relationship with her husband Dwarkanath Ganguly "was most unusual in being founded on mutual love, sensitivity and intelligence." Kopf argues that Ganguly was highly unusual even among emancipated women of contemporary Bengali society, and that "her ability to rise above circumstances and to realize her potential as a human being made her a prize attraction to Sadharan Brahmos dedicated ideologically to the liberation of Bengal's women."[13]

Ganguly died on October 3, 1923, after having conducted an operation the same day.[8]

Ganguly was heavily criticised by conservative society of her time. After returning to India from Edinburgh and campaigning for women's rights, she was indirectly called a 'whore' in the Bengali magazine Bangabashi. Her husband Dwarkanath Ganguly took the case to court and won, with a jail sentence of 6 months meted out to the editor Mahesh Pal.[9][14]

A Bengali television serial Prothoma Kadambini based on Ganguly's biography was telecast on Star Jalsha beginning in March 2020, starring Solanki Roy and Honey Bafna in the lead.[15] Another Bengali series named Kadambini, starring Ushasi Ray as Ganguly, was telecast on Zee Bangla in 2020.