Jyotiraditya Madhavrao Scindia (born 1 January 1971) is an Indian politician. He belongs to the House of Scindia that once ruled in Gwalior and a Member of Parliament in the Rajya Sabha representing the State of Madhya Pradesh. He is a former Member of Parliament in the Lok Sabha, representing the Guna constituency in Madhya Pradesh until his defeat in the 2019 Indian general election. He is a former member of the Indian National Congress (INC) and presently a member of the Bharatiya Janata Party (BJP).

While a member of the INC, Scindia was a Minister of State with independent charge for Power in the cabinet of prime minister Manmohan Singh from October 2012 until May 2014. In March 2020, he severed all ties with Congress and joined BJP.

Scindia was born on 1 January 1971 in Bombay to Madhavrao Scindia and Madhavi Raje Scindia. He claims to belong to the Kurmi caste.[1][2] He was educated at Campion School, Mumbai and at The Doon School, Dehradun.[3]

Scindia was admitted to St. Stephen's College, Delhi, University of Delhi. He later transferred to Harvard College, the undergraduate liberal arts college of Harvard University, where he graduated with BA degree in Economics in 1993. In 2001, he received a Master of Business Administration from the Stanford Graduate School of Business.[4][5]

Scindia is a grandson of Jivajirao Scindia, the last Maharaja of the princely state of Gwalior, who, although joining the Dominion of India in 1947, was allowed his former titles and privileges, including an annual remuneration called the privy purse. Upon his death in 1961, his son, Madhavrao Scindia (Jyotiraditya's father) became titular Maharajah of Gwalior, as the 26th amendment[6] to the Constitution of India promulgated in 1971, the Government of India abolished all official symbols of princely India, including titles, privileges, and privy purses.[7]

Scindia's mother, Madhavi Raje Scindia (Kiran Rajya Lakshmi Devi), was great-granddaughter of the Prime Minister of Nepal and Maharaja of Kaski and Lamjung, Juddha Shamsher Jang Bahadur Rana, a patrilineal descendant of Ramakrishna Kunwar of Gorkha. He is married to Priyadarshini Raje Scindia (nee Gaekwad) of the Gaekwad family of Baroda.[citation needed] His grandmother, Vijayraje Scindia, was among the BJP's founder members.[8] He has a son and a daughter.[citation needed]

On 30 September 2001, the Guna constituency fell vacant due to the death of Scindia's father the sitting MP Madhavrao Scindia in an airplane crash in Uttar Pradesh.[9] On 18 December, he formally joined the INC and pledged to uphold the "secular, liberal and social justice values" of his father.[10]

On 24 February, Scindia won the by-election in Guna, defeating his nearest rival, Desh Raj Singh Yadav of the BJP, by a margin of approximately 450,000 votes.[11] He was re-elected in May 2004,[12] and was introduced to the Union Council of Ministers in 2007 as Minister of State for Communications and Information Technology. He was then re-elected in 2009 for a third consecutive term and became Minister of State for Commerce and Industry.[13]

Scindia in 2008 as Minister of State for Communications & Information Technology

Scindia was appointed Minister of State for Power in November 2012 in a cabinet reshuffle which drafted a number of younger politicians into the Indian cabinet, including two other scions of princely families, R. P. N. Singh and Jitendra Singh.[14]

Scindia was among the richest ministers in the UPA government with assets nearly Rs. 25 crore ($5 million) including investments in Indian and foreign securities worth over ₹16 crore (US$2 million) and jewellery worth over ₹5.7 crore (US$799,140).[15] In 2010, he filed a legal claim to be the sole inheritor of the property belonging to his late father worth ₹20,000 crore (US$3 billion), however this was challenged in court by his aunts.[16][clarification needed]

Scindia was tasked by the Indian Planning Commission with preventing a repetition of the July 2012 India blackout, the largest power outage in history, which affected over 620 million people, about 9% of the world population,[17][18][19] In May 2013, Scindia claimed that checks and balances had been put in place to prevent any recurrence of grid collapse and that India would have the world's largest integrated grid by January 2014.[20]

Citing disgruntlement with the INC leadership, he quit the party on 10 March 2020 to join the BJP. The party then released a statement claiming that he had been expelled for "anti-party activities". He later joined the BJP on 11 March 2020.[23][24] Other MLAs loyal to him also resigned from the INC and their MLA posts in a political crisis that led to the resignation of Kamal Nath as Chief Minister.

Scindia is chairman of the regional Madhya Pradesh Cricket Association (MPCA) in India.[26] After the spot fixing scandal in the Indian Premier League exploded in the media and Sanjay Jagdale, a member of the MPCA resigned from his job as secretary from the Board of Control for Cricket in India, Scindia spoke out against corruption in Indian cricket.[27] 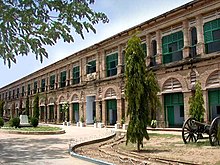 The Scindia School of which Jyotiraditya is President of the Board of Governors.

Scindia is President of the Board of Governors of Scindia School, Gwalior, which was founded by his great-grandfather, Madho Rao Scindia, in 1897.[28][29]

Daly College, Indore, of which Scindia is a hereditary patron.

He is also a hereditary patron of Daly College, Indore, which was established in 1882 to educate the children of the royalty, nobility and aristocracy of Central Indian princely states.[30]

Scindia is chairman of Madhav Institute of Technology and Science one of the most prominent Engineering College of Gwalior Chambal Region which was founded in 1957.[31]