Justin Patrick Herbert (born March 10, 1998) is an American football quarterback for the Los Angeles Chargers of the National Football League (NFL). He played college football for the Oregon Ducks, where he won the 2019 Pac-12 Championship and was named MVP of the 2020 Rose Bowl.[2] He was selected by the Chargers sixth overall in the 2020 NFL Draft.[3]

Herbert became the Chargers starting quarterback in the second game of his rookie year after Tyrod Taylor suffered a punctured lung in pre-game.[4][5] He remained the starter for the rest of the season and set several rookie statistical records, including the most touchdown passes and the most 300-yard games, and was named the AP NFL Offensive Rookie of the Year as a result.[6]

Herbert was born in Eugene, Oregon, on March 10, 1998, and attended Sheldon High School, where he played football, basketball, and baseball.[7] He suffered a broken leg in the third game of his junior season, complicating his recruitment process. As a senior, he passed for 3,130 yards and 37 touchdowns, and rushed for 543 yards and 10 touchdowns. [8] He was named 1st Team All-State[9] and the Southwest Conference Offensive Player of the Year,[10] yet initially received no scholarship offers from major college programs. Northern Arizona, Portland State, and Montana State extended offers before Nevada and Oregon followed up with his only FBS offers.[11] Herbert committed to Oregon in October 2015.[12] 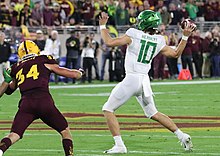 Herbert (right) in a game against Arizona State, 2019

Entering his true freshman season listed as QB2 on the depth chart,[13] Herbert became the first true freshman at Oregon to start at Quarterback since Chris Miller in 1983 when the Ducks took on arch-rivals Washington on October 8, 2016.[14] Despite Herbert setting or equaling Oregon's single-game records for total offensive yards (512), passing yards (489), and touchdown passes (6),[15] the Ducks finished with their worst season in 25 years, going 4–8 and failing to make a bowl game for the first time in over a decade.[16]

Herbert became the starting quarterback after the fifth game of the season and showcased his talents throwing for 1,936 yards including 19 touchdowns with just four interceptions in eight starts.[15] He led a come-from-behind upset at #11 Utah with four touchdowns in the final 15:27 of the game to overcome a 14–3 deficit. On the final drive, he completed 6-of-9 passes for 63 yards with a 17-yard game-winning TD pass with two seconds left.[17]

The Ducks entered the 2017 season with new head coach Willie Taggart.[18] Leading the Ducks to a 4–1 start, Herbert's transition from the Chip Kelly/Mark Helfrich-era's “Blur Offense” to Taggart's “Gulf Coast Offense” was successful before he fractured his collarbone against Cal on September 30, 2017.[19]

Without Herbert in the lineup, the Ducks dropped four of their next five games, and the offense went from averaging 49.2 points per game to just 15.0 points per game.[20] Herbert returned to help the Ducks win their last two regular season games to become bowl eligible.[21] The Ducks were selected to play Boise State in the Las Vegas Bowl but their performance fell flat and the Ducks lost 38–28 after head coach Willie Taggart left the team to become the head coach at Florida State a week before their bowl game.[22][23]

In eight starts, Herbert had a 6–2 record and threw for 1,983 yards on 139-of-206 passing attempts (67.5%), including 15 touchdowns against only five interceptions. He also rushed the ball 44 times for 183 yards and five touchdowns.[24] Herbert was named first-team CoSIDA Academic All-American with a 4.08 grade-point average in biology.[25]

Herbert entered his third collegiate season as an early Heisman Trophy candidate despite being coached by a third different head coach as well as navigating his third different offensive scheme with new head coach Mario Cristobal transitioning from the spread offense to the pistol offense.[26][27] Herbert led the Ducks to a 9–4 record and a victory in the Redbox Bowl. He finished the year with 3,151 passing yards, 29 passing touchdowns, and two rushing touchdowns. His 31 total touchdowns were good for second in the Pac-12 Conference behind Washington State's Gardner Minshew.[28] He was named to the Pac-12 All-Academic first-team.[29]

Despite projecting as a high draft pick,[30] Herbert announced that he would return to Oregon for his senior season.[31] He led the Ducks to a 12–2 record, including a win in the Rose Bowl where he ran for three touchdowns and was named Offensive MVP.[32] In his best statistical collegiate season, Herbert totaled 3,471 passing yards, 32 passing touchdowns, and four rushing touchdowns. In addition to his on-field success, Herbert was named the 30th recipient of the William V. Campbell Trophy, also referred to as the "Academic Heisman".[33]

Herbert was selected sixth overall by the Los Angeles Chargers in the first round of the 2020 NFL Draft. He was the third quarterback taken, behind Joe Burrow and Tua Tagovailoa.[46] On July 25, 2020, Herbert signed his four-year rookie contract, worth a fully guaranteed $26.6 million.[47] His Los Angeles Chargers jersey was the 12th best selling jersey to start the 2020 NFL season.[48] Herbert was named the backup quarterback behind starter Tyrod Taylor ahead of the 2020 NFL season.[49]

On September 20, 2020, Herbert made his first NFL start in Week 2 against the Kansas City Chiefs, replacing Taylor, who was ruled inactive after the team's doctor accidentally punctured his lung.[50] He finished with 311 passing yards, one touchdown, one interception, and one rushing score as the Chargers lost 20–23 in overtime.[51] He became only the third player in NFL history to pass for at least 300 yards and rush for a touchdown in his first career game.[52] During Week 4 against the Tampa Bay Buccaneers, Herbert completed 20 passes out of 25 attempts for 290 yards, three touchdowns, and an interception as the Chargers lost 31–38.[53] On October 8, 2020, Herbert was named the starting quarterback for the Chargers over Tyrod Taylor going forward.[54][55]

In Week 5 against the New Orleans Saints on Monday Night Football, Herbert threw for 264 yards and four touchdowns during the 30–27 overtime loss.[56] He became the first rookie in NFL history to throw for four touchdown passes on Monday Night Football.[57] Herbert was named Offensive Rookie of the Month after throwing 10 touchdowns to one interception in three starts with 901 passing yards and a 122.2 passer rating.[58] He also became the first rookie quarterback in NFL history with multiple touchdowns in seven consecutive games.[59] Herbert was named the Offensive Rookie of the Month for his performance in November.[60]

On December 27, 2020, Herbert threw his 28th passing touchdown of the season against the Denver Broncos, breaking the NFL record for most passing touchdowns by a rookie (previously held by Baker Mayfield) during the 19–16 win.[61] During the game, he also reached 4,000 yards passing for the season, becoming only the fourth rookie quarterback to achieve the feat (the others are Cam Newton in 2011, Andrew Luck in 2012, and Jameis Winston in 2015). He was named Rookie of the Year and Offensive Rookie of the Year by the Pro Football Writers of America.[62]

Herbert's grandfather, Rich Schwab, played receiver at Oregon in the 1960s.[26] Herbert was a San Diego Chargers fan growing up.[63] He graduated from Oregon with a bachelor's degree in general science. He was awarded the 2019 William V. Campbell Trophy, which recognizes excellence in academics, athletics, and leadership.[64] Herbert's younger brother, Patrick, also attends Oregon as a tight end for the Ducks and his older brother, Mitchell, played wide receiver at Montana State. [65]