Jussie Smollett (/ˈdʒʌsi/ /sməlˈɛt/, born June 21, 1982)[1] is an American actor and singer. He began his career as a child actor in 1991, acting in films such as The Mighty Ducks (1992) and Rob Reiner's North (1994). In 2015, Smollett portrayed musician Jamal Lyon in the Fox drama series Empire, a role that was hailed as groundbreaking for its positive depiction of a Black gay man on television. Smollett has also appeared in Ridley Scott's science fiction film Alien: Covenant (2017) as Ricks and in Marshall (2017) as Langston Hughes.

In January 2019, Smollett staged a fake hate crime against himself in Chicago and later made false police reports regarding the incident. In December 2021, Smollett was convicted of five felony counts of disorderly conduct;[2] he was sentenced in March 2022 to 150 days in county jail.[3] He has since been released on bond while his case is on appeal.[4]

Jussie Smollett was born in Santa Rosa, California,[5] the son of Joel and Janet (née Harris) Smollett. He has three brothers and two sisters: Jake, Jocqui, Jojo, Jurnee, and Jazz, several of whom are also actors.[6] Smollett is biracial.[7] His mother is African-American, and his father is Jewish.[8] He has said that his father would "kill you if you called him white". His father was absent from his life for a significant portion of his childhood.[9] The family moved to the Elmhurst neighborhood of the New York City borough of Queens when he was two years old, then to Los Angeles when he was about seven.[5] Smollett graduated from Paramus Catholic High School in Paramus, New Jersey.[5][10] When he was 19, Smollett told his parents he was gay.[9] 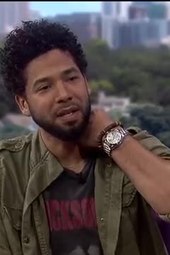 Play media
Smollett talking in a 2018 interview on Sister Circle

In 2014, Smollett was cast as Jamal Lyon—a gay musician struggling to gain the approval of his father Lucious—opposite Taraji P. Henson and Terrence Howard in the Fox drama series Empire.[14][15][16] His role was hailed as groundbreaking for its positive depiction of a Black gay man on television.[17] Smollett reprised his role in subsequent seasons[18] and directed an episode of the fourth season in 2017.[19] Smollett's character was removed from the final two episodes of season five because of the assault controversy.[20][21]

In February 2015, Smollett confirmed that he had signed a recording contract with Columbia Records and would be releasing an album in the future.[22] Smollett co-wrote the songs "I Wanna Love You" and "You're So Beautiful" on the Original Soundtrack from Season 1 of Empire album, which was released in March 2015.[23]

In June 2015, it was announced that Smollett would guest-star alongside his younger sister Jurnee in Underground, which aired in 2016.[24] Smollett released his debut album, Sum of My Music, in March 2018.[25] Sum of My Music is an R&B album that features elements of electronic music and hip hop. Smollett self-released it through his own label, Music of Sound.[26]

On April 30, 2019, Fox Entertainment announced that though Smollett's contract had been extended for the sixth season of Empire, there were no plans for his character to appear during it.[20][27]

Smollett directed B-Boy Blues, a movie based on the 1994 Black gay novel by James Earl Hardy. The movie was released in November 2021.[28]

On January 29, 2019, Smollett told police that he was attacked outside his apartment building by two men in ski masks. He reported they talked to him using racial and homophobic slurs and said, "This is MAGA country", a reference to President Donald Trump's slogan "Make America Great Again".[29] He claimed they used their hands, feet, and teeth as weapons in the assault.[30][31] According to a statement released by the Chicago Police Department, the two suspects then "poured an unknown liquid" on Smollett and put a noose around his neck.[32] Smollett said that he fought them off. Smollett was treated at Northwestern Memorial Hospital; not seriously injured, he was released "in good condition" later that morning.[29][33][34] The police were called after 2:30 a.m.;[35] when they arrived around 2:40 a.m., Smollett had a "thin, white rope" around his neck.[36] Smollett said that the attack may have been motivated by his criticism of the Trump administration[37] and that he believed that the alleged assault was linked to the threatening letter that was sent to him earlier that month.[38] A subsequent investigation found that Smollett paid two brothers who were work acquaintances of his to stage the assault.[39][40]

On February 20, 2019, Smollett was charged by a grand jury with a class 4 felony for filing a false police report.[41][42][43] The next day, Smollett surrendered himself at the Chicago Police Department's Central Booking station.[44] Shortly thereafter, CPD spokesman Anthony Guglielmi stated that Smollett "is under arrest and in the custody of detectives".[45] On March 26, 2019, all charges filed against Smollett were dropped, with Judge Steven Watkins ordering the public court file sealed.[46][47] First Assistant State's Attorney Joseph Magats said the office reached a deal with Smollett's defense team in which prosecutors dropped the charges upon Smollett performing 16 hours of community service[48][49][50] and forfeiting his $10,000 bond.[51][52][53]

On April 12, 2019, the city of Chicago filed a lawsuit in the Circuit Court of Cook County against Smollett for the costs, totaling $130,105.15, of overtime authorities expended investigating the hoax.[54][55][56][57] In November 2019, Smollett filed a countersuit against the city of Chicago alleging he was the victim of "mass public ridicule and harm" and arguing he should not be made to reimburse the city for the cost of the investigation.[58]

After the charges were dropped, allegations of favoritism and leniency were made against prosecutor Kim Foxx. In June 2019, Foxx asked the state to conduct an independent inquiry by a special investigator.[59] On February 11, 2020, after further investigation by a special prosecutor was completed, Smollett was indicted again by a Cook County grand jury on six counts of felony disorderly conduct pertaining to making four false police reports.[60][56] On June 12, 2020, a judge rejected Smollett's claim that his February charge violated the principle of double jeopardy.[61] His trial began in November 2021, and on December 9 Smollett was found guilty of five of the six counts.[62]

On March 10, 2022, he was sentenced to serve 150 days in county jail, to begin immediately, as well as two and a half years on probation. Smollett was also ordered to make restitution to the city of Chicago of just over $120,000 and fined $25,000.[3] After sentencing Smollett repeatedly said, "I am not suicidal". He then continued, "If I did this, then it means that I stuck my fist in the fears of black Americans in this country for over 400 years and the fears of the LGBTQ community. Your honor, I respect you and I respect the jury, but I did not do this, and I am not suicidal, and if anything happens to me when I go in there, I did not do it to myself, and you must all know that."[63] His lawyers filed a notice of appeal the following day.[64]

On March 16, 2022, an Illinois appeals court ordered, in a 2-1 decision, that Smollett be released from jail, upon his posting of a $150,000 personal recognizance bond, pending the outcome of the appeal of his conviction. The court's ruling explained that if Smollett was not released pending appeal, it would be "unable to dispose of the instant appeal before the defendant would have served his entire sentence of incarceration".[4] Under Illinois state law, Smollett was not required to post cash bond, but agreed to attend future hearings concerning his case as directed by the court. Smollett's attorneys also argued before the court that Smollett's health and safety would be in danger while he was incarcerated, an assertion that prosecutors disputed.[65]

Smollett publicly came out as gay during a televised interview with Ellen DeGeneres in March 2015.[66][67]

In a 2016 interview with Out, he clarified his sexual orientation by stating, "If I had to label myself, I would label myself as a gay man." However, he stated his belief that openness to love is more important than gender, revealing that "If I fall in love down the road with a woman, I'm going to love that woman."[9] When Smollett's gay character from Empire engaged in a tryst with a female character, Smollett defended the plot development by stating that he and Empire's co-creator Lee Daniels were trying to create a conversation about sexual fluidity in the gay community. While he and Smollett are gay, Daniels has stated that they occasionally want to have sex with women. Daniels stated, "We're showing life on Empire," meaning that both he and Smollett were incorporating their own sexual fluidity as gay men into the show.[68]

According to the Los Angeles City Attorney's Office, Smollett pleaded no contest to providing false information to law enforcement in a 2007 misdemeanor case resulting from a DUI stop in which Smollett gave police a false name and signed his brother's name on the summons promising to appear in court.[69][38] Smollett also pleaded no contest to driving with a blood alcohol level over the legal limit and driving without a valid driver's license[69] and was sentenced to a fine and two years of probation.[69]