Jonathan Anh Juzang (/ˈdʒuːzæŋ/; born March 17, 2001) is an American college basketball player for the UCLA Bruins of the Pac-12 Conference. He began his college career playing one season with the Kentucky Wildcats before transferring to UCLA. As a sophomore with the Bruins in 2021, he earned second-team all-conference honors. UCLA advanced to the Final Four of the 2021 NCAA Tournament, and Juzang was named to the All-Tournament Team.

Juzang played high school basketball for Harvard-Westlake School in Los Angeles. In his freshman season, he averaged 16.2 points, 7.5 rebounds, and two assists per game and was teammates with Cassius Stanley. Harvard-Westlake won the CIF Southern Section (CIF-SS) Division 1A championship after Juzang recorded 21 points, 11 rebounds and four assists in the final.[1] As a sophomore, he averaged 22.8 points, 9.5 rebounds and 2.8 assists per game, leading his team to a 22–6 record.[2] In his junior season, Juzang averaged 23 points, 8.5 rebounds and 3.4 assists per game and was named the most valuable player of the Mission League.[3] He helped lead Harvard-Westlake to their first league title since 2011 after scoring 25 points in the championship game against rival Loyola.[4]

After the season, Juzang reclassified from the 2020 class to the 2019 class, allowing him to play collegiately in the following season.[5] He was a four-star recruit and one of the top small forwards in his class.[6][7] On May 10, 2019, he committed to play college basketball for Kentucky over Virginia. He had also been interested in UCLA, but their coach, Steve Alford, was fired, and he did not have time to develop a relationship with their new coach, Mick Cronin, before choosing the Wildcats.[8][9] 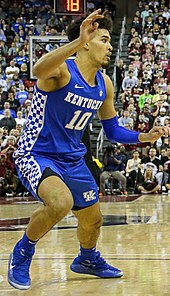 Juzang with Kentucky in 2020

As a freshman at the University of Kentucky, Juzang played behind Tyrese Maxey and Immanuel Quickley and was mostly restricted to catch-and-shoot opportunities in limited playing time.[10][11] On February 8, 2020, he scored a season-high 13 points with three three-pointers in a 77–64 win over Tennessee.[12] He averaged 2.9 points, shooting 37.7 percent from the field, in 12.4 minutes per game for the Wildcats. After the season, he announced that he was transferring from Kentucky.[13] He had been lonely without his family, and the COVID-19 pandemic drove his desire to return home.[9] Juzang decided to transfer to UCLA and play under Cronin,[9] and he was granted a waiver to play immediately instead of the usual requirement to sit out a season.[14][15]

Juzang missed the first four games of the 2020–21 season with a stress reaction in his right foot.[16][17] In his first game, he scored 10 points off the bench in a win over San Diego.[18] He moved into the starting lineup in the following game against Marquette.[19] On January 14, 2021, Juzang scored a then-career-high 17 points, leading the Bruins in scoring in a 91–61 blowout win over Washington State.[20] On January 24, against Stanford, he scored 27 in a 73–72 loss in overtime,[21] the Bruins' first conference defeat of the season. The game included a stretch where Juzang scored 21 straight points for the team, making eight consecutive shots to end the first half and begin the second.[22] Against Washington, he scored a career-high 32 points in a 64–61 win.[23] He was the first Bruin to score at least half of his team's points in a game since Reggie Miller 35 years earlier.[24] The team's leading scorer, Juzang was a second-team All-Pac-12 selection.[25]

In the 2021 NCAA Tournament, Juzang joined Miller and Lew Alcindor (known now as Kareem Abdul-Jabbar) to become the third player in UCLA history to score at least 20 points in their first two NCAA Tournament games.[26] He scored 28 points in a 51–49 win over No. 1 seed Michigan, as UCLA advanced to their first Final Four since 2008. Eighteen of his points came in the first half, which included a run where he scored 12 consecutive for the Bruins.[27] He became the first player to score at least half of his team's points in a regional finals win since Oscar Robertson in 1960.[28] He was named the most outstanding player of the tournament's East Region.[29] Juzang scored 29 points in the national semifinal against 1-seed Gonzaga, including a basket to tie the game with 3.3 seconds remaining in overtime, but the Bulldogs' Jalen Suggs made a 40-foot (12 m) buzzer beater to win 93–90 over the Bruins.[30] Named to the 2021 All-Tournament Team,[31] Juzang scored 137 total points in the tournament, the second most by a UCLA player in NCAA Tournament history behind Gail Goodrich's 140 points in 1965.[32] He scored 20 or more points four times in the tournament for a total of eight during the season.[33]

On April 20, 2021, Juzang announced that he would declare for the 2021 NBA draft while maintaining his college eligibility.[34]

Juzang's older brother, Christian, played college basketball as a point guard for Harvard,[36] and he became a player in the Vietnam Basketball Association.[37] His father, Maxie, is Creole, and his mother, Hanh, is Vietnamese. He has a younger sister, Lauren.[8]