Joseph Allen Maldonado-Passage (né Schreibvogel; born March 5, 1963), better known by his stage name Joe Exotic, is an American former zoo operator, showman, internet personality, musician, and convicted felon. The former owner and operator of the Greater Wynnewood Exotic Animal Park (a.k.a. G. W. Zoo) in Wynnewood, Oklahoma, Maldonado-Passage had claimed to be the most prolific breeder of tigers in the United States.[1] Before working with animals he was a police officer—briefly serving as the chief of police in Eastvale, Texas.[2][3] He twice unsuccessfully ran for public office, first for President of the United States in 2016 as an independent, and then for Governor of Oklahoma in 2018 as a Libertarian.

In 2019, Maldonado-Passage was convicted on 17 federal charges of animal abuse (eight violations of the Lacey Act and nine of the Endangered Species Act)[4] and two counts of murder for hire, for a plot to kill Big Cat Rescue CEO Carole Baskin.[4] He is serving a 22-year sentence in federal prison. In 2020, Netflix released an eight-part documentary, Tiger King: Murder, Mayhem and Madness, focused on Maldonado-Passage, his zoo, and his feud with Baskin.

Maldonado-Passage was born Joseph Allen Schreibvogel in Garden City, Kansas, on March 5, 1963.[5][citation needed] He grew up on a working farm in Kansas. When he was five years old, he was raped by an older boy.[1] He and his family moved to Texas where he joined the Eastvale, Texas, police department, soon becoming chief of the small department. He has said that after being outed to his parents as gay by one of his siblings, he attempted suicide by crashing his police cruiser into a bridge.[2] His claims about the wreck have changed over time; in 1997, he told The Dallas Morning News that someone forced the car off the bridge during a police drug investigation. Local residents that were contacted had no recollection of the event.[3]

Schreibvogel worked at various jobs before opening a pet store with his brother Garold in Arlington, Texas, in 1986.[2] In 1997, after closing the first pet store and opening a new one nearby, Schreibvogel came into conflict with Arlington officials over repeated code violations for decorations and signs; he had been hanging gay pride symbols such as a United States flag with rainbow stripes in the store windows, and he accused city inspectors of homophobia and of targeting the business because of his sexual orientation.[3] After his brother's death in a car accident in 1997, Schreibvogel sold the pet store and purchased a 16-acre (6.5 ha) Oklahoma farm with his parents.[2][3] Two years after his brother's death, the farm opened as Garold Wayne Exotic Animal Memorial Park as a dedication to his brother.[2][6] Two of Garold's pets were the zoo's first inhabitants.[2]

In February 1999, animal-welfare investigators discovered a large number of neglected emus in Red Oak, Texas, and Schreibvogel volunteered to capture the animals and take them to his animal park. However, Schreibvogel, local volunteers, and Red Oak police were quickly overwhelmed by the task of corralling the large and fast-running birds, several of which died. Schreibvogel and another man resorted to killing emus with shotguns and were accused of animal cruelty by police. However, since the emus were considered livestock, they could lawfully be killed humanely in Texas, and a grand jury declined to indict Schreibvogel. Most surviving birds ultimately wound up at Texas ranches.[3]

In 2000, Schreibvogel acquired his first tigers (two abandoned tigers).[2] To feed his growing zoo of big cats, he took in horses that were donated to him. He would shoot the horses and feed them whole to the tigers, lions, and other big cats.[1]

For over 20 years, he was known as Joe Exotic, the owner and operator of the Greater Wynnewood Exotic Animal Park (a.k.a. G. W. Zoo), known for its big cats. He operated an online reality television show that he streamed from his zoo. Over the years, he operated sideshows around the country where he allowed people to pet tiger cubs. He also staged shows at fairs and in shopping malls.[7]

In 2006, the G. W. Zoo was cited multiple times by the USDA for violations of Animal Welfare Act standards.[8] In 2011, Carole Baskin, founder of Big Cat Rescue sanctuary in Florida, organized protests against his use of cubs in his shows. To retaliate, Maldonado-Passage used the Big Cat Rescue name and various identifying aspects of the sanctuary's branding in his own marketing. Baskin sued Maldonado-Passage for trademark infringement and eventually was ruled to be entitled to a $1 million in settlement compensation from him, although she was never able to collect most of it.[7]

Maldonado-Passage was an aspiring country singer. Under the pretense of obtaining music for a planned reality television series, he commissioned country songs from other artists, with his creative contributions reportedly being limited to suggesting song topics and singing some backing vocals. He then produced music videos for the songs and posted them on YouTube, depicting himself as the main performer and taking full credit for the music, allegedly without having notified the actual artists.[9] In 2015, he released a video for the song "Here Kitty Kitty", a diss track against Carole Baskin. In the video, he had a Baskin look-alike feeding her second husband, Don Lewis, to the tigers. Lewis has been missing since 1997,[10] and was declared dead in 2002.[11]

Maldonado-Passage ran as "Joseph Allen Maldonado" as an independent candidate in the 2016 election for President of the United States, attained ballot access in Colorado, and received 962 votes (including recorded write-ins) nationwide.[12] 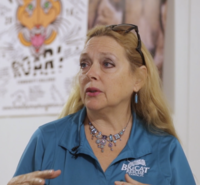 Carole Baskin in 2019, the target of Maldonado-Passage's murder-for-hire plot.

Maldonado-Passage was indicted for attempting to hire someone to murder Big Cat Rescue CEO Carole Baskin.[16] He had tried to hire an undercover FBI agent who was posing as a hitman. On September 7, 2018, he was arrested[17] in Gulf Breeze, Florida, and held at the Santa Rosa County Jail until September 19 when he was transferred to federal detention. He was later transferred to Grady County Jail in Chickasha, Oklahoma.[18]

On April 2, 2019, Maldonado-Passage was convicted on two counts of murder for hire, eight violations of the Lacey Act, and nine violations of the Endangered Species Act.[14][4] On January 22, 2020, he was sentenced to 22 years in federal prison.[19] As of March 2020, he is incarcerated at FMC Fort Worth.[20] That same month, Maldonado-Passage began seeking a presidential pardon from President Donald Trump.[21]

Joe Exotic is openly gay. He has referred to numerous partners as his husbands despite not being legally married.[22] His first known partner was Brian Rhyne, who died of complications from HIV in 2001.[1] The following year, he started a relationship with J. C. Hartpence, an event manager who aided Joe Exotic with his traveling animal show. In mid-2003, John Finlay was hired as an employee of the G. W. Zoo, and within a month, had begun a relationship with Schreibvogel. By this point, the relationship between Joe Exotic and Hartpence had deteriorated, due to drug and alcohol addiction. It finally ended after Joe Exotic threatened to kill Hartpence and feed his remains to the zoo's largest tiger, and when Hartpence woke Schreibvogel up by putting a gun to his head, leading to his arrest by the local authorities. Hartpence was later convicted for child molestation and first-degree murder.[2]

Travis Maldonado arrived at the zoo in December 2013, and just like Finlay, rapidly began a relationship with Schreibvogel.[2] Schreibvogel, Maldonado and Finlay were unofficially married to each other less than a month later in a three-partner wedding ceremony January 2014.[2] Joe Exotic and Finlay eventually fell out, and following an incident in the zoo's back parking lot, Finlay was arrested and charged with assault and battery. In 2015, Joe Exotic legally wed Travis Maldonado, and his legal name became Joseph Maldonado.[2] As revealed in Tiger King: Murder, Mayhem and Madness, both John Finlay and Travis Maldonado were heterosexual, and both had affairs; John Finlay had impregnated the zoo's receptionist, which was one of the reasons leading to his departure, and Travis Maldonado was regularly having sex with multiple women on the grounds of the zoo. On October 6, 2017, Travis Maldonado died in an accident involving a firearm,[23] which occurred at the zoo, in front of Joe Exotic's campaign manager.[24] On December 11, 2017, Joe Exotic married Dillon Passage; one of the witnesses was Travis Maldonado's mother.[23][2][25] Upon his marriage to Passage, Joe Exotic's legal surname became Maldonado-Passage.

The 2020 documentary series Tiger King: Murder, Mayhem and Madness is centered on Maldonado-Passage.[26][27] He had previously appeared in the Louis Theroux documentary America's Most Dangerous Pets.[28]

On March 17, 2020, Maldonado-Passage filed a lawsuit against the United States federal government at the Grady County Jail. In the lawsuit, he asks for $94 million from the United States Fish and Wildlife Service (USFWS). He is also seeking a presidential pardon from Donald Trump, and plans to represent himself in the lawsuit.[29] The lawsuit specifies damages by the USFWS of $79 million for the loss of his tigers. He also demands $15 million for false imprisonment and a litany of other charges including the death of his mother, Shirley. The lawsuit also accuses his former business partner, Jeff Lowe, of switching his medicine with illegal drugs and ruining his property.[30][31]