James Arthur Boeheim (/ˈbeɪhaɪm/ BAY-hyme; born November 17, 1944) is an American college basketball coach who is the head coach of the Syracuse Orange men's team of the Atlantic Coast Conference (ACC).[1][2][3] Boeheim has guided the Orange to ten Big East regular season championships, five Big East Tournament championships, and 34 NCAA Tournament appearances, including five Final Four appearances and three appearances in the national title game. In those games, the Orange lost to Indiana in 1987 on a last-second jump shot by Keith Smart, and to Kentucky in 1996, before defeating Kansas in 2003 with All-American Carmelo Anthony.

Boeheim announced in 2015 that he would retire in March 2018.[14] However, following the departure of his long-time assistant coach and expected successor Mike Hopkins, Boeheim extended his contract with Syracuse beyond 2017 for an unknown period.[15]

After suffering from cancer in 2001, Boeheim and his wife founded the Jim and Juli Boeheim Foundation, which is devoted to child welfare, cancer treatment, and prevention.[16]

Boeheim was born in 1944 in Lyons, New York, a small town about 57 miles west of Syracuse. He graduated from Lyons Central High School.

Boeheim enrolled in Syracuse University as a student in 1962, and graduated with a bachelor's degree in social science.[1] During his freshman year, Boeheim was a walk-on with the freshman basketball team. By his senior year, he was the varsity team captain and a teammate of All-American Dave Bing, his freshman roommate. The pair led coach Fred Lewis's Orangemen[a] to a 22–6 overall win-loss record that earned the team's second-ever NCAA Tournament berth. While at Syracuse, he joined the Delta Upsilon fraternity.

After graduating from Syracuse, Boeheim played professionally with the Scranton Miners of the Eastern Professional Basketball League, during which he won two championships[2] and was a second-team all-star (SU Athletics).

In 1969, Boeheim decided to coach basketball and was hired as a graduate assistant at Syracuse under Roy Danforth. Soon thereafter he was promoted to a full-time assistant coach and was a member of the coaching staff that helped guide the Orangemen to the 1975 NCAA Tournament, where Syracuse University made its first Final Four appearance.

In 1976, Danforth left to become the head basketball coach and athletic director at Tulane University. A coaching search then led to nought, and Boeheim was promoted to head coach. Apart from his brief stint in the pros, Boeheim has spent his entire adult life at Syracuse, as either a student, player, assistant coach or head coach, a rarity in modern-day major collegiate athletics. In 2018, CBSSports.com writer Matt Norlander emphasized this in a piece where he speculated on potential successors for Boeheim, stating:

Boeheim does not have a parallel in major college athletics. There has never been a Division I coach in men's basketball, women's basketball or football who has spent more than 40 years at their alma mater and never coached anywhere else. Boeheim's the only one. There is no coaching figure more synonymous and literally affiliated with only one school.[17]

Norlander also noted that Boeheim entered the 2018–19 season with nearly as many wins on his official coaching record, and more when counting wins vacated by the NCAA, than all other permanent Syracuse head coaches combined, and in his various roles at Syracuse had been involved in over half of all men's basketball games in school history.[17]

In 1986, Boeheim was offered the head coaching job at Ohio State but turned it down to stay at Syracuse.[18]

During a Syracuse–Georgetown game in the early 1980s, Hoyas star Patrick Ewing was nearly struck by an orange, and at times had endured racial taunts from the SU student section. Boeheim borrowed a microphone and threatened to forfeit the game if fans continued to throw objects at Ewing.[19]

In 42 years as head coach at Syracuse, Boeheim has guided the Orange to postseason berths, either in the NCAA or NIT tournaments, in every year in which the Orange have been eligible. The only times Syracuse missed the postseason were in 1993 when NCAA sanctions barred them from postseason play despite a 20–9 record[20][21] and in 2015 when Syracuse University self-imposed a one-year postseason ban related to the 2015 NCAA sanctions against the university's sports programs.[22][23] During his tenure, the Orange have never had a losing season, have appeared in three NCAA national championship games (1987, 1996, and 2003) and won the national title in 2003.

Boeheim has been named Big East coach of the year four times, and has been named as District II Coach of the Year by the National Association of Basketball Coaches ten times. In 2004, Boeheim received two additional awards. The first was during the spring when he was awarded the Clair Bee Award in recognition of his contributions to the sport of basketball. During the fall of the same year Boeheim was presented with Syracuse University's Arents Award, the university's highest alumni honor.

Boeheim's coaching style at Syracuse is unusual in that, whereas many highly successful coaches prefer the man-to-man defense, he demonstrates a preference for the match-up 2–3 zone.[2][24] 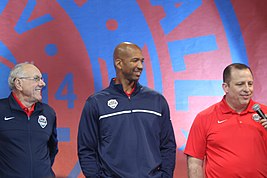 In an exhibition game on November 7, 2005, against Division II school Saint Rose from Albany, New York, Boeheim was ejected for the first time in his career after arguing a call late in the first half in the Orange's 86–73 victory. He was also ejected from Cameron Indoor Stadium on February 22, 2014, against Duke after arguing a player control foul call.[25][26]

Boeheim has also been a coach for USA national teams. In 2001, during his seventh year as a USA basketball coach, Boeheim helped lead the Young Men's Team to a gold medal at the World Championship in Japan. During the fall of that year, he was named USA Basketball 2001 National Coach of the Year. He was an assistant coach under Mike Krzyzewski for the US national team in the 1990 FIBA World Championship and 2006 FIBA World Championship, winning the bronze medal both times.[4][5] He returned as an assistant coach under Mike Krzyzewski for the 2008 Summer Olympics in Beijing, China, and again at the 2012 Summer Olympics in London, England, where the United States won the gold medal both times.

In the 2012–13 season, Boeheim led Syracuse to its first Final Four appearance since its 2003 NCAA National Championship. The Orange lost 61–56 to Michigan.

In the 2013–14 season, he led the Orange to the NCAA Tournament and lost in the third-round game to the Dayton Flyers.

After Syracuse sat out the 2015 tournament via a self-imposed postseason ban, Boeheim again led Syracuse to a surprise Final Four berth in the 2015–16 season.[27] This included a 15-point comeback versus the No. 1 seeded Virginia Cavaliers.[28] The team lost to North Carolina 83–66.

The following season Syracuse started ranked 19th in the AP Poll, but failed to make the NCAA tournament.[29] In the 2017–18 season Syracuse would return to the NCAA tournament despite going 8–10 in conference play. In the tournament Syracuse upset 4-seeded Michigan State before losing to Duke in the Sweet 16.[30] The next year saw the Orange make back-to-back NCAA tournament appearances for the first time since the 2013–14 season. On January 14, 2019, Syracuse upset Duke in Cameron Indoor Stadium, marking the first time that the Blue Devils had lost to an unranked team at home. They would lose to Baylor in the opening round of the NCAA tournament. Syracuse started the 2019–20 season slow, losing 48–34 to Virginia, the lowest amount ever scored by a team in Boeheim's career.[31] SU would win its final game of the season in the ACC Tournament beating North Carolina 81–53 and defeating the Tar Heels for the first time since 2014. This would be the last game played due to COVID-19/[32] In the 2020–21 season SU would once again upset its way to the Sweet 16 beating 3-seeded West Virginia before losing to eventual Final Four participant Houston.

The Syracuse basketball program has been investigated for major NCAA violations on two occasions during Boeheim's tenure.[33][34]

On March 6, 2015, the NCAA suspended Boeheim for the first nine games of 2015–16 ACC conference play and took away 12 scholarships over a four-year period, as a result of a multi-year investigation into the university's athletic programs. The program was forced to vacate a total of 101 wins from the 2004–2005, 2005–2006, 2006–2007, 2010–2011, and 2011–2012 seasons, which included any game during those years where one or more players deemed to have been ineligible played. This constitutes the third-most wins ever permanently vacated by one program, behind the 113 wins vacated by Michigan and 123 wins by Louisville.[35] Ten of the vacated wins were NCAA Tournament games.[36] However, the NCAA confirmed that sanctions did not include the removal of any trophies or banners. Therefore, Syracuse displays banners for all of its NCAA appearances and conference titles from those years.[37]

After two appeals, Boeheim's nine-game suspension was upheld, though he was permitted to begin the suspension prior to ACC conference play as dictated in the original penalty. Additionally, the permanent vacation and erasure of 101 wins was upheld.[38][39] However, the number of scholarships lost by Syracuse was reduced to 8 over a four-year period, down from 12 over the same period.[38] 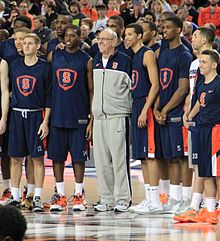 Boeheim with his team at the 2013 NCAA Tournament

† - From 1975 to 1982, the Eastern College Athletic Conference (ECAC) organized annual regional end-of-season men's basketball tournaments for independent Division I ECAC member colleges and universities in the Northeastern United States. The winner of each regional tournament was declared the ECAC regional champion for the season and received an automatic bid in the NCAA Men's Division I Basketball Tournament.

*** Boeheim's official NCAA record excludes the aforementioned 101 vacated wins as well as the games during his nine-game suspension in 2015–2016, however Syracuse claims all of its NCAA appearances and conference titles from those years.[37]

Boeheim's notable accomplishments during his career include:

These former assistant coaches or players of Boeheim later became head coaches at the collegiate level or higher.

Boeheim appeared in the movie Blue Chips, with Nick Nolte and Shaquille O'Neal, playing himself. Boeheim also appeared in the Spike Lee movie He Got Game, again playing himself. Boeheim has appeared in numerous commercials throughout Central New York and also had a spot in a nationwide Nike Jordan ad featuring former Syracuse great Carmelo Anthony. Boeheim likes to listen to the music of Bruce Springsteen. In an interview, he said that he had no interest in pursuing any other career other than coaching Little League after he retires from coaching basketball.

Boeheim had prostate cancer in 2001 and subsequently became a major fund-raiser for Coaches vs. Cancer, a non-profit collaboration between the NABC and the American Cancer Society, through which he has helped raise more than US$4.5 million for ACS's Central New York chapter since 2000.[51][52][53] In 2009, Boeheim and his wife, Juli, founded the Jim and Juli Boeheim Foundation to expand their charitable mission to organizations around Central New York concerned with child welfare, as well as cancer treatment and prevention.[54]

Boeheim married his wife Juli in 1997,[1][55] and they have three children together: Jimmy and twins, Buddy and Jamie. Boeheim also has a daughter, Elizabeth, with former wife Elaine.[1] His son Jimmy played forward for Cornell from 2017 to 2020, but did not get to play what would have been his senior season at Cornell because the Ivy League canceled its 2020–21 season due to COVID-19. He entered the NCAA transfer portal in the fall of 2020, and announced on April 16, 2021, that he would join his father and brother at Syracuse for his final college season in 2021–22, by which time he will have graduated from Cornell.[56] Jamie is a forward for the University of Rochester, and Buddy is a guard, playing for his father at Syracuse.[55][57][58][59]

Around 11:22 p.m. on February 20, 2019, Boeheim was driving his car on Interstate 690 in Syracuse when he struck and killed a 51-year-old man who was standing near the side of the road.[60] The accident was reportedly a result of a disabled car being in the middle of the road in bad weather. When Boeheim maneuvered around the other car, he struck the man, who had been a passenger in the disabled car. Field, speed, and sobriety tests were administered by police. It was additionally found that the disabled vehicle did not have lights on and had non-operational rear marker lights, and that the passengers of the disabled car, including the man who was struck and killed, were wearing dark clothing. Boeheim was cleared of any wrongdoing in the incident.[61][62][63]