In music, McCurdy independently released her debut single "So Close" in 2009.[4] She released her debut extended play, Not That Far Away, in 2010. Her eponymous second extended play was released in 2012, followed by her eponymous debut studio album later that year. Its lead single "Generation Love" debuted at number 57 on the Billboard Hot Country Songs chart and peaked at number 44.[5]

In 2017, she quit acting and decided to pursue a career in writing and directing. From February to March 2020, I'm Glad My Mom Died, her tragicomedy one-woman show, was performed in theaters in Los Angeles and New York City; plans for further dates were postponed and ultimately canceled due to the onset of the COVID-19 pandemic. In 2020, she began hosting an interview podcast, Empty Inside.[6][7] In 2022, she released a memoir, I'm Glad My Mom Died, describing her career as a child star and the abusive behavior of her mother, who died in 2013.[8]

McCurdy was raised in Garden Grove, California, in a relatively poor Mormon family, though she ultimately left the religion in her early adulthood.[9] Her mother, Debra McCurdy, home-schooled her and her three older brothers.[10][11] Her father, Mark McCurdy, worked two jobs.[12] After her mother's death, McCurdy learned that he was not her biological father.[12]

In 2000, at the age of eight, McCurdy started her acting career on Mad TV.[13] She then appeared in several television series, including CSI: Crime Scene Investigation, Malcolm in the Middle, Lincoln Heights, Will & Grace, Zoey 101, True Jackson, VP, Law and Order SVU, Medium, Judging Amy, The Inside, Karen Sisco, Over There, and Close to Home. In 2003, she acted in the film Hollywood Homicide. In 2005, she was nominated for a Young Artist Award for "Best Performance in a Television Series – Guest Starring Young Actress" for her performance in Strong Medicine.[14] She also appeared in a commercial for Sprint.[15] 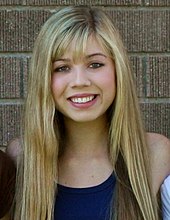 From 2007-2012, she starred as Sam Puckett in the Nickelodeon TV series iCarly. In 2008, she was nominated for a Young Artist Award for her work on iCarly and her performance as Dory Sorenson in the TV movie The Last Day of Summer. She was nominated for a 2009 Teen Choice Award in the Favorite TV Sidekick category for her work on iCarly. She played Bertha in Fred: The Movie, a movie based on a YouTube series about Fred Figglehorn.

In June 2008, McCurdy announced that she was working on her debut album. The first single, "So Close", was released on March 10, 2009.[16] On May 19, her cover of the Amanda Stott song "Homeless Heart" was released.[17][18] The song was released in honor of McCurdy's recently deceased friend Cody Waters, who died at the age of nine from brain cancer, and 20% of the proceeds were donated to the Cody Waters Foundation.[19] She met Waters through St. Jude Children's Research Hospital. In mid-2009, McCurdy signed with country music label Capitol Records Nashville.[20] On April 16, 2010, samples of selected songs from McCurdy's upcoming debut country album were released online. The song clips were released for fans to vote for which one they believed should be McCurdy's first radio single.[21] "Not That Far Away" received the most votes, and was released to country radio on May 24, 2010, and iTunes on June 1.

McCurdy at the Joint Base McGuire-Dix-Lakehurst in 2012

McCurdy starred alongside Ariana Grande in the Nickelodeon series Sam & Cat, reprising her role as Sam Puckett, with Grande reprising her role as Cat Valentine. The series' plot centers on the girls becoming roommates and starting their own babysitting business. It premiered on June 8, 2013. In 2014, McCurdy was absent from the Nickelodeon Kids' Choice Awards. Explaining her absence, McCurdy stated that Nickelodeon put her in an "uncomfortable, compromising, unfair situation" where she had to look out for herself, and McCurdy and Grande were having disagreements with the network over their respective salaries, and that McCurdy accused Nickelodeon of paying Grande more money.[27] The network placed Sam & Cat into hiatus. The network initially stated that the hiatus was planned and that the series was not cancelled.[28] On July 13, 2014, Nickelodeon announced that, after only one season, Sam & Cat was cancelled.[29][30][31] In an interview on Entertainment Pop, McCurdy mentioned that she later made up with Grande.[31][32] In McCurdy's 2022 memoir I'm Glad My Mom Died she describes incidents at the network, such as when she was illicitly photographed in a bikini at a wardrobe fitting, and being encouraged to drink alcohol while underage by a person she identified as "the Creator". She stated that after the cancelation of 'Sam & Cat', Nickelodeon later offered her $300,000 to agree not to discuss her experiences at the network, which she turned down.[8][33]

On August 13, 2014, McCurdy launched the online show What's Next for Sarah?. She served as the star of the series as well as the writer of the show, along with duties as executive producer and editor. She says that the show is based loosely on her life and that the character she plays, Sarah Bronson, is based on her.[34][35][36][37] In 2015, she began starring in the Netflix drama series Between.[38][39] It was also announced that she would star in teen comedy Little Bitches alongside Virginia Gardner and Kiersey Clemons.[40]

In August 2016, McCurdy signed a deal with digital production company Canvas Media Studios to develop projects and further utilize her social media connections with fans.[41] She also starred as Claire in the psychological thriller film Pet.[42]

Between was not renewed for a third season, and while critics acknowledged McCurdy as "one of the few cast members who can act",[43] she expressed on her website that she felt ashamed of 90% of her résumé.[44] She eventually decided to quit acting and to pursue writing and directing in 2017:[45]

In 2018, McCurdy wrote and directed her first short film, Kenny, a dramedy[46] inspired by the death of her mother; the film also featured an all-female crew. Kenny was featured in The Hollywood Reporter and on Short of the Week. She has since released three more short films, which she also wrote and directed: The Grave; The McCurdys, a semi-autobiographical short based on her childhood;[47] and Strong Independent Women, a short that deals with eating disorders.[48] In late 2018, she announced that she hopes to direct more films.[49]

In 2011, McCurdy began writing a series of articles for The Wall Street Journal. She has written eight pieces for the paper, on topics ranging from Shirley Temple[50] to body shaming and a corporate culture that she perceives as smoke and mirrors.[51] She has also written for Seventeen magazine[52][53] and The Huffington Post.[54]

McCurdy composed an article titled "Off-Camera, My Mom's Fight With Cancer", which was published in The Wall Street Journal in June 2011. It describes in detail her mother Debra's ongoing battle with cancer and how her family coped with the situation. The article also features advice from McCurdy on living with an ill parent.[55] On September 20, 2013, her mother died, after being first diagnosed with cancer 17 years earlier.[56]

In 2020, McCurdy created and starred in a one-woman tragicomedy show, I'm Glad My Mom Died, in various theaters in Los Angeles and New York. She later had to set her show into hiatus after the onset of the COVID-19 pandemic in the United States. For the first time since she opened up publicly about her eating disorder in 2019, she posted a new video on YouTube where she sings about her personal implications by finding herself in quarantine due to the outbreak.[57] In July 2020, McCurdy posted a video on her YouTube channel and social media where she sings about starting a podcast called Empty Inside.[58] She revealed on the podcast, during an interview with actress Anna Faris, that she had retired from professional acting. McCurdy stated she had been pushed into acting as a child by her mother, and soon became her family's primary source of income. She became "ashamed" of the roles she had played in the past, and after seeking therapy in the late 2010s, quit acting.[7] When iCarly was revived that same year for Paramount+, McCurdy declined to reprise her role of Sam Puckett.[59] In September 2021, McCurdy resumed performing her tragicomedy show in Los Angeles.[60]

She has described the close relationship she had with her abusive mother as "the heartbeat of my life."[8] When McCurdy was two to three years old, her mother was diagnosed with breast cancer and underwent several surgeries, chemotherapy, and a bone marrow transplant.[62][63] In 2010, her mother's cancer recurred, and in 2013, she died; McCurdy was 21 years old.[64]

McCurdy has revealed that she was emotionally and sexually abused by her mother. In an interview with People magazine, she said, "My mom's emotions were so erratic that it was like walking a tightrope every day." According to McCurdy, her mother pushed her into acting when she was six years old to both financially support her family, and because her mother had wanted to become a performer herself. She stated that her mother was "obsessed with making [her] a star" and detailed how her mother contributed to her eating disorder by introducing her to calorie restriction at age 11. She also revealed that until she was 16 or 17 years old, her mother performed vaginal and breast exams, ostensibly as a cancer screening, and never let her shower alone. McCurdy said that she refused to appear in the revival of iCarly because of the reminder of her mother's abuse on the original show, and that her appearance on Sam & Cat was done to please her mother.[65][62][66][67] McCurdy stated in an interview that she did not receive all of her payment from acting as a minor, because her Coogan account was not properly filed.[68][better source needed]

In her 2022 memoir I'm Glad My Mom Died – the cover of which features McCurdy looking up and holding a pink urn with confetti spilling out[69] – McCurdy further described her mother's abusive and controlling influence.[8]

In March 2019, McCurdy publicly revealed in a Huffington Post article that, from age 11, she had anorexia, and later bulimia.[70] In the article, McCurdy describes her mother's and the entertainment industry's aiding of disordered eating, seeking help after her sister-in-law noticed the disorder, and various health scares, such as losing a tooth from regurgitating stomach fluids that wore down her tooth enamel and passing out on Miranda Cosgrove's bathroom floor from dehydration.[70][71]

In addition to her struggles with eating disorders, McCurdy is a recovering alcoholic, having begun drinking heavily shortly before her mother's death.[72]

McCurdy, c. 2009, wearing the signature attire of Sam Puckett, her character in iCarly