Jeffrey Ross Toobin[1] (/ˈtuːbɪn/; born May 21, 1960) is an American lawyer, author, blogger, and legal analyst for CNN.[2] During the Iran–Contra affair, he served as an associate counsel in the Department of Justice. He moved from government into writing during the 1990s, and wrote for The New Yorker from 1993 to 2020. Toobin has written several books, including an account of the O. J. Simpson murder case. That book was adapted as a TV series, The People v. O. J. Simpson: American Crime Story, which aired in 2016 as the first season of FX American Crime Story; it won nine Emmy Awards.[3]

Toobin was born to a Jewish family[4] in New York City in 1960,[5] a son of Marlene Sanders, former ABC News and CBS News correspondent, and Jerome Toobin, a news broadcasting producer.[6] His younger brother, Mark, born in 1967 with Down syndrome, lived apart from the family.[7] 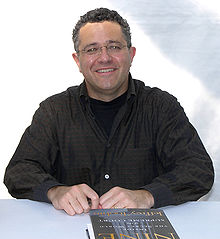 Toobin promoting his book The Nine: Inside the Secret World of the Supreme Court at the 2007 Texas Book Festival

Toobin began freelancing for The New Republic while a law student. After passing the bar, he worked as a law clerk to a federal judge and then as an associate counsel for Independent Counsel Lawrence Walsh during the Iran–Contra affair and Oliver North's criminal trial. He next served as an Assistant United States Attorney for the Eastern District of New York in Brooklyn.[10]

Toobin wrote a book, Opening Arguments: A Young Lawyer's First Case: United States v. Oliver North,[11] about his work in the Office of Independent Counsel, to which Walsh objected. Toobin went to court to affirm his right to publish. Judge John F. Keenan of the United States District Court for the Southern District of New York wrote an opinion that Toobin and his publisher had the right to release this book. Before Walsh's appeal could be decided, the book was published, mooting the case. Accordingly the Circuit Court vacated the lower court's decision and ordered that the case be dismissed.[12]

After three years as an Assistant U.S. Attorney, Toobin resigned from the U.S. Attorney's office in Brooklyn, where he had gone to work after working for Walsh, and abandoned "the practice of law."[citation needed] He started working in 1993 at The New Yorker and became a television legal analyst for ABC in 1996.

Toobin joined CNN in 2002;[13] he is now the chief legal analyst. In 2003, he secured the first interview with Martha Stewart about the insider trading charges against her.[2]

Toobin speaking about the Supreme Court at the John J. Rhodes Lecture in Tempe, Arizona

Toobin is the author of seven books. His book The Nine: Inside the Secret World of the Supreme Court (2007) received awards from the Columbia University Graduate School of Journalism and the Nieman Foundation for Journalism at Harvard University.[13]

His next book, The Oath: The Obama White House and the Supreme Court, was published in 2012. American Heiress: The Kidnapping, Crimes and Trial of Patty Hearst came out in 2016. All were New York Times Best Sellers. In 2020, he authored True Crimes and Misdemeanors, the Investigation of Donald Trump, which is described as a condensation of evidence against the character and presidency of Donald Trump as if he were on trial.[15]

On October 19, 2020, Toobin was suspended from The New Yorker after a Zoom video call between New Yorker and WNYC radio staffers.[16] The New York Times reported that according to Masha Gessen, one of the call participants, "he was seen lowering and raising his computer camera, exposing and touching his penis, and motioning an air kiss to someone other than his colleagues."[7] CNN said Toobin "has asked for some time off while he deals with a personal issue, which we have granted." Toobin contended the incident was unintentional and said in a statement: "I made an embarrassingly stupid mistake, believing I was off-camera. I apologize to my wife, family, friends and co-workers."[17] The next month, he was fired from The New Yorker following an internal investigation by the parent organization, Condé Nast.[18] New York Public Radio, which owns WNYC, indefinitely banned Toobin from its broadcasts and podcasts.[7]

Toobin was widely ridiculed in the wake of the incident by, among others, Jimmy Fallon, Donald Trump Jr., and Saturday Night Live.[19] Defenders included former New Yorker editor Tina Brown, who said that "27 years of superb reporting and commitment to The New Yorker should have been weighed against an incident that horribly embarrassed the magazine but mostly embarrassed himself." Author and journalist Malcolm Gladwell said he "read the Condé Nast news release, and I was puzzled because I couldn’t find any intellectual justification for what they were doing."[7]

On June 10, 2021, Toobin returned to CNN as their chief legal analyst. He described his conduct as, "deeply moronic and indefensible" and he said "I didn't think other people could see me," but admitted that this was no defense for his behavior. He said the time he spent off-air "trying to be a better person", working on his upcoming book about the Oklahoma City bombing, doing therapy, and working at a food bank.[20]

In 1986, Toobin married Amy Bennett McIntosh, whom he met in college while they worked at The Harvard Crimson. She is a 1980 Harvard graduate, holds an MBA degree from Harvard Business School,[1][8] and has held executive positions at Verizon Communications and Zagat Survey.[21] They have two adult children, a daughter and son.[21]

Toobin had a longtime off-and-on extramarital affair with attorney Casey Greenfield,[22] who is the daughter of American television journalist and author Jeff Greenfield and the ex-wife of screenwriter Matt Manfredi.[23] They had a child in 2009, which Toobin initially resisted acknowledging.[21][24] Ultimately, Toobin's paternity was confirmed with a DNA test and a Manhattan Family Court judge ordered Toobin to pay child support.[22]