Jeanie Marie Buss (born September 26, 1961)[1] is an American sports executive who is the controlling owner and president of the Los Angeles Lakers of the National Basketball Association (NBA).[2][3] Buss is a daughter of Jerry Buss, a real estate investor who later owned the Lakers and other sports businesses. At age 19, she started in the family business as general manager of the Los Angeles Strings professional tennis team. Buss later became the owner of the Los Angeles Blades professional roller hockey team. She was also president of the Great Western Forum before becoming vice president of the Lakers. After Buss's father died in 2013, his controlling ownership of the Lakers passed to his six children via a family trust, with each sibling receiving an equal vote. Buss took over as team president and represents the Lakers on the NBA Board of Governors. In 2020, she became the first female controlling owner to guide her team to an NBA championship.[4]

Born in Santa Monica, California,[1] Buss was the third of four children to Joann and Jerry Buss, and one of two daughters; she grew up with older brothers Johnny and Jim and younger sister Janie. Their parents divorced in 1972, leaving Buss feeling emotionally abandoned.[5] At age 14, Buss attended World Team Tennis meetings with her dad, who owned the Los Angeles Strings. When she was 17, she moved in with her dad at Pickfair. She became so familiar with the estate that she led guided tours. Buss attended college at the University of Southern California (USC), where she majored in business and graduated with honors.[5][6]

World TeamTennis folded in 1978, and was revived in 1981 as TeamTennis. Jerry once again owned the second incarnation of the Strings, and he appointed the 19-year-old Buss as the general manager while she was studying at USC.[5][7] "Basically, my dad bought me the team," said Buss.[5] After the Strings folded in 1993, Buss brought professional roller hockey to Los Angeles as owner of the Los Angeles Blades in Roller Hockey International. The league named her Executive of the Year.[5][6] Buss also served four years as president of the Great Western Forum, then the home arena of the Lakers.[6] Throughout her stint with the Forum, her role with the Lakers increased, and she served as the Alternate Governor on the NBA Board of Governors since 1995.[6] In 1999, she was named executive vice president of business operations for the Lakers.[8] Her brother Jim was promoted to vice president of player personnel in 2005.[9] Their father's plan was to have Buss handle the business decisions of the team, while Jim handled the basketball side of the Lakers.[10] 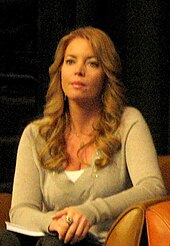 After her father died in 2013, his 66% controlling ownership of the Lakers passed to his six children via a trust, with each child receiving an equal vote.[13][14][15] Jerry's succession plan had Jeanie assume his previous title as the Lakers' governor as well as its team representative at NBA Board of Governors meetings.[14][16] That summer, Buss commented that "I would be more comfortable if I understood what the decision process [on the Lakers' basketball side] was, and I’m not always involved in it."[17] In 2013–14, she became president of the Lakers; she continued to lead the team's business operations, while also overseeing its basketball operations by working with brother Jim, who continued as executive VP of basketball operations.[18][19]

Buss terminated Mitch Kupchak as General Manager and accepted the resignation of her brother Jim as VP of Basketball Operations on February 21, 2017, installing Magic Johnson as President of Basketball Operations. Johnson, who played for the Lakers from 1979–1991 and in 1996, had also served as VP, coach, and part-owner of the organization. Buss would then hire sports agent Rob Pelinka to be the new general manager. According to Buss, the team did not go through a public interview process to hire a GM because she did not want to tip off her brother as the siblings were in a legal battle over control of the team.[20][21]

Buss married volleyball player Steve Timmons in 1990, but divorced after three years. According to Buss, "I never put my marriage first ... It was always business which attracted me."[22] She posed nude in the May 1995 issue of Playboy.[5] She was engaged to former Lakers coach and former New York Knicks President Phil Jackson for 4 years, after dating him since December 1999.[16][23] On December 27, 2016, Jackson cited "professional obligations and the geographic distance" resulting in breaking off their engagement.[24]