Daniel Jason Sudeikis[1] (/sʊˈdeɪkɪs/ suu-DAY-kiss; born September 18, 1975)[1] is an American actor, comedian, producer, and writer. In the 1990s, he began his career in improv comedy and performed with ComedySportz, iO Chicago (Improv Olympic), and The Second City. In 2003, Sudeikis was hired as a writer for Saturday Night Live and starred as a cast member from 2005 to 2013, playing Mitt Romney, among others.

In 2020, he co-created and began starring as the lead in the Apple TV+ sports comedy series Ted Lasso, which earned him four nominations at the Primetime Emmy Awards, including a win for Best Actor and wins for the Golden Globe Award for Best Actor in a TV Comedy Series and for the Screen Actors Guild Award for Outstanding Actor in a Comedy Series. Sudeikis has also acted in recurring roles in the comedy series 30 Rock (2007–2010), It's Always Sunny in Philadelphia (2010–2011), Portlandia (2011–2014), and The Last Man on Earth (2015–2018).

Daniel Jason Sudeikis was born on September 18, 1975 in Fairfax, Virginia to Dan[1] and Kathryn Sudeikis (née Wendt), a travel agent at Brennco and President of the American Society of Travel Agents.[2] His father is of Irish and Lithuanian descent, while his mother has German and Irish ancestry.[3][4][5] His maternal uncle is actor George Wendt, known for his role as Norm Peterson on Cheers, and his maternal great-grandfather was photographer Tom Howard.[6][7][8]

Sudeikis was born with anosmia, leaving him with no sense of smell.[9][10]

Sudeikis moved with his family to Overland Park, Kansas, which he has described as his hometown.[11][12] He graduated from Shawnee Mission West High School[13] and attended Fort Scott Community College on a basketball scholarship, but left before finishing.

In the 1990s, Sudeikis began his career in improv comedy. He began performing at ComedySportz (now called Comedy City) in Kansas City, Missouri. He moved to Chicago, Illinois, where he studied at the Annoyance Theatre and IO Theater (formerly known as ImprovOlympic) and was one of the founding members of the long form team, J.T.S. Brown. He also performed with Boom Chicago in Amsterdam, Netherlands.

Sudeikis was later cast in The Second City Touring Company. In the early 2000s, he became a founding member of The Second City Las Vegas, where he performed at the Flamingo.[14]

In 2003, while a regular performer at The Second City Las Vegas, Sudeikis was hired as a sketch writer for Saturday Night Live (SNL), and would occasionally make bit appearances as audience members or extras. In May 2005, he became a featured player on the show, and was upgraded to repertory status at the beginning of the show's 32nd season on September 30, 2006. In July 2013, Sudeikis announced that he was leaving SNL.[15] In 2015, 2016, and 2019 he made occasional appearances on the show.

Film, television and other work

Sudeikis had a recurring role on the series 30 Rock (2007–2010), appearing in a total of 12 episodes. He played Floyd DeBarber, a love interest of Tina Fey's character Liz Lemon. Sudeikis last appeared in four episodes towards the end of the show's fourth season in 2010.

In July 2008, Sudeikis co-starred with Bill Hader and Joe Lo Truglio in the web series The Line on Crackle.[17]

He had supporting roles in the movies The Bounty Hunter (2010) and Going the Distance (2010). On August 16, 2010, Sudeikis co-hosted WWE Raw with Going the Distance co-stars Charlie Day and Justin Long at the Staples Center in Los Angeles.[18]

Sudeikis was a voice actor on the animated-comedy series The Cleveland Show (2009–2013). He provided the voices for Holt Richter, Cleveland's wannabe hipster neighbor, and Terry Kimple, Cleveland's hard-partying high school buddy, who now works with Cleveland at the cable company. After being credited as a recurring guest in season one, Sudeikis was bumped up to a series regular beginning in season two. 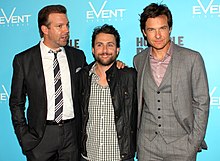 Sudeikis with Charlie Day and Jason Bateman at the 2011 premiere of Horrible Bosses.

In May 2010, Sudeikis joined the cast of the Seth Gordon comedy film Horrible Bosses (2011).[19] He had worked with Day when he played the role of Schmitty on It's Always Sunny in Philadelphia and reprised the role on that show's 7th-season finale. Sudeikis also played his first lead film role in the Farrelly brothers comedy Hall Pass (2011).

Sudeikis became the voice for a line of advertisements of Applebee's that began running in 2012.[23] Sudeikis made appearances in six episodes on the series Eastbound & Down (2012–2013).[24] He starred as David Clark, a drug dealer, in We're the Millers (2013), alongside Jennifer Aniston, Emma Roberts and Will Poulter. He reprised his role of Kurt Buckman in Horrible Bosses 2 (2014).

From November to December 2016, Sudeikis played the lead role of John Keating in the Classic Stage Company Off-Broadway production of Dead Poets Society.[26]

Sudeikis starred in Kodachrome (2017), alongside Ed Harris and Elizabeth Olsen. He made appearances as Glenn in Permission (2017) and as Dave Johnson in Downsizing (2017).

Sudeikis starred as a side-role/reference in the Derren Brown shows Derren Brown: Secret and Derren Brown Underground, where he performed on a screen during the credits, and his name was used as a reference during the show in 2017 and 2018.

Sudeikis starred in the thriller Driven.[27] Sudeikis voices the character of Justin Pin in the animated action comedy film Next Gen. He also plays Red again in the 2019 animated-comedy The Angry Birds Movie 2.

In 2019, Sudeikis appeared on the Star Wars series The Mandalorian as a Speeder Bike trooper.[28]

Sudeikis had portrayed Ted Lasso, a hapless American football coach brought to England to coach Tottenham as part of two promotional videos for NBC Sports in 2013 and 2014. In late 2019, Sudeikis co-wrote and starred in Ted Lasso about an American football coach that gets hired to coach an English football club. The series was released in August 2020 to a positive reception.[29] It has earned him a Golden Globe Award and a Screen Actors Guild Award.[30] At the 73rd Primetime Emmy Awards, he was nominated for and won Outstanding Comedy Series and Outstanding Lead Actor in a Comedy Series, and was also nominated for Outstanding Writing for a Comedy Series.[31]

Sudeikis played on basketball teams at the 2011 and 2016 NBA All-Star Celebrity Game. He and other Kansas City celebrities have hosted the Big Slick for 10 years. The event raises money for the Cancer Center at Children's Mercy Hospital. So far, the event has raised more than $6 million for the cause.[32]

He hosted the benefit concert Thundergong! at the Uptown Theater in Kansas City, Missouri on November 3, 2018 for the charity foundation Steps of Faith which helps provide prosthetic legs and arms.[33] 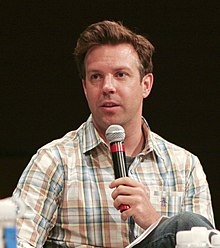 In June 2004, he married American screenwriter Kay Cannon after five years together. The two were on The Second City Las Vegas cast together.[34] They separated in 2008 and divorced in February 2010.[35]

In 2011, Sudeikis began dating American actress Olivia Wilde. They became engaged in January 2013.[36] They have a son, Otis, born in April 2014,[37] and a daughter, Daisy, born in October 2016.[38] Sudeikis and Wilde's relationship ended in November 2020, as Sudeikis told GQ magazine in a feature published the following July.[39]