Ime Sunday Udoka (/ˈiːmeɪ uːˈdoʊkə/ EE-may oo-DOH-kə; born August 9, 1977) is a Nigerian-American professional basketball coach and former player who is the head coach for the Boston Celtics of the National Basketball Association (NBA), currently suspended by the team for the 2022–23 season. He represented the Nigeria national team during his playing career. 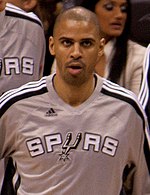 Udoka with the San Antonio Spurs in 2010

Udoka started his professional basketball career by playing in the NBDL with the Charleston Lowgators who drafted him with 39th overall pick in 2002 NBDL Draft.[3] He was called up to play with the Los Angeles Lakers on January 14, 2004, but was later waived. After a stint in Europe, Udoka returned to the United States and once again drafted in NBDL. This time he was drafted third overall by the Fort Worth Flyers in 2005 NBDL Draft.[4] He averaged 17.1 points and 6.2 rebounds per game with the Flyers.[5] On April 6, 2006, Udoka was signed by the New York Knicks. Udoka was waived by the Knicks on September 11, 2006.

Udoka was the last player invited to his hometown Portland Trail Blazers' training camp before the 2006–07 season, getting the invitation only after Aaron Miles failed a physical. Despite the death of his father during the preseason,[6] Udoka impressed the coaching staff with his defensive skills and made the team.[citation needed] After having played in only 12 NBA games in his career, Udoka started in 75 games played in the 2006–07 season. He played 28.6 minutes per game while averaging 8.4 points, 3.7 rebounds, and 0.9 steals.

In January 2012, Udoka signed with UCAM Murcia of the Spanish Liga ACB.[17]

In August 2012, Udoka joined the San Antonio Spurs as an assistant coach for Gregg Popovich. Udoka would win his first championship as the Spurs defeated the Miami Heat in the 2014 NBA Finals, 4–1.[18]

Udoka was also the key for LaMarcus Aldridge's decision to join the Spurs in 2015. Both Udoka and Aldridge played together with the Trail Blazers during Aldridge's rookie season.[19]

In June 2019, Udoka was hired as an assistant coach of the Philadelphia 76ers.[20] Udoka's head coach on the 76ers, Brett Brown, also coached under Gregg Popovich for the Spurs, and Udoka and Brown were on the same staff in the 2012–13 season.[21] 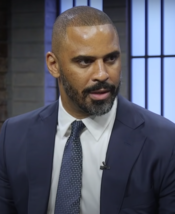 On June 28, 2021, Udoka was hired as head coach of the Boston Celtics, becoming the fifth head coach of African origin in Boston Celtics history.[23][24][25][26] Though the Celtics began the season 18–21, Udoka led them to a 51–31 record, finishing as the second seed in the Eastern Conference. The Celtics won the Eastern Conference title and made their first NBA Finals appearance since 2010. The Celtics lost in six games to the Golden State Warriors.[27]

On September 22, the Celtics suspended Udoka for the entirety of the 2022–23 season for violations of team policies,[28] pertaining to an improper intimate relationship with a female Celtics staff member.[29][30] Though the relationship was originally believed by the organization to be consensual, the woman later accused Udoka of making unwanted comments towards her.[31] Udoka issued an apology after the suspension was handed out. He chose not to resign from his position as a result of the violation, though Adrian Wojnarowski reported that Udoka is not guaranteed to stay with the organization following the 2022–23 season.[32] Assistant coach Joe Mazzulla took his place as the interim head coach.[33]

Udoka was a player on the Nigerian national team. At the 2006 FIBA World Championships, Udoka led Nigeria in scoring, assists, and steals.[26] Udoka also played for Nigeria in the 2005 and 2011 FIBA Africa Championships, winning a bronze medal in both tournaments.[34]

Udoka has served as an assistant coach for USA Basketball under his Spurs head coach, Gregg Popovich. Udoka's coaching role on the 2019 FIBA World Cup team helped him build relationships with Celtics players Jayson Tatum, Jaylen Brown, and Marcus Smart, who advocated for his hiring as the new Boston head coach.[35] Udoka also coached for Team USA under Popovich at the 2020 Summer Olympics in Tokyo, along with Celtics assistant Will Hardy.[36]

Udoka's father was of Nigerian descent,[6] which qualified the younger Udoka for Nigerian citizenship. His older sister, Mfon, played in the WNBA. His mother, who died in late 2011, was an American from Illinois.[37]