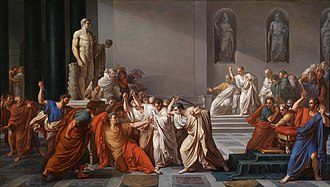 The Death of Julius Caesar (1806) by Vincenzo Camuccini

The Ides of March (/aɪdz/; Latin: Idus Martiae, Late Latin: Idus Martii)[1] is the 74th day in the Roman calendar, corresponding to 15 March. It was marked by several religious observances and was notable for the Romans as a deadline for settling debts.[2] In 44 BC, it became notorious as the date of the assassination of Julius Caesar which made the Ides of March a turning point in Roman history.

The Romans did not number each day of a month from the first to the last day. Instead, they counted back from three fixed points of the month: the Nones (the 5th or 7th, nine days inclusive before the Ides), the Ides (the 13th for most months, but the 15th in March, May, July, and October), and the Kalends (1st of the following month). Originally the Ides were supposed to be determined by the full moon, reflecting the lunar origin of the Roman calendar. In the earliest calendar, the Ides of March would have been the first full moon of the new year.[3] 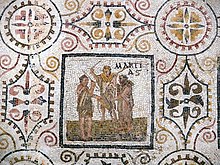 Panel thought to depict the Mamuralia, from a mosaic of the months in which March is positioned at the beginning of the year (first half of the 3rd century AD, from El Djem, Tunisia, in Roman Africa)

The Ides of each month were sacred to Jupiter, the Romans' supreme deity. The Flamen Dialis, Jupiter's high priest, led the "Ides sheep" (ovis Idulis) in procession along the Via Sacra to the arx, where it was sacrificed.[4]

In addition to the monthly sacrifice, the Ides of March was also the occasion of the Feast of Anna Perenna, a goddess of the year (Latin annus) whose festival originally concluded the ceremonies of the new year. The day was enthusiastically celebrated among the common people with picnics, drinking, and revelry.[5] One source from late antiquity also places the Mamuralia on the Ides of March.[6] This observance, which has aspects of scapegoat or ancient Greek pharmakos ritual, involved beating an old man dressed in animal skins and perhaps driving him from the city. The ritual may have been a new year festival representing the expulsion of the old year.[7][8]

In the later Imperial period, the Ides began a "holy week" of festivals celebrating Cybele and Attis,[9][10][11] being the day Canna intrat ("The Reed enters"), when Attis was born and found among the reeds of a Phrygian river.[12] He was discovered by shepherds or the goddess Cybele, who was also known as the Magna Mater ("Great Mother") (narratives differ).[13] A week later, on 22 March, the solemn commemoration of Arbor intrat ("The Tree enters") commemorated the death of Attis under a pine tree. A college of priests, the dendrophoroi ("tree bearers") annually cut down a tree,[14] hung from it an image of Attis,[15] and carried it to the temple of the Magna Mater with lamentations. The day was formalized as part of the official Roman calendar under Claudius (d. 54 AD).[16] A three-day period of mourning followed,[17] culminating with celebrating the rebirth of Attis on 25 March, the date of the vernal equinox on the Julian calendar.[18] 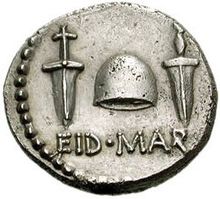 Reverse side of a coin issued by Caesar's assassin Brutus in the autumn of 42 BC, with the abbreviation EID MAR (Eidibus Martiis – on the Ides of March) under a "cap of freedom" between two daggers

In modern times, the Ides of March is best known as the date on which Julius Caesar was assassinated in 44 BC. Caesar was stabbed to death at a meeting of the Senate. As many as 60 conspirators, led by Brutus and Cassius, were involved. According to Plutarch,[19] a seer had warned that harm would come to Caesar no later than the Ides of March. On his way to the Theatre of Pompey, where he would be assassinated, Caesar passed the seer and joked, "The Ides of March are come", implying that the prophecy had not been fulfilled, to which the seer replied "Aye, Caesar; but not gone."[19] This meeting is famously dramatised in William Shakespeare's play Julius Caesar, when Caesar is warned by the soothsayer to "beware the Ides of March."[20][21] The Roman biographer Suetonius[22] identifies the "seer" as a haruspex named Spurinna.

Caesar's death was a closing event in the crisis of the Roman Republic, and triggered the civil war that would result in the rise to sole power of his adopted heir Octavian (later known as Augustus).[23] Writing under Augustus, Ovid portrays the murder as a sacrilege, since Caesar was also the Pontifex Maximus of Rome and a priest of Vesta.[24] On the fourth anniversary of Caesar's death in 40 BC, after achieving a victory at the siege of Perugia, Octavian executed 300 senators and equites who had fought against him under Lucius Antonius, the brother of Mark Antony.[25] The executions were one of a series of actions taken by Octavian to avenge Caesar's death. Suetonius and the historian Cassius Dio characterised the slaughter as a religious sacrifice,[26][27] noting that it occurred on the Ides of March at the new altar to the deified Julius.

Presented content of the Wikipedia article was extracted in 2021-03-27 based on https://en.wikipedia.org/?curid=40113