For other ships with the same name, see HMS Namur.

HMS Namur was a 90-gun second-rate ship of the line of the Royal Navy, built at Chatham Dockyard to the draught specified by the 1745 Establishment as amended in 1750, and launched on 3 March 1756.[1] HMS Namur’s battle honours surpass even those of the more famous HMS Victory.[2] 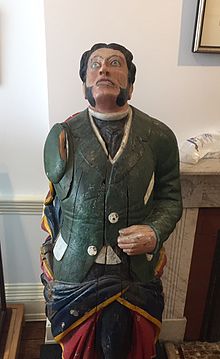 Namur was the flagship of Vice-Admiral Edward Boscawen in the capture of Louisburg in 1758. General James Wolfe had sailed across the Atlantic in Namur on this occasion before his capture of Quebec. Also on this journey was 6th Lieutenant Michael Henry Pascal, with his slave and servant Olaudah Equiano (called Gustavus Vasser at the time - this was the slave name given him by Pascal[3]). In his book,[4] Equiano wrote that the ceremony of surrender was "the most beautiful procession on the water I ever saw", and gives more detail of the occasion.[5] In 1758, fifteen Namur sailors were tried and condemned to death by hanging for mutiny; they had protested to be replaced aboard another ship. The King's grace reprieved them from death penalty, except for one sailor.[6]

Namur was the flagship of Admiral Sir George Pocock in the Battle of Havana (1762).

Namur was razeed to a 74-gun ship in 1805, and took part in the naval engagement of 4 November 1805 (the Battle of Cape Ortegal), when the remnants of the French and Spanish fleet which had escaped from Trafalgar was engaged by Lord Strachan's squadron; she took on and captured the French warship Formidable.[8] She was placed on harbour service in 1807 and remained in this role until 1833, when she was finally broken up.[1]

Some of Namur's timbers were used to support the floor of the wheelwright's workshop at Chatham Dockyard. They were rediscovered there in 1995 and identified in 2003.[9][10] The restored timbers form the centerpiece of the "Command of the Oceans" gallery at the Chatham Historic Dockyard museum opened in 2016.[11]