Dutch association football player and manager
In this Dutch name, the surname is Van Bronckhorst.

Giovanni Christiaan van Bronckhorst OON (born 5 February 1975), is a Dutch former footballer and currently manager of Scottish Premiership club Rangers. Formerly a midfielder, he moved to left back later in his career.[2][3]

During his club career, Van Bronckhorst played for RKC Waalwijk, Feyenoord, Rangers, Arsenal, Barcelona and again with Feyenoord. He was an instrumental player in Barcelona's 2005–06 UEFA Champions League victory, being in the starting line-up of the final, having played every Champions League match for Barcelona that season.[2]

Van Bronckhorst earned 107 caps for the Netherlands national team, and played for his country in three FIFA World Cups, in 1998, 2006 and 2010, as well as three UEFA European Championships, in 2000, 2004 and 2008. After captaining the Oranje in the 2010 World Cup final, he was elected into the Order of Orange-Nassau. The 2010 World Cup final was the last match in his career.

After assisting the Dutch under-21 team and Feyenoord, Van Bronckhorst became Feyenoord manager in May 2015. He won the KNVB Cup in his first season and the club's first Eredivisie title for 18 years in 2017.

Van Bronckhorst was born in Rotterdam to Victor van Bronckhorst, an Indonesian-Dutch father, and Fransien Sapulette, an Indonesian mother of Moluccan descent.[4] He began playing for a local amateur youth team in Rotterdam, Linker Maas Oever, from age six. He joined the youth academy at Feyenoord the following year.[4] In 1990, aged 15, the club offered him a professional contract, which he accepted.[4] He won the Dutch Youth League with Feyenoord in 1991, but struggled to break into the first team.[5] He was loaned out to RKC Waalwijk, making his league debut in 1993. He returned to Feyenoord for the 1994–95 season, but was used as a fringe player, making only ten appearances for the club.[5] 1995–96 was his breakthrough season, as he started almost every match for Feyenoord, playing alongside the likes of Regi Blinker and Henrik Larsson.[5]

Domestically, with Feyenoord failing to break the PSV–Ajax stranglehold on the Eredivisie for the fourth-straight year, and major players such as Henrik Larsson leaving the team, Van Bronckhorst began to search for a new club.[6] He chose to join Dick Advocaat (his former manager at international U-16 and U-18 level) at Rangers, joining the club in 1998 for a reported transfer fee between £5–5.5 million.[7]

Van Bronckhorst was already a regular international when he signed for Rangers in 1998, joining up with compatriot Dick Advocaat, the Scottish club's new manager. In his first competitive game for Rangers, a remarkable UEFA Cup tie away to League of Ireland side Shelbourne (although played at Tranmere Rovers' Prenton Park), Van Bronckhorst marked his debut with a finely-struck goal as Rangers came back from 3–0 down to win the match 5–3.[8] Van Bronckhorst went on to score 22 goals for Rangers (13 in the league, three in the Scottish Cup, one in the Scottish League Cup, three in the UEFA Champions League and two in the UEFA Cup), mostly as a play-making midfielder of notable skill and subtlety, before joining Arsenal for a fee of £8.5 million, signing a five-year contract.[9]

Arsène Wenger had signed Van Bronckhorst in June 2001 for £8 million. [10][11] He sought to replace the midfield void from by the departure of Emmanuel Petit from Arsenal, and so partnered Patrick Vieira in the centre.[12] However, Van Bronckhorst's start at Highbury was marked by a cruciate knee ligament injury which saw him sidelined after only a few months at the club. Despite this, Van Bronckhorst went on to win the Premier League title in 2001–02 and the FA Cup in 2002–03 with Arsenal. In all, he made 64 appearances for the Gunners, scoring twice.[2][3][13]

As the 2003–04 season approached, Van Bronckhorst had the opportunity to move to Barcelona and work with its new head coach Frank Rijkaard on a one-year loan, with a view to a permanent transfer.[14]

Van Bronckhorst at Feyenoord in 2007

After adapting to his new role as a left-back, he helped Barça to a revival in the second half of the season. In May 2004, Van Bronckhorst completed his move from Arsenal to Barcelona for a fee of €2 million, signing a three-year deal.[15] He won the Liga title in the 2004–05 season after some of his finest displays together with four goals to his credit. In 2005–06, he helped his club repeat as Liga champions while winning the 2005–06 UEFA Champions League as well (he was the only player who participated in all Champions League matches that season). In Spain, he used "Gio" as the name on his shirt.[16]

Van Bronckhorst had a year remaining on his Barcelona contract in 2007, but returned to Feyenoord on 27 June 2007 due to a clause in his contract stipulating he could join Feyenoord on a free transfer.[16] Shortly after, head coach Bert van Marwijk made him captain of the club. He would go on to become a pivotal member of the squad, providing stability in an injury-hit side. At the end of his first season, he led "De Stadionclub" to win the 2007–08 KNVB Cup following a 2–0 victory in the final against Roda JC.[17]

Van Bronckhorst made his debut for the national Olympic team in 1996, although the Netherlands failed to qualify for the 1996 Olympic Games in Atlanta.[5] He was given his first full international cap in August 1996, being given a starting place by Guus Hiddink in the Oranje's lineup to face Brazil in a friendly at the Amsterdam Arena.[6] Van Bronkhorst scored his first goal for Ons Oranje in August 1996 at the FNB Stadium against South Africa. He was part of the Netherlands squad for the 1998 FIFA World Cup, but did not play during the tournament.[6] He only saw limited action in Euro 2000 on home soil, as cover for left-back Arthur Numan.

Van Bronckhorst (who was regularly played as a midfielder at club level at the time) was deployed by manager Dick Advocaat as a left-back at Euro 2004. The Netherlands reached the semi-finals of the tournament, only to fall to hosts Portugal.

Van Bronckhorst as captain of the Netherlands.

Van Bronckhorst was a regular in the national team for the 2006 World Cup qualification campaign. In the round of 16 match against Portugal (see Battle of Nuremberg), he received a red card in a match that saw four red cards given, a World Cup record.[18]

On 9 June 2008, in a group match against Italy, he cleared the ball off his own line, ran deep into the Italian half, then delivered a cross to Dirk Kuyt. Kuyt then headed down to Wesley Sneijder who slotted the ball past the advancing Gianluigi Buffon. Van Bronckhorst later scored another goal to condemn the then World Cup champions to a 3-0 defeat.[20]

Prior to Euro 2008, captain Edwin van der Sar announced his intention to retire from international football after the tournament; he played his last match as captain in the 3–1 quarter-final loss to Russia. Van Bronckhorst was named Van der Sar's replacement as captain.[21]

Van Bronckhorst was included in the Netherlands' preliminary squad for the tournament,[22] and on 27 May 2010, Dutch manager Bert van Marwijk announced he would be part of the final squad of 23 and would serve as team captain.[23] In the semi-final against Uruguay, he scored the opening goal of a 3–2 win. The powerful long-range strike – which rose into goalkeeper Fernando Muslera's top left-hand corner – was widely considered one of the best goals in World Cup history.[24][25]

Van Bronckhorst's final match for the Netherlands and as a professional footballer came in the World Cup final against Spain.[26] He was substituted in the 105th minute for Edson Braafheid with the score 0–0, only for Andrés Iniesta to condemn the Dutch to a defeat, scoring the only goal of the match in the 116th minute. After ending the tournament as runners-up, Van Bronckhorst stated he was proud of what the team had achieved.[27] 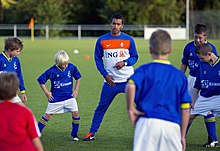 Having retired at the end of the 2009–10 season prior to the 2010 World Cup, it was announced on 21 July 2011 that Van Bronckhorst would assist newly appointed Feyenoord manager Ronald Koeman, alongside fellow ex-Feyenoord player Jean-Paul van Gastel.[28] Feyenoord finished the season second behind Ajax, thereby qualifying for the 2012–13 UEFA Champions League.[29] On 23 March 2015, it was announced Van Bronckhorst would be the new manager of Feyenoord after Fred Rutten would leave at the end of that season.[30]

At the start of the 2019–20 season, some press reports suggested that Van Bronckhorst had accepted a role at Manchester City and other clubs owned by the Abu Dhabi United Group to develop his coaching skills and learn about different activities at the football club. This also led to speculation that he was envisioned to replace Pep Guardiola as the club's manager at some indeterminate time in the future.[34][35]

On 4 January 2020, Van Bronckhorst signed with Chinese Super League side Guangzhou R&F.[36] He came 11th in his only season, then quit in December so he could return to his family.[37]

On 18 November 2021, Van Bronckhorst was appointed manager of Rangers, whom he was part of during his playing career.[38]