Gerhard Müller (German pronunciation: [ˈɡɛɐ̯t ˈmʏlɐ]; 3 November 1945 – 15 August 2021) was a German professional footballer. A striker renowned for his clinical finishing, especially in and around the six-yard box, he is widely regarded as one of the greatest goalscorers in the history of the sport.[2]

At international level with West Germany, he scored 68 goals in 62 appearances, and at club level, in 15 years with Bayern Munich in which he scored 365 goals in 427 Bundesliga matches, he became – and still is – record holder of that league. In 74 European club games he scored 65 goals. Averaging over a goal a game with West Germany, Müller was, as of 11 July 2021, 21st on the list of all time international goalscorers, despite playing fewer matches than every other player in the top 48. Among the top scorers, he has the third-highest goal-to-game ratio. He also had the highest ratio of 0.97 goals per game in the European Cup, scoring 34 goals in 35 matches.[3]

Nicknamed "Bomber der Nation" ("the nation's Bomber") or simply "Der Bomber",[2] Müller was named European Footballer of the Year in 1970. After a successful season at Bayern Munich, he scored ten goals at the 1970 FIFA World Cup for West Germany where he received the Golden Boot as top goalscorer. In 1972, he won the UEFA European Championship and was the top goalscorer, scoring two goals in the final. Two years later, he scored four goals in the 1974 World Cup, including the winning goal in the final.

Müller held the all-time goal-scoring record in the World Cup with 14 goals for 32 years.[4] In 1999, Müller was ranked ninth in the European player of the Century election held by the International Federation of Football History & Statistics (IFFHS), and he was voted 13th in the IFFHS' World Player of the Century election.[5] In 2004, Pelé named Müller in the FIFA 100 list of the world's greatest living players.[2] 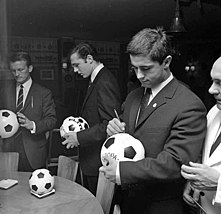 Müller autographing a football in 1967. To his right are Franz Beckenbauer and Werner Olk.

Born in Nördlingen, Germany, Müller began his football career at his hometown club TSV 1861 Nördlingen. Müller joined Bayern Munich in 1964, where he teamed up with future stars Franz Beckenbauer and Sepp Maier. The club, which would go on to become the most successful German club in history, was then still in the Regionalliga Süd (Regional League South), which was one level below the Bundesliga at the time. After one season, Bayern Munich advanced to the Bundesliga and started a long string of successes. With his club, Müller amassed titles during the 1960s and 1970s: he won the German Championship four times, the DFB-Pokal four times, the European Champions' Cup three consecutive years (the first West German team to win it; Müller scored in the 1974 final replay and the 1975 final), the Intercontinental Cup once, and the European Cup Winners' Cup once.[6]

An opportunistic goal-scorer, Müller also became German top scorer seven times and European top scorer twice. Müller scored 365 goals in 427 Bundesliga matches for Bayern Munich, almost 100 goals over the second-most successful Bundesliga scorer, Robert Lewandowski.[6] He held the single-season Bundesliga record with 40 goals in season 1971–72, a record that would be held until Lewandowski scored 41 goals during the 2020–21 season[7]. Müller averaged a goal per game or better in seven of his 14 seasons. He scored 68 goals in 62 German international games.[6] He held the record for most goals scored in a calendar year, striking 85 goals in 1972,[8] until his total was surpassed 40 years later in 2012 by Lionel Messi.[9]

After his career in the Bundesliga Müller went to the United States, where he joined the Fort Lauderdale Strikers of the North American Soccer League (NASL) in 1979.[10] He played three seasons with this team, scoring 40 goals,[10] and reaching, but losing, the league final in 1980.[11] 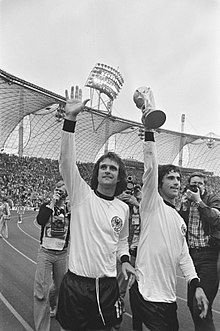 Müller (right) celebrating after winning the 1974 FIFA World Cup. To his left is Wolfgang Overath.

Müller scored 68 goals in 62 games for West Germany.[6] He was Germany's all-time leading scorer for almost 40 years until surpassed by Miroslav Klose in 2014, though Klose required over double the number of caps to do so, scoring his 69th goal in his 132nd appearance.[12] Müller's international career started in 1966 and ended on 7 July 1974 with victory at the 1974 World Cup at his home stadium in Munich.[13] He scored the winning goal for the 2–1 victory over Johan Cruyff's Netherlands in the final. His four goals in that tournament and his ten goals at the 1970 World Cup combined made him the all-time highest World Cup goalscorer at the time with 14 goals. His record stood until the 2006 tournament, coincidentally held in Germany, when it was broken by Brazilian striker Ronaldo, who also required more matches than Müller to achieve his tally.[4] Müller also participated in the 1972 European Championship, becoming top scorer with four goals (including two in the final) and winning the Championship with the West German team.[6]

Müller quit playing for West Germany after the 1974 World Cup triumph following an argument with the German Football Association at the post-tournament celebration, when officials' wives were allowed to attend but players' wives were not. 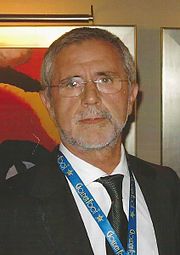 After Müller ended his career in 1982, he fell into a slump and suffered from alcoholism. However, his former companions at Bayern Munich convinced him to go through alcohol rehabilitation. When he emerged, they gave him a job as a coach at Bayern Munich II. There is also a collection of apparel released by sporting giants Adidas under the Gerd Müller name. It is part of the Adidas originals series. In July 2008, the Rieser Sportpark, in Nördlingen, where Müller had begun his career, was renamed the Gerd-Müller-Stadion in his honour.[14][15]

In his book, Brilliant Orange: The Neurotic Genius of Dutch Football, author David Winner writes, "Müller was short, squat, awkward-looking and not notably fast; he never fitted the conventional idea of a great footballer, but he had lethal acceleration over short distances, a remarkable aerial game, and uncanny goalscoring instincts. His short legs gave him a low center of gravity, so he could turn quickly and with perfect balance in spaces and at speeds that would cause other players to fall over. He also had a knack of scoring in unlikely situations."[19]

Müller used extreme acceleration and deceptive changes of pace to get to loose balls first, and bypass defenders.[20] His teammate Franz Beckenbauer has emphasized Müller's unusual speed: "His pace was incredible. In training I have played against him and I never had a chance."[21]

A goals tally in bold indicates that Müller was the competition's top scorer for that season.

Müller scored 68 goals in 62 games for West Germany. His 14 goals in FIFA World Cup tournaments were a record between 1974 and 2006. This score was bettered in 2006 by Brazil's Ronaldo, and eight years later by German Miroslav Klose, who also broke Müller's record for goals for Germany.[28][29] However, Müller managed to score eight hat-tricks in his international career.[30]