Geographic center of the United States

Center location of the 48 or 50 states 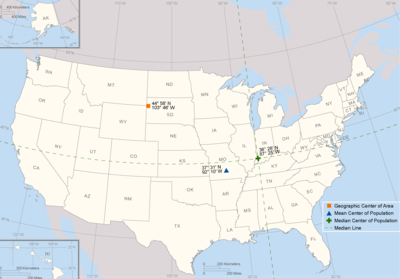 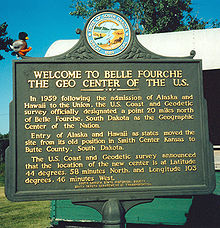 The old marker for Geographic Center of the U.S. at Smith Center, Kansas in 1918

While any measurement of the exact center of a land mass will always be imprecise due to changing shorelines and other factors, the NGS coordinates identify the spot as an uninhabited parcel of private pastureland approximately 12 mi (19 km) east of the cornerpoint where the South Dakota–Wyoming–Montana borders meet. According to the NGS data sheet, the actual marker is "set in an irregular mass of concrete 36 inches below the surface of the ground."[2]

For public commemoration, a nearby proxy marker is located in a park in Belle Fourche,[3] where one will find a flag atop a small concrete slab bearing a U.S. Coast and Geodetic Survey Reference Marker. 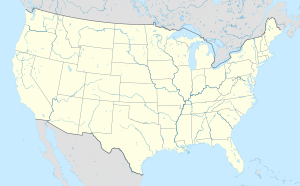 While any measurement of the exact center of a land mass will always be imprecise due to changing shorelines and other factors, the NGS coordinates are recognized in a historical marker in a small park at the intersection of AA Road and K-191. It is accessible by a turn-off from U.S. Route 281.

It is distinct from the geographic center of the 50 United States located at a point northeast of Belle Fourche, South Dakota, reflecting the 1959 additions of the states of Alaska and Hawaii.

The marker located near Lebanon, Kansas 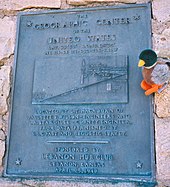 A close-up of the plaque on the historical marker 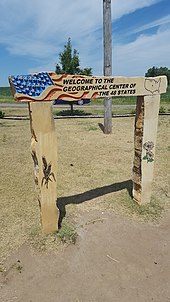 An additional monument adjacent to the marker

In order to protect the privacy of the private land owner where the point identified by the 1918 survey falls,[6] a proxy marker was erected in 1940 about half a mile away.[7]

An American flag usually flies atop a pole placed on the monument. A covered picnic area and the U.S. Center Chapel,[8] a small eight-pew chapel, are nearby.

In 1918, the Coast and Geodetic Survey found this location by balancing on a point a cardboard cutout shaped like the U.S.[9] This method was accurate to within 20 miles, but while the Geodetic Survey no longer endorses any location as the center of the U.S., the identification of Lebanon, Kansas, has remained.[10][11]

The geographic center of the contiguous United States is mentioned in Neil Gaiman's American Gods as a neutral ground where the modern and the old gods can meet despite the war between them.

In the 1969 Disney movie The Computer Wore Tennis Shoes, the final question of the college knowledge program is 'A small Midwest city is located exactly on an area designated as the 'geographic center of the United States.' For ten points and $100,000, can you tell us the name of that city?' The answer of Lebanon, Kansas is accepted as correct.