Garry Kent Marshall was born in The Bronx, New York, on November 13, 1934, the son of Anthony "Tony" Masciarelli (later Anthony Wallace Marshall; 1906–1999), a director of industrial films and producer, and Marjorie Irene (née Ward; 1908–1983), the owner and teacher in a tap dance school.[3] He was the brother of actress/director Penny Marshall and Ronny Marshall Hallin, a television producer. His father was of Italian descent, his family having come from San Martino sulla Marrucina, Chieti, Abruzzo,[4] and his mother was of German, English, and Scottish ancestry.[5] His father changed his last name from Masciarelli to Marshall before his son Garry was born.[2] Garry Marshall was baptized Presbyterian and also raised Lutheran for a time.[6]

He attended De Witt Clinton High School and Northwestern University, where he wrote a sports column for The Daily Northwestern, and was a member of the Alpha Tau Omega fraternity.[7][8] Beginning in 1956, Marshall served a stint in the U.S. Army as a writer for Stars and Stripes and Seoul News, and was production chief for Armed Forces Radio Network; serving in Korea.[9][10][11]

Marshall began his career as a joke writer for such comedians as Joey Bishop and Phil Foster and became a writer for The Tonight Show with Jack Paar.[12] He originally partnered with writer Fred Freeman.

In 1961, he and Freeman moved to Hollywood, where they broke into writing sitcoms on The Joey Bishop Show. Freeman, however, found that he didn't enjoy sitcom work, and moved back to New York. Marshall soon teamed up with new writing partner Jerry Belson, and the two worked as a team through the 1960s. The pair worked on The Dick Van Dyke Show, The Joey Bishop Show, The Danny Thomas Show, and The Lucy Show. Their first television series as creator-producers was Hey, Landlord, which lasted one season (1966–67). Then they adapted Neil Simon's play The Odd Couple for television. Moving into the 1970s, Marshall worked on his own or with others, and created Happy Days, Laverne & Shirley (starring his sister Penny, who had earlier had a recurring role on The Odd Couple), and Mork & Mindy, which were produced by his associates Thomas L. Miller, Robert L. Boyett, and Edward K. Milkis.[13] He was also a co-creator of Makin' It,[14] which the three men also produced.

In the early 1980s, he met Héctor Elizondo while playing basketball, and they became great friends. Elizondo appeared in every film that Marshall directed, beginning with his first feature film Young Doctors in Love. Elizondo once noted that he is written into all of Marshall's contracts whether he wanted to do the film or not.[15]

In the opening credits of Exit to Eden (their eighth film together), Elizondo is credited "As Usual ... Hector Elizondo". In 1984, Marshall had a film hit as the writer and director of The Flamingo Kid.[16] 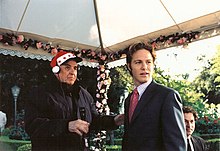 Marshall and Jonny Blu on the set of The Princess Diaries 2: Royal Engagement in 2004

Marshall wore many hats during this period of his career: most of his hit television series were created and executive produced by him. His first producing assignment came with Hey, Landlord in 1966. He stepped up the very next year, producing The Lucy Show.[17] Then came successes in producing The Odd Couple, Laverne & Shirley, Blansky's Beauties, Mork & Mindy, Angie, and Happy Days. He launched independent productions through his theater (The Falcon in Toluca Lake) and in association with productions launched with talent he was grooming and working with for years.[citation needed]

One such project titled Four Stars was directed by Lynda Goodfriend (who portrayed Lori Beth in Happy Days), and was based on a play Goodfriend had read when she was studying at the Lee Strasberg Center, which had been written by John Schulte and Kevin Mahoney. It starred Julie Paris (the daughter of Jerry Paris) and Bert Kramer. Schulte later co-wrote with TV veteran writer and producer Fred Fox, Jr., who penned and produced a number of Marshall's television series, including Happy Days and Laverne & Shirley.[18] Marshall went on to focus on directing feature films, with a series of hits, such as Beaches, Pretty Woman, The Princess Diaries, Valentine's Day, and New Year's Eve. 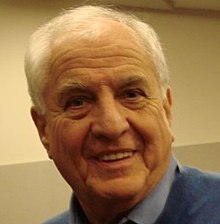 Marshall was also an actor, appearing in Murphy Brown and in such films as Soapdish, On the Lot, and Lost in America, and provided a guest-starring voice for The Simpsons episodes "Eight Misbehavin'" and "Homer the Father". He also appeared in two episodes of Happy Days as a drummer. He was also a drummer in the second last scene of The Princess Diaries 2: Royal Engagement.

His theater credits included Wrong Turn at Lungfish, which he wrote in collaboration with Lowell Ganz,[19] The Roast with Jerry Belson,[20] Shelves and Happy Days: A New Musical with Paul Williams,[21] which had its premiere at the Falcon Theater in Burbank, California, February 24, 2006.[22] He portrayed the role of "director" on Burbank's "Lights... camera... action!" float in the 2014 Rose Parade. In 2014, Marshall appeared in a guest star role in a February episode in season 11 of Two and a Half Men.

In 1997, he co-authored the memoir Wake Me When It's Funny with his daughter Lori Marshall.[citation needed]

On the morning of July 19, 2016, Marshall, aged 81, died at a hospital in Burbank, California, due to complications of pneumonia after suffering a stroke.[24][25]

In 1996, Marshall was awarded the Women in Film Lucy Award in recognition of excellence and innovation in creative works that have enhanced the perception of women through the medium of television.[30] He was inducted into the Television Hall of Fame for his contributions to the field of television in 1997.[31]

In 2012, he was inducted into the National Association of Broadcasters' Broadcasting Hall of Fame.[32]

Marshall received the Valentine Davies Award (1995) and Laurel Award for TV Writing Achievement (2014)[33] from the Writers Guild of America.[34]