Not to be confused with Jeezy.
American rapper from California

When Gillum was in the first grade, his mother left his father, an associate professor of art at CSU Fresno.[5] Gillum moved in with his grandparents in Berkeley, California. They later moved to North Oakland, although Gillum continued to attend school in Berkeley. Gillum attended Loyola University New Orleans and graduated in 2011.[6]

Starting out as a record producer, G-Eazy began working on singles while he was still a student at the Loyola University at New Orleans with his producer Christoph Andersson who also was a student there.[7][8] He gained some recognition for being a part of the new hip hop scene back in the East Bay Area, joining with such artists as Lil B, Crohn and The Cataracs.[9][10] He became a member of a local hip hop group called "The Bay Boyz", who had released several songs on their Myspace page.[11] In 2010, G-Eazy was given an opportunity to open for some well-known artists, most notably Lil Wayne[12] and Snoop Dogg.[13][14][15]

G-Eazy's mixtapes at this period of time were met with limited success. In August 2011, he released The Endless Summer, with an updated version of the 1961 hit song "Runaround Sue", which garnered over four million views via YouTube. The music video was directed by Tyler Yee. The mixtape features guest appearances from Greg Banks, Erika Flowers and Devon Baldwin.[16] In November 2011, Gillum embarked on a nationwide tour with Shwayze.[17] "My Life Is a Party" was featured in the game Saints Row: The Third on an in-game radio station.[18] 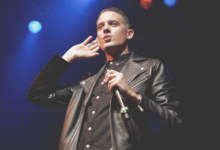 On June 16, 2012, G-Eazy performed all United States dates on the annual Vans Warped Tour.[19][20] On July 25, 2012, the Excellent Adventure Tour was announced, which featured Hoodie Allen and G-Eazy. The two performed in cities across the U.S., including Pittsburgh, St. Louis, Columbus, Des Moines, New Orleans, Atlanta, Austin, and Philadelphia.[21] On September 26, 2012, G-Eazy released his first full-length album, Must Be Nice. The album, which was completely independent of a label, landed at number 3 on the iTunes Hip-Hop Chart.[22] On July 9, 2013, G-Eazy, alongside 2 Chainz, opened for Lil Wayne's "America's Most Wanted Tour".[23] On December 15, 2013, G-Eazy and Master Chen B performed "Lotta That" from These Things Happen in New York City. On January 15, 2014, G-Eazy announced his "These Things Happen Tour" with Rockie Fresh, KYLE, and Tory Lanez accompanying him. The tour ran for 40 stops throughout the United States and Canada from February until April 2014.[24]

On June 23, 2014, G-Eazy released his major-label debut album, These Things Happen. The album topped the US Billboard's Hip-Hop/R&B and Top Rap Albums charts, also earning him the number 3 spot on the US Billboard 200 and the Top Digital Albums Chart. The album has sold nearly 265,000 copies to date.[25] On October 21, 2014, Gillum embarked on his sold-out "From the Bay to the Universe" tour.[26] The tour traveled across the globe to countries like Australia and New Zealand. This was his first headlining tour overseas.

During the summer of 2015, G-Eazy played some of the main stages at a series of notable music festivals, including Lollapalooza, Electric Forest, Bonnaroo, Outside Lands, Made in America, and Austin City Limits. With the rise of his music career, Gillum has also taken up in interest in fashion by releasing a collaboration with Rare Panther in the fall of 2015 and being named GQ Magazine’s top 10 most stylish at New York Fashion Week.[27] Gillum's second album, When It's Dark Out, was released on December 4, 2015.[28] On January 6, 2016, G-Eazy launched his second world tour. The tour saw G-Eazy tour the United States, Europe, and Australia.[29] His single "Me, Myself & I", in collaboration with Bebe Rexha, peaked at number 7 on the US Billboard Hot 100.[30]

He co-headlined the Endless Summer tour with fellow rapper Logic, along with supporting acts YG and Yo Gotti, from June to August. Before the tour, he announced his new mixtape, Endless Summer II. He cancelled the tape due to problems with sample clearance.[31] In May 2016, G-Eazy confirmed that he would be featured on Britney Spears' single "Make Me...".[32] The single was released on July 15, 2016, and serves as the lead single from Spears' ninth studio album.[33]

G-Eazy performed "Make Me..." and "Me, Myself & I" with Spears at the 2016 MTV Video Music Awards and the 2016 iHeartRadio Music Festival.[citation needed]

Gillum released an EP with Guatemalan DJ Carnage called Step Brothers on March 27, 2017.[34] G-Eazy released his new single, a collaboration with singer Kehlani called "Good Life", which is a part of the eighth installment of the film franchise Fast & Furious, titled The Fate of the Furious. He was also featured in the new Dillon Francis single titled "Say Less".[35]

On June 14, 2017, G-Eazy announced through Instagram and Twitter that his next studio album, The Beautiful & Damned, would be released in the fall of 2017.[36] On November 8, 2017, the official release day was announced as December 15, as well as an accompanying short film.[37]

On December 5, 2017, G-Eazy released his second single from The Beautiful & Damned titled "Him & I" with Halsey, with whom he was in a relationship. They performed the song together on Dick Clark's New Year's Rockin' Eve of 2017.[38] On February 27, 2019 G-Eazy released the single, "West Coast", featuring Blueface and released the video on March 28, 2019, adding ALLBLACK and YG.

G-Eazy released an EP B-Sides on June 25, 2019, which contained the songs that wouldn't make it onto his upcoming album. This EP spawned the song "Bang" with American rapper Tyga. He later updated the EP on August 22 and September 19.[39]

Gillum released the single "I Wanna Rock", featuring American rapper Gunna, as the lead single of his EP Scary Nights, on October 16.[40] The EP was released on October 18.[41]

In March 2020, G-Eazy announced a new project called Everything's Strange Here.[42] The album was officially released on June 26, 2020. G-Eazy's upcoming fifth studio album, These Things Happen Too, is expected to be released in 2021.[4] On February 5, 2021 G-Eazy released the single "Provide" featuring Chris Brown and Mark Morrison off These Things Happen Too.

In 2018, G-Eazy headlined a concert for Bay Area fire relief that raised $15M, pulled out of H&M sponsorship deal after blowback about a sweatshirt advertisement that some considered to be racist, performed at an Everytown fundraiser on the eve of March For Our Lives, and used his platform to speak out against gun violence.[44][45][46] Also that year, G-Eazy launched the Endless Summer Fund, which is a non-profit dedicated to helping young people reach their full potential and strengthening the Bay Area community.[47]

On May 2, 2018, Gillum was arrested in Stockholm, Sweden on suspicion of assault, possession of narcotics and use of narcotics, after he allegedly punched a security guard and was found to have cocaine in his pocket.[48] Gillum pleaded guilty to violent resistance, narcotics possession, and assault against an official in court on May 4. He was sentenced to probation, and ordered to pay a fine of $10,000 and a $900 compensation fee to the security guard he assaulted.[49][50]