Frances Louise McDormand (born Cynthia Ann Smith; June 23, 1957) is an American actress and producer. McDormand is the recipient of numerous accolades, including four Academy Awards, two Golden Globe Awards, three British Academy Film Awards, two Primetime Emmy Awards, and a Tony Award, one of the few performers to achieve the "Triple Crown of Acting." One of the most acclaimed actresses of her generation, she is known for her portrayals of quirky, headstrong female characters. Although primarily recognized for her roles in small-budget independent films, McDormand's worldwide box office gross exceeds $2.2 billion helped by her appearances in Transformers: Dark of the Moon (2011) and Madagascar 3: Europe's Most Wanted (2012).[1]

McDormand was born Cynthia Ann Smith in Gibson City, Illinois.[8] She was adopted at one and a half years of age by Noreen (Nickelson) and Vernon McDormand and renamed Frances Louise McDormand.[8] Her adoptive mother was a nurse and receptionist while her adoptive father was a Disciples of Christ pastor; both were originally from Canada.[9][10] McDormand has said that her biological mother—to whom she has proudly referred, along with herself, as "white trash"—may have been one of the parishioners at Vernon's church.[8][9] She has a sister, Dorothy A. "Dot" McDormand, who is an ordained Disciples of Christ minister and chaplain,[11] as well as a brother, Kenneth, both of whom also were adopted by the McDormands, who had no biological children.

Because McDormand's father specialized in restoring congregations,[9] he frequently moved their family, and they lived in several small towns in Illinois, Georgia, Kentucky, and Tennessee,[12] before settling in Monessen, Pennsylvania, where McDormand graduated from Monessen High School in 1975. She attended Bethany College in West Virginia, earning a Bachelor of Arts degree in theater in 1979. In 1982, she earned a Master of Fine Arts degree from the Yale School of Drama. She was a roommate of actress Holly Hunter while living in New York City.[13]

McDormand's first professional acting role was in Derek Walcott's play In a Fine Castle also known as The Last Carnival, which was funded by the MacArthur Foundation and performed in Trinidad. In 1984, she made her film debut in Blood Simple, the first film by her husband Joel Coen and brother-in-law Ethan Coen. In 1985, McDormand appeared in Sam Raimi's Crimewave, as well as an episode of Hunter.[14] In 1987, she appeared as eccentric friend Dot in Raising Arizona, starring Holly Hunter and Nicolas Cage. In addition to her early film roles, McDormand played Connie Chapman in the fifth season of the television police drama Hill Street Blues, and appeared in a 1986 episode of The Twilight Zone.[15] In 1988, she played Stella Kowalski in a stage production of Tennessee Williams' A Streetcar Named Desire, for which she was nominated for a Tony Award for Best Actress in a Play.[4] McDormand is an associate member of the experimental theater company The Wooster Group. In 2002, "the game and talented" McDormand performed as Oenone in the Wooster Group's production of an "exhilarating dissection" of Racine's tragedy Phèdre entitled To You, the Birdie!, at St. Ann's Warehouse in Brooklyn, New York.[16]

After appearing in several theatrical and television roles during the 1980s, McDormand gradually gained renown and critical acclaim for her dramatic work in film.[17] In 1989, she was nominated for the Academy Award for Best Supporting Actress for Mississippi Burning (1988).[18] Cast alongside Gene Hackman and Willem Dafoe, McDormand was singled out for praise, with Sheila Benson in her review for the Los Angeles Times writing, "Hackman's mastery reaches a peak here, but McDormand soars right with him. And since she is the film's sole voice of morality, it's right that she is so memorable."[19] In 1990, McDormand teamed again with director Sam Raimi for Darkman, in which she co-starred alongside Liam Neeson. That same year, she starred in the political thriller Hidden Agenda, alongside Brian Cox. In 1993, McDormand co-starred in Robert Altman's ensemble film Short Cuts, based on stories by Raymond Carver. The film was critically acclaimed, with the cast winning Best Ensemble at the Venice Film Festival, as well as a Special Ensemble Award at the 51st Golden Globe Awards.

In 1996, McDormand starred as pregnant police Chief Marge Gunderson in Fargo, written and directed by the Coen brothers.[20] She garnered widespread critical acclaim for her performance, and won the Academy Award and Screen Actors Guild Award for Best Actress.[21][22] Critic Roger Ebert called Fargo "one of the best films I've ever seen" and asserted that McDormand "should have a lock on an Academy Award nomination with this performance, which is true in every individual moment, and yet slyly, quietly, over the top in its cumulative effect".[23] In 2003, the character of Marge Gunderson as portrayed by McDormand was ranked the 33rd greatest screen hero by AFI's 100 Years...100 Heroes & Villains.[24] Also in 1996, McDormand played Edward Norton's psychiatrist Dr. Molly Arrington in the legal thriller Primal Fear, and appeared alongside Chris Cooper in the neo-Western mystery film Lone Star. In 1997, McDormand received a Primetime Emmy Award nomination for Outstanding Supporting Actress in a Limited Series or Television Movie for her role as Gus in the television film Hidden in America (1996).[25] That same year, she co-starred alongside Glenn Close in the war drama Paradise Road. In 1998, McDormand played the strict but loving nun Miss Clara Clavel in the family film Madeline. 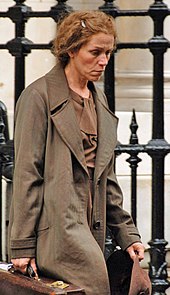 In 2007, McDormand won an Independent Spirit Award for her supporting role in Nicole Holofcener's dark comedy Friends with Money (2006).[30] She also voiced the role of the principal Melanie Upfoot in The Simpsons episode "Girls Just Want to Have Sums", which aired on April 30, 2006. In 2008, McDormand starred in the films Miss Pettigrew Lives for a Day and Burn After Reading, the later earning her a Golden Globe nomination for Best Actress – Motion Picture Comedy or Musical.[27] In 2011, she appeared alongside Sean Penn in This Must Be the Place, and alongside her Burn After Reading co-star John Malkovich in the action movie Transformers: Dark of the Moon, playing the US government's National Intelligence Director. She returned to the stage in the David Lindsay-Abaire play Good People, in a limited engagement on Broadway from February 8, 2011 to May 29, 2011.[31][32] Her performance won her the Tony Award for Best Actress in a Play.[33] In the animated film Madagascar 3: Europe's Most Wanted (2012), McDormand voiced Captain Chantel Dubois and also sang a version of the French song "Non, je ne regrette rien". That same year, she co-starred in Wes Anderson's ensemble film Moonrise Kingdom, and alongside Matt Damon in Promised Land.[34]

McDormand has been married to director Joel Coen since 1984. In 1995, they adopted a son from Paraguay, Pedro McDormand Coen, when he was six months old.[44][45]