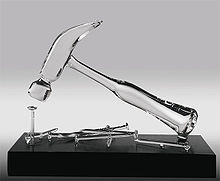 Hammer and Nails (1977) by Hans Godo Frabel. A "glass hammer" is a highly impractical object which an apprentice might be sent to fetch as part of a fool's errand

A fool's errand prank is a type of practical joke where a newcomer to a group, typically in a professional context, is given an impossible or nonsensical task by older or more experienced members of the group. More generally, a fool's errand is a task almost certain to fail.[1]

Many such errands require the victim to travel some distance and request an impossible object by name; the prank will be widely known within the peer group as an in-joke, and the person they ask for the object will play along, often by sending the victim on to make the same request elsewhere.

The errand is an example of a hazing ritual, through which a newcomer gains acceptance into a group.