Florence Pugh (/pjuː/ PEW; born 3 January 1996) is an English actress. Born in Oxford, she made her acting debut in 2014 in the drama film The Falling. Pugh gained recognition in 2016 for her leading role as a violent young bride in the independent drama Lady Macbeth, winning a British Independent Film Award. After starring in the 2018 films King Lear and Outlaw King, she drew praise for her leading role in the 2018 miniseries The Little Drummer Girl. Pugh was nominated for the BAFTA Rising Star Award that same year.

Pugh's international breakthrough came in 2019 with her portrayals of professional wrestler Paige in the biographical sports film Fighting with My Family, a despondent American woman in the horror film Midsommar, and Amy March in the period drama Little Women. For the last, she received nominations for an Academy Award and a BAFTA Award. She was awarded the Trophée Chopard at the 2019 Cannes Film Festival. In 2021, she starred in the Marvel Cinematic Universe superhero film Black Widow as Yelena Belova / Black Widow.

Pugh was born on 3 January 1996 in Oxford.[1][2] The daughter of restaurateur Clinton Pugh and dancer Deborah Pugh,[3][4] she has three siblings: actor and musician Toby Sebastian, actress Arabella Gibbins, and Rafaela "Raffie" Pugh.[5] She suffered from tracheomalacia as a child, which led to frequent hospitalisations. The family relocated to Sotogrande in Spain when Pugh was three years old, hoping the warmer weather would improve her health. They lived there until she was six, at which point they moved back to Oxford.[5][6] Also at six years old, Pugh played Mary in a school nativity play, for which she spoke in a Yorkshire accent.[7] She was privately educated at Wychwood School and St Edward's School, Oxford, but disliked how the schools did not support her acting ambitions.[7] 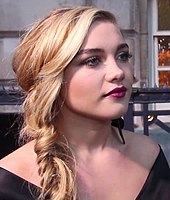 While still studying in sixth form, Pugh made her professional acting debut in the 2014 drama The Falling, playing a precocious teenager opposite Maisie Williams.[7][8] Tara Brady of The Irish Times deemed Pugh "remarkable", while IndieWire's Oliver Lyttelton called her "striking".[9][10] In the same year, the actress was nominated for Best British Newcomer at the BFI London Film Festival as well as for Young British / Irish Performer of the Year by the London Film Critics' Circle.[11][12] She was cast to portray a singer-songwriter in the dramedy pilot Studio City, co-starring Eric McCormack as the character's father, the following year.[13] The pilot was not picked up to series.[14]

In 2016, Pugh starred in the independent drama Lady Macbeth, a film based on the novella Lady Macbeth of the Mtsensk District by Nikolai Leskov, and appeared in the first series of the ITV detective series Marcella.[15] In the former, she played Katherine, an unhappily married teenage bride who grows violent. Pugh attributed her attraction to the part to her partiality for characters whose "motivations are confusing or at least interesting".[16] The role earned the actress acclaim.[16] Reviewing the film for Variety, Guy Lodge commended her portrayal of the character's "complex, under-the-skin transformation".[17] She won the BIFA Award for Best Performance by an Actress in a British Independent Film for the role.[18]

In 2018, Pugh garnered a nomination for the BAFTA Rising Star Award at the 71st British Academy Film Awards.[19] She then played Cordelia to Anthony Hopkins' titular King Lear in Richard Eyre's television film King Lear and appeared in the short film Leading Lady Parts in support of the Time's Up initiative.[7][20] Later that year, Pugh portrayed Elizabeth de Burgh in the Netflix historical film Outlaw King, co-starring Chris Pine as Robert the Bruce. Charles Bramesco of The Guardian found her to be "excellent despite her thankless role".[21] She next starred in a six-part miniseries adaptation of John le Carré's spy novel The Little Drummer Girl, in which she played an actress who becomes embroiled in an espionage plot in the 1970s.[22] Her performance was met with praise.[23] While divided on the series overall, Richard Lawson of Vanity Fair credited Pugh for being "terrific throughout" and added that she "smartly mixes earthiness with sophistication, wisdom with naïveté."[24] 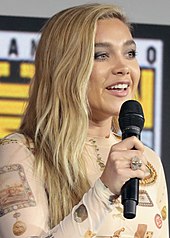 Pugh starred in three major films in 2019, during which she was recognised as having experienced an international breakthrough.[25][26] She first starred as professional wrestler Paige in Fighting with My Family, a comedy-drama about Paige's career. The film premiered at the 2019 Sundance Film Festival to positive reviews.[27] Geoffrey Macnab of The Independent credited the actress for being "completely convincing as the wrestler", adding that she had shown "the same defiance, scruffy glamour and self-deprecating humour as the real life [...] Paige."[28] Pugh next headlined Ari Aster's horror film Midsommar, which chronicles an American couple, played by her and Jack Reynor, who travel to Sweden and encounter a cult.[29] Critics complimented Pugh's portrayal of the desolate Dani Ardor, with David Edelstein of Vulture describing it as "amazingly vivid".[30][31]

In her final film release of the year, Pugh played Amy March, a fickle artist, in Little Women, a period drama film adaptation of Louisa May Alcott's novel of the same name directed by Greta Gerwig. Pugh did not participate in rehearsals for the film, as she was filming Midsommar, which she believed proved conducive to her character's journey.[32] The film received critical acclaim and grossed $209 million.[33][34] In his review, David Rooney of The Hollywood Reporter praised the "disarming grace, humor and a willful streak that grows almost imperceptibly into wisdom" with which Pugh managed the "tricky contradictions" of the part.[35] Pugh earned nominations for the Academy Award for Best Supporting Actress and the BAFTA Award for Best Actress in a Supporting Role for her performance.[33][36]

Pugh portrayed Yelena Belova, a spy, in the Marvel Cinematic Universe superhero film Black Widow.[37] Released in July 2021, the film garnered positive reviews from critics, who highlighted the actress's distinctive performance.[38][39] She will reprise the role in the Disney+ superhero series Hawkeye and star in Don't Worry Darling, a psychological thriller film set in California in the 1950s, directed by Olivia Wilde.[40][41] Pugh is set to appear in the films Dolly and A Good Person as well as film adaptations of the novels The Maid by Nita Prose and The Wonder by Emma Donoghue.[42][43][44][45]

Pugh was included on the entertainment category of Forbes magazine's annual 30 Under 30 list, which recognises the 30 most influential people in Europe under age 30, in 2019.[46] Time magazine placed her on the artists category of its 100 Next list, which highlights rising stars and emerging leaders in their fields, in 2021.[47]

Pugh is in a relationship with American actor and filmmaker Zach Braff.[1] He directed her in his 2019 short film In the Time it Takes to Get There.[48] They live together in Los Angeles.[49]

From 2013 to 2016, Pugh performed cover songs under the name Flossie Rose on YouTube.[50] In 2020, she partook in the series Acting for a Cause for a live reading of Kenneth Lonergan's play This Is Our Youth to help raise funds for the Entertainment Industry Foundation, a nonprofit organisation, during the COVID-19 pandemic.[51] Pugh was featured on her brother's song "Midnight", released in May 2021.[52]

Pugh has been nominated for an Academy Award as well as two BAFTA Awards.[33][57] She garnered an Academy Award nomination for Best Supporting Actress and a BAFTA Award nomination for Best Actress in a Supporting Role, both for her work in Little Women, as well as a BAFTA Rising Star Award nomination. Her performance in Lady Macbeth earned her a British Independent Film Award.[18] She was nominated for a Gotham Award in the Best Actress category for her role in Midsommar.[58] At the 2019 Cannes Film Festival, Pugh was awarded the Trophée Chopard, which is given by a jury of professionals to young actors to recognise and encourage their careers.[59]