Fate: The Winx Saga is a teen drama series based on the Nickelodeon animated series Winx Club,[3][4] which was created by Iginio Straffi. It is produced by Archery Pictures in association with Rainbow, a studio co-owned by Iginio Straffi and ViacomCBS.[2] Fate was developed by Brian Young, who also acts as the showrunner and executive producer.

Iginio Straffi first proposed a live-action version of Winx Club in 2011, after Viacom (owner of Nickelodeon) became a co-owner of his studio and started financing his projects.[5] Before approving production on the series, Straffi gained experience with live-action television shows, working as a producer for Nickelodeon's Club 57.[6] Principal photography for Fate eventually began in September 2019 in Ireland.

Early in production, Nickelodeon's American crew members from the cartoon (including Bloom's voice actress, Molly Quinn)[7] met with the Fate production team and reviewed the pilot script.[7] Rainbow's Joanne Lee also oversaw the show as an executive producer. Apart from them, the crew behind Fate is entirely new to the Winx franchise, and the writers were recruited from teen dramas like The Vampire Diaries.[8]

The series features an ensemble cast based on the characters of the animated show, with Abigail Cowen in the lead role of Bloom. The six-episode first season debuted on Netflix on 22 January 2021[9] to mixed reviews.

Bloom, a fairy with fire powers, enrolls at a magical boarding school in the Otherworld called Alfea College. There, she shares a suite with Stella (a light fairy), Aisha (a water fairy), Terra (an earth fairy), and Musa (a mind fairy). With the help of her four new friends, Bloom starts to learn more about her past. Meanwhile, ancient creatures called the Burned Ones return to the Otherworld and threaten everyone at Alfea. 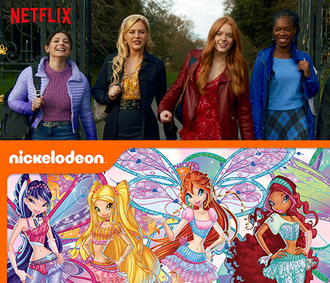 Comparison of Musa, Stella, Bloom, and Aisha in Fate (top) and in press artwork for the animated show (bottom)

The idea for a live-action adaptation of Winx Club dates back to 2011. Winx Club creator Iginio Straffi first proposed a live version in May 2011, several months after Viacom (owner of Nickelodeon) became a co-owner of his studio (Rainbow) and started financing his projects.[5][12] At the Ischia Global Fest in 2013, Straffi stated that he was still planning a production "with the Winx in flesh and blood, played by real actors. Sooner or later it will be done."[13] Straffi had only worked on animated productions at the time, so he transitioned his focus to live action, working as a producer for Nickelodeon's live-action show Club 57.[6]

In February 2016, Iginio Straffi mentioned that a live-action movie concept was being considered in partnership with Hollywood Gang Productions, but the project never moved on.[14] In March 2018, the idea was revisited as a television series after Netflix ordered a young-adult version for its streaming service.[15] Straffi was involved in the early planning stages, and he declined a suggestion from Netflix for the male characters to be given larger roles.[16]

After a pilot episode was scripted, Nickelodeon's American crew members from the cartoon (including Bloom's voice actress, Molly Quinn)[7] travelled to meet with the Fate production team and review the script.[7] Francesco Artibani, one of the Italian writers of the animated version, was also brought in to read the storyline.[17] Rainbow's Joanne Lee oversaw the first season as an executive producer.

The writers behind Fate are entirely new to the Winx franchise, and they were recruited from teen dramas like The Vampire Diaries.[8] Brian Young, who worked on seven seasons of The Vampire Diaries,[18] is the creator and showrunner of Fate: The Winx Saga.[19] According to an interview with The Guardian, Young chose to "ditch the look" of the cartoon Winx fairies, who have big eyes and sparkling outfits. He said, "Look, again, I'm a massive manga anime fan... but nobody looks like that."[8] Some episodes of the first season were directed by Lisa James Larsson and Hannah Quinn.[20][3][19]

Review aggregator Rotten Tomatoes reported an approval rating of 35% based on 17 reviews, with an average rating of 5.33/10. The website's critical consensus reads, "Flat, flimsy, and forgettable, Fate: The Winx Saga is a fantastical flop that fails to capture the magic of its source material."[28]

Caroline Framke of Variety criticized the series for relying too much on clichés and wrote that "while adapted from an animated show about friends that was largely targeted at pre-teens, it takes a page out of the Riverdale book by giving everything an ominous sheen of sexy intrigue."[29] Joel Keller from Decider urged the audience to skip the series stating that "while there's nothing inherently terrible about Fate: The Winx Saga, there's nothing about it that stands out. Also, do we need yet another dark and gritty remake of a beloved kids' series?".[30] Deirdre Molumby from Entertainment.ie praised the cast but criticized the plot and the poor CGI quality.[31] On the contrary, Petrana Radulovic of Polygon wrote that "Fate: The Winx Saga does create a compelling, nuanced plot. The worldbuilding is exciting, offering a spin on the animated series' world of fairies and non-magical, sword-wielding Specialists."[32] Melissa Camacho of Common Sense Media criticized the diversity of the cast along with the teen angst shown in the series, but wrote that "Fate: The Winx Saga offers a story world that is easy to escape into, and easy to get caught up in, if you're looking for a fantastical universe to explore."[33] Millie Mae Healy of The Harvard Crimson heavily criticized the series for its deviation from the source material and stated that it "goes out of its way to be less inclusive and compelling than the source material was" and called it "a damn shame".[34] Deyshna Pai of the UCSD Guardian gave the series a "C+" and criticized its pacing and character development.[35]

In response to the backlash, Abigail Cowen said she was not involved in the casting but hoped that Flora would be introduced in Season 2 saying “I do think diversity both in front of and behind the camera is vital and much-needed throughout the industry and internationally. So I think it's important that we are having these conversations.” Brian Young has said Terra is the cousin of Flora, leaving Flora's inclusion in the show a possibility.[42] Elisha Applebaum, who plays Musa also addressed the controversy. "It's really sad to see that fans were upset with the casting. I wasn't involved in the casting but I hope that what they've seen and how I've portrayed Musa was to their liking," Elisha told Digital Spy.[43]

On February 2, 2021, a novelization of the first season, titled The Fairies' Path, was released. It features bonus scenes and character backstories not seen on the show. It was written by Ava Corrigan.[44]