This article is about the Apple product. For other meanings, see FaceTime (disambiguation).

FaceTime is a proprietary videotelephony product developed by Apple Inc. FaceTime is available on supported iOS mobile devices running iOS 4 and later and Mac computers that run Mac OS X 10.6.6 and later. FaceTime supports any iOS device with a forward-facing camera and any Mac computer equipped with a FaceTime Camera. FaceTime Audio, an audio-only version, is available on any iOS device that supports iOS 7 or newer, and any Mac with a forward-facing camera running Mac OS X 10.9.2 and later. FaceTime is included for free in iOS and in macOS from Mac OS X Lion (10.7) onwards.[1]

Apple bought the "FaceTime" name from FaceTime Communications, which changed its name to Actiance in January 2011.[2][3] On June 7, 2010, Apple CEO Steve Jobs announced FaceTime in conjunction with the iPhone 4 in a keynote speech at the 2010 Apple Worldwide Developers Conference. Support for the fourth generation iPod Touch (the first model of iPod Touch equipped with cameras) was announced in conjunction with the device's release on September 8, 2010. On March 2, 2011, FaceTime support was announced for the newly introduced iPad 2, which had forward- and rear-facing cameras.

On February 24, 2011, FaceTime left beta and was listed in the Mac App Store for US$0.99. Apple claims that it intended to provide the application free of charge, however, a provision of the Sarbanes–Oxley Act (2002) bars companies from providing an unadvertised new feature of an already-sold product without enduring "onerous accounting measures".[4] As of December 2017[update], the US$0.99 beta is still available for download from Apple.[5] FaceTime is included for free in macOS from Mac OS X Lion (10.7) onwards and iOS.[1]

AT&T allowed customers to use FaceTime as long as they were tiered, but blocked the application from working for customers with unlimited data plans. They were brought before the Federal Communications Commission (FCC) for net neutrality violations.[6]

In May 2011, it was found that FaceTime would work seamlessly over 3G on all iPhone, iPad, and iPod Touch models that supported it. Even though FaceTime worked only over 3G at that time, it now supports 4G LTE calls on networks all over the world, availability being limited to operators' GSM plans.[7]

In 2018, Apple added group video and audio support to FaceTime which can support up to 32 people in iOS 12 and macOS Mojave.[8]

On June 7, 2021, during Apple's WWDC Keynote, it was announced that FaceTime will be made available for Android and Windows users via the web.[9] A new feature called SharePlay was announced at the same event. It will let users on all platforms, including Android and Windows, share music and video with people in the call. Apple stated that the feature uses an API that can be enabled on any media service and SharePlay is slated to support Hulu, HBO Max, TikTok, Twitch, Apple TV+ and several other media sources.[10] 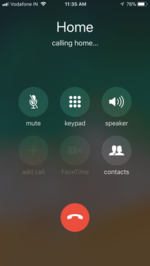 The iPhone's screen when a call is in progress, showing the FaceTime button (grayed out, middle of bottom row).

FaceTime works by establishing a connection between two supported devices. Most Apple devices (such as iPhones, iPads and Macs) introduced after 2011 support FaceTime. FaceTime is currently incompatible with non-Apple devices or any other video calling services. Mac models introduced in 2011 have high-definition video FaceTime, which devices use automatically when both ends have a FaceTime HD camera.

At launch, unlike Mac OS X's iChat, FaceTime did not support group conferencing. The application allowed a one-on-one video chat—only two people could talk at once. If a second user called and the user answered, the video chat with the previous user would end and a new video session began with the second caller. In iPhone, if a phone call was pending and the user attempts to answer, the video call ends and the phone call began with the next user. Support for group video conferencing was added with the release of iOS 12, allowing up to 32 people to participate in a video call simultaneously.

Incoming notifications on iOS devices are shown during a FaceTime call, but if they are opened, the video will be temporarily paused until the user is back in the FaceTime app. 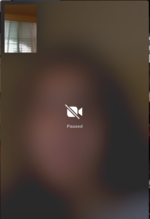 On the iPhone, a user can activate FaceTime during a phone call by pressing the FaceTime button or initiated FaceTime from their call history or the Contacts application. iOS 7 and newer also provide a separate FaceTime app, as there always has been on Apple's non-telephony devices: iPad, iPod Touch, and Mac.

Until the release of iOS 6, FaceTime required a WiFi connection to work. From iOS 6 onwards, FaceTime for the iPhone and iPad has supported FaceTime calls over cellular networks (3G or LTE) provided the carrier enabled it, which by mid-2013 virtually all carriers worldwide have allowed. FaceTime Audio uses about three megabytes of data for every five minutes of conversation, with FaceTime Video using significantly more.[11] Cellular talk time/minutes are not used after switching from a voice call to a FaceTime call.

FaceTime calls can be placed from supported devices to any phone number or email address that is registered to the FaceTime service. A single email address can be registered to multiple devices and a call placed to that address rings all devices simultaneously.

The FaceTime protocol is based on numerous open industry standards[12] although it is not interoperable with other videotelephony systems:

Upon the launch of the iPhone 4, Jobs stated that Apple would immediately start working with standards bodies to make the FaceTime protocol an "open industry standard". While the protocols are open standards, Apple's FaceTime service requires a client-side certificate.[13]

FaceTime calls are protected by end-to-end encryption so that only the sender and receiver can access them. Apple cannot decrypt this data.[14][non-primary source needed]

A new audio-only version of FaceTime, named FaceTime Audio, was announced during the annual Apple Worldwide Developers Conference (WWDC) keynote speech on June 10, 2013, and released with iOS 7 on September 18, 2013. As an audio-only version of FaceTime, it effectively makes the protocol into a voice over Internet Protocol (VoIP), that competes with other mainstream providers in the field, including Skype (Microsoft).

Based on the same AAC-LD audio protocol, the service provides high-quality audio. The iOS 7 betas limited FaceTime Audio to calls placed on a Wi-Fi network (the same original limitation of the video version of FaceTime), but the final release has removed that restriction to allow it to work over 3G and LTE data connections, as is the case with most carriers and plans with regard to FaceTime with video. Like the video version, FaceTime Audio is currently only available between Apple devices on iOS 7 and later. FaceTime streaming over cellular data is unavailable for the iPhone 4 and the iPad 2.[16]

As of June 2010[update], FaceTime is not enabled on devices bought in the United Arab Emirates possibly due to regulations in this country that restrict IP-based communications. In addition, on devices bought in China only FaceTime Audio is disabled, while FaceTime Video is available.[17] Devices bought outside these countries support both video and audio versions of FaceTime.[18] Although Egypt, Jordan, Qatar and Kuwait originally disabled FaceTime on the iPhone 4, they later re-enabled the feature through a carrier update for existing phone owners, and made it pre-enabled on any newly purchased iPhone. In March 2018, FaceTime was made available for iPhones in Saudi Arabia upon updating to iOS 11.3, and in August 2019, FaceTime was made available for iPhones in Pakistan upon updating to iOS 12.4.

As of April 16, 2014, FaceTime ceased working on earlier versions of iOS which had previously supported it (iOS 4 and later), due to the client-side certificate used to authenticate a genuine Apple device with FaceTime servers (amongst other uses[19]) expiring on that date. Apple chose not to release an update to this certificate for all devices for which a newer major iOS version (with a new, valid certificate) was available. Apple did release a minor update, to the certificate only, for all OS X versions which could run FaceTime, and also for the 4th generation iPod Touch, the only iOS device which could run FaceTime but could not run the then-latest iOS 7. The result of this policy was that almost all iOS users had to update the iOS version on their devices if they wished to continue using FaceTime.[20]

On January 28, 2019, a bug was discovered in the FaceTime app that allowed users to eavesdrop on other users without their knowledge through an exploit.[21] It was later discovered the video feed could be enabled without the other users' acceptance.[22] Apple said in a statement that it would release a fix for the exploit shortly, disabling Group FaceTime for the time being.[23] The bug was named "FacePalm" by security researchers,[24] and affects iOS devices running Facetime on iOS 12.1 or Mac computers running MacOS 10.14.1 Mojave. On February 7, Apple fixed the FaceTime vulnerabilities in iOS 12.1.4 and a Supplemental Update for macOS Mojave 10.14.3.[25]

Although the bug gained international attention on January 28, 2019, the bug was found by a high school student in Arizona. He and his mother tried for more than a week to warn Apple about the problem through Facebook and Twitter after discovering the bug on January 20, without receiving answers.[26] On January 25, 2019, they posted a video to YouTube demonstrating the bug.[27]