Fabrice Ndala Muamba (born 6 April 1988) is an English retired professional footballer and coach who played for Arsenal, Birmingham City and Bolton Wanderers as a central midfielder. Born in Zaire, Muamba moved to England at the age of 11 and subsequently played for England up to under-21 level.

Muamba began his career in 2002, joining Arsenal's youth academy. After three years, he turned professional in 2005. He made his debut for Arsenal in the League Cup, but played only one other professional match for the club. Following a loan spell with Birmingham City, he made the move permanent in 2007. He stayed with Birmingham City for one additional year, and left after making more than 70 appearances and making his England under-21 debut while with the team. He joined Bolton Wanderers in 2008.

In March 2012, Muamba suffered a cardiac arrest during a televised FA Cup match between Bolton and Tottenham Hotspur, from which he recovered despite his heart having stopped for 78 minutes. Following medical advice, he announced his retirement from professional football in August 2012. As of September 2018, he is a youth coach at Rochdale.

Muamba was born in Kinshasa, Zaire (now the Democratic Republic of the Congo).[1] His father fled the country in 1994 because of his political views and arrived in the United Kingdom seeking asylum. In 1999, he was granted indefinite leave to remain, at which time he was joined by the rest of the family.[3] They settled in east London, where Muamba attended Kelmscott School in Walthamstow.[4] Despite having arrived in Britain aged 11, unable to speak English,[5] he went on to achieve 10 GCSEs and A-levels in English, French and mathematics.[6]

Muamba was associated with Arsenal's youth system as a schoolboy from 2002, joining their Academy as a first-year scholar in August 2004. He signed his first professional contract in October 2005 and made his first team debut on 25 October in a League Cup tie against Sunderland, in front of a 47,000 crowd at the Stadium of Light.[7] He made his second and final first team appearance for Arsenal in the next round, against Reading, where he contributed to a 3–0 victory.[8]

In August 2006, Muamba joined Championship club Birmingham City on a season-long loan.[9] After a slow start, his energetic style of play, which has been likened to that of his hero Patrick Vieira,[7] established him as a regular starter in central midfield. The fans were equally impressed, voting him their Young Player of the Season.[10]

On 11 May 2007 Muamba made his move to Birmingham City permanent,[11] signing a three-year contract for a fee reported by the club of £4 million.[12] He scored his first goal for the club, a close-range volley from a corner, on 12 March 2008 in a 4–2 defeat at Portsmouth.[13] He made 37 appearances as Birmingham were relegated from the Premier League after one season back in the top tier.

Muamba warming up before a Bolton Wanderers game in 2011

Muamba scored on the opening day of the 2011–12 league season, in Bolton's 4–0 away win against Queens Park Rangers.[18] He then scored his first ever goal in the League Cup, against his old club Arsenal in a 2–1 defeat.[19]

On 17 March 2012, Muamba suffered a cardiac arrest and collapsed during the first half of an FA Cup quarter-final match between Bolton and Tottenham Hotspur at White Hart Lane. After receiving lengthy attention on the pitch from medical personnel – including both Bolton club doctor Jonathan Tobin and Tottenham club doctor Shabaaz Mughal as well as consultant cardiologist and Tottenham fan Andrew Deaner, who was at the game and persuaded stewards to allow him onto the pitch – Muamba was taken to the specialist coronary care unit at the London Chest Hospital.[20] Bolton manager Owen Coyle and club captain Kevin Davies accompanied Muamba in the ambulance.[21] The match was abandoned by referee Howard Webb, and Bolton's next game, against Aston Villa, due to be played three days later, was postponed at the club's request.[22] Aston Villa raised no objection. 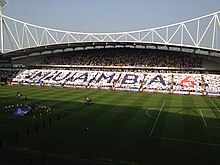 Bolton fans show their support for Muamba at their first match after the incident, against Blackburn Rovers on 24 March 2012.[23]

Arsenal fans showing their support for Muamba shortly after his cardiac arrest.

Bolton's club doctor later confirmed that Muamba had received numerous defibrillator shocks both on the pitch and in the ambulance, but his heart had stopped for 78 minutes.[24] The player was initially kept under anaesthesia in intensive care.[25] By 19 March, his heart was beating without medication and he was able to move his limbs.[26] Later that day his condition was described as "serious" rather than "critical" and he was able to recognise family members and respond appropriately to questions.[27] By 21 March, his consultant suggested that Muamba's progress had "exceeded our expectations" and that although he faced a "lengthy recovery period", "normal life is within the spectrum of possibility".[24]

Two weeks after the incident, a photograph was released of Muamba sitting up in his hospital bed and smiling.[28] He was discharged from hospital on 16 April, having been fitted with an implantable cardioverter-defibrillator (ICD).[29] Muamba attended Bolton's home match against Tottenham Hotspur on 2 May, where he expressed his gratitude for the support he had received.[30]

On 15 August 2012, Bolton announced that Muamba had retired from professional football, based on the recommendation of his medical team. Muamba said:[31]

Since suffering my heart attack and being discharged from hospital, I have remained utterly positive in the belief I could one day resume my playing career and play for Bolton Wanderers once again. As part of my on-going recovery, last week I travelled to Belgium to seek further medical advice from a leading cardiologist. But the news I received was obviously not what I had hoped it would be and it means I am now announcing my retirement from professional football. Football has been my life since I was a teenage boy and it has given me so many opportunities. Above all else, I love the game and count myself very lucky to have been able to play at the highest level. While the news is devastating, I have much to be thankful for. I thank God that I am alive and I pay tribute once again to the members of the medical team who never gave up on me. I would also like to thank everyone who has supported me throughout my career, and the Bolton fans who have been incredible. I am blessed to have the support of my family and friends at this time.

On Thursday 8 November 2012, Muamba returned to White Hart Lane for the first time since his cardiac arrest and received a standing ovation from the crowd.[32]

In 2021, when he saw Christian Eriksen also suffer a sudden cardiac arrest and collapse on the pitch in the 43rd minute of Denmark's opening Euro 2020 group stage game against Finland at the Parken Stadion in Copenhagen, he told BBC Radio Five Live, "Everybody worried that I was on the floor - it's the people who are close to the person that need considering...What happened to Christian brought back stuff that I have put down in me, this emotion that is down there. The most important thing is that he's made that recovery. That is the most important news. I hope things turn out to be OK for him. I hope he will come through."[33][34]

Following his retirement from the game, Muamba was part of ITV's coverage of the 2013 Africa Cup of Nations.[35] He was also a co-commentator alongside Derek Rae on BT Sport's coverage of the African World Cup qualification third round play-offs.

Muamba studied for a BA in sports journalism at Staffordshire University; as part of his course he went on work placement at BBC North West Tonight.[36] In July 2015, he graduated with honours.[37]

In March 2015, Muamba took some coaching sessions at Liverpool's academy.[38] In September 2018, it was revealed that Muamba is coaching the under-16 side at Rochdale while completing his coaching badges.[39]

As a naturalised British citizen, Muamba was eligible to play for any of the Home Nations in which he had received three years of full-time education before the age of 18 or lived in for five years. In Muamba's case, that was just England, whom he represented at all youth levels,[40] and captained the U-19 team.[5] He received his first call-up for England U21 for the friendly against Romania U-21 on 21 August 2007 at Ashton Gate, Bristol,[41] and made his debut as a second-half substitute.[42]

Muamba had also been called up to the DR Congo squad in May 2007, but declined so as to remain eligible for England.[43]

Muamba met Shauna Magunda while he was a Birmingham City player and she was studying for a master's degree at Birmingham City University. They became engaged on 14 February 2012,[6][44] married at Peckforton Castle, Cheshire, on 21 October 2012,[45] and, as of June 2021[update], have four children.[46] Muamba has been described as "deeply religious",[47] and stated he would have sought a career in accountancy had he not become a professional footballer.[48]

In July 2012, the University of Bolton awarded an honorary doctorate to Muamba, which he accepted on behalf of those involved in saving his life.[49] He took part in the 2012 Christmas Special edition of the BBC programme Strictly Come Dancing.[50]