Evelyn Francis McHale (September 20, 1923 – May 1, 1947)[1] was an American bookkeeper who took her own life by jumping from the 86th-floor observation deck of the Empire State Building. A photograph taken four minutes after her death by photography student Robert Wiles subsequently gained iconic status, being referred to as "the most beautiful suicide".[2][3]

Evelyn McHale was born in Berkeley, California,[4] one of nine children born to Helen and Vincent McHale. Her father was a bank examiner who relocated to Washington, D.C. in 1930. Her mother suffered from undiagnosed and untreated depression. This led to a challenging marriage, and ultimately a divorce.[5] Vincent gained custody of all children and moved to Tuckahoe, New York.

After graduating from high school, McHale joined the Women's Army Corps and was stationed in Jefferson City, Missouri. She later moved to Baldwin, New York, and was employed as a bookkeeper at the Kitab Engraving Company on Pearl Street. She met her fiance Barry Rhodes, a college student discharged from the United States Army Air Force.[6][7]

On April 30, 1947, McHale took a train from New York to Easton, Pennsylvania to visit Rhodes. The next day, after leaving Rhodes' residence, she returned to New York City and went to the Empire State Building where she jumped from the 86th-floor observatory, landing on top of a parked car. A security guard was reportedly standing approximately 10 feet (3.0 m) from her just before she jumped.

Rhodes did not notice any indication of suicidal thoughts before McHale left. Detective Frank Murray found her suicide note in a black pocketbook next to her neatly folded cloth coat over the observation deck wall. The note read:[6][8]

I don't want anyone in or out of my family to see any part of me. Could you destroy my body by cremation? I beg of you and my family – don't have any service for me or remembrance for me. My fiance asked me to marry him in June. I don't think I would make a good wife for anybody. He is much better off without me. Tell my father, I have too many of my mother's tendencies.

Her body was identified by her sister, Helen Brenner. In accordance with her wishes, McHale was cremated with no memorial, service or grave.[6]

Barry Rhodes became an engineer before moving south. He died unmarried in Melbourne, Florida on October 9, 2007.[5] 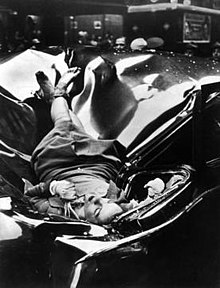 The photo of her body, taken by Robert Wiles, has been compared to the photograph by Malcolm Wilde Browne of the self-immolation of Vietnamese Buddhist monk Thích Quảng Đức, who burned himself alive at a busy Saigon road intersection on June 11, 1963; both are widely regarded as being among the most iconic suicide photographs. Ben Cosgrove of Time praised the photo as "technically rich, visually compelling and ... downright beautiful", describing her body as "resting, or napping, rather than ... dead" and appearing as if she is "daydreaming of her beau".[2][9]

The photo has become well-known due to the unusually intact appearance of her body following the suicide. Her face remains seemingly unharmed with makeup still remaining, and she seems to have a calm, pleasant expression. It is considered likely that McHale hit the car feet-first, causing her shoes to fly off and stockings to shred upon impact, leaving her feet bare and in considerably worse condition than the rest of her body.[citation needed]

Andy Warhol used Wiles' photo in one of his prints entitled Suicide (Fallen Body).[10] Her picture was also used on the cover of Saccharine Trust's album Surviving You, Always, released in 1984 by SST Records.

David Bowie's 1993 video for the single "Jump They Say"[11] and Radiohead's 1995 music video for the single "Street Spirit (Fade Out)" both include a recreation of the image, with Bowie and Thom Yorke respectively splayed atop a smashed car. The cover of the 1995 album Gilt by the Tucson band Machines of Loving Grace uses a color photo that recreates the original image, while that of the 2009 Pearl Jam album Backspacer features an artist rendition of the iconic photograph in the bottom right corner. The photograph is referenced in the movie Stranger than Fiction (2006 film) by the character Karen Eiffel. Parenthetical Girls' 2013 release Privilege (Abridged) opens with the track "Evelyn McHale". Reference was also made to the shot at the start of Taylor Swift's "Bad Blood" music video, released in 2015.[12] English rockabilly band Carlos & The Bandidos released a 2018 single on Migraine Records called The Most Beautiful Suicide (written by Gary Day), with a stylised version of the photograph as its cover.