Ecuadorian footballer (born 1989)
In this Spanish name, the first or paternal surname is Valencia and the second or maternal family name is Lastra.

He previously played for Emelec in Ecuador, where he won the 2013 Ecuadorian Serie A and was awarded the Copa Sudamericana Golden Boot in 2013. Valencia also played for Pachuca in Mexico, being awarded the Liga MX Golden Boot in the 2014 Clausura tournament. He joined English club West Ham United for an estimated £12 million in July 2014. In August 2016, Valencia went out on loan to Everton for the season, before being sold to Mexican club Tigres UANL in July 2017. At Tigres, he won Liga MX's 2017 Apertura and 2019 Clausura tournaments, and finished runner-up in the 2019 CONCACAF Champions League, winning the latter competition's Golden Boot. In August 2020, Valencia signed for Fenerbahçe in Turkey.

Valencia came to Guayaquil to trial for Emelec in 2008 from Caribe Junior's youth system, the same team where Ecuador star Antonio Valencia played in his early years.[5] In 2008, he was transferred to Emelec.[5] From 2008 to early 2010 he received no opportunities in the first team, but with the arrival of the Argentinian coach Jorge Sampaoli, Valencia started to receive playtime opportunities.[5] Emelec were runners-up to champions LDU Quito, losing 2–1 on aggregate score.[6]

Valencia scored nine league goals in 30 league matches in 2011.[7] In November 2012, he scored five goals in five separate matches against El Nacional, LDU Loja, Técnico Universitario, and twice against Manta in both home and away matches, winning four of the five matches, only drawing against LDU Loja.[7] This brought his goal tally to 13 goals scored in 40 league matches played, his best season yet, but for a third season in a row, the team was runner-up to league champions and club rivals Barcelona SC.[7]

On 7 August 2013, Valencia scored his first career hat-trick against Peruvian side Sport Huancayo, in a 4–0 2013 Copa Sudamericana first round match.[7][8] He finished the season as league champions with Emelec, the club's first since 2002.[9]

After numerous rumours involving the interest of Liga MX side Pachuca for Valencia, both parties came to terms and agreed on a transfer.[10]

On 18 January 2014, Valencia scored his first goal in a 2–1 victory against Tijuana.[11] The following week he scored two goals to in Pachuca's first away win league match against league champions Club León.[12] He finished the regular season as the top goal-scorer with 12 goals, scoring various braces for Pachuca. Valencia scored his first hat-trick against UNAM in a 2–4 away win to advance in the 2014 Liga MX Clausura play-offs.[13] 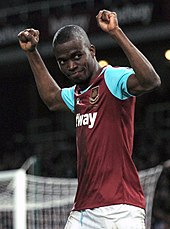 On 29 July 2014, Premier League club West Ham United completed the transfer of Valencia, on a five-year contract for a fee estimated at £12 million.[14] He later confirmed that he knew little about West Ham before signing and that he mainly knew of them having watched hooligan films such as the 2005 release of Green Street starring Elijah Wood.[15] Valencia made his West Ham debut on 16 August 2014 in a 1–0 home defeat to Tottenham Hotspur coming on as an 81st-minute substitute for Carlton Cole.[16] On 27 August, he had his penalty saved by Mark Howard as West Ham were knocked out at home in the second round of the League Cup by Sheffield United.[17] Valencia's first goal for West Ham came in his full league debut, against Hull City on 15 September 2014, in a 2–2 draw.[18] The 25-yard (23 m; 75 ft) strike, timed at 61 miles per hour (98 km/h), was described by journalist Henry Winter of The Daily Telegraph as an "exceptional goal".[19] Valencia went on to score two more goals for West Ham in the following weeks, including a header in a 3–1 away win at Burnley,[20] and a goal in a 2–2 draw with Stoke City.[21]

His first match of his second season was on 30 July 2015 in the UEFA Europa League third qualifying round first leg at home against Astra Giurgiu; he headed West Ham into the lead but was one of two players substituted through injury in the first half as the team eventually drew 2–2.[22] It was confirmed that he had suffered "significant" injuries to his right knee and ankle,[23] and was ruled out for twelve weeks.[24] Valencia scored his first league goals of the 2015–16 season with two in a 3–1 comeback win against AFC Bournemouth on 12 January 2016, including a powerfully hit free-kick.[25]

On 31 August 2016, Valencia signed for Everton on a season-long loan, with the option of a permanent £14.5 million move in the summer of 2017.[26] Valencia scored his first league goal for Everton when he fired home from close range in a 3–0 win against Southampton on 2 January 2017.[27]

On 28 August 2020, Valencia signed for Süper Lig club Fenerbahçe on a free transfer.[29] 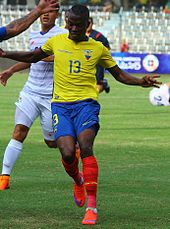 Valencia playing for Ecuador in 2015

After playing for the nation's under-22 team at the 2011 Pan American Games, Valencia made his debut for Ecuador on 12 February 2012 in a friendly against Honduras.[4]

Valencia initially began his career as a winger, but was converted to play as a striker by Emelec coach Gustavo Quinteros. Reinaldo Rueda started experimenting with Valencia as a striker after the untimely death of Christian Benítez.[30] After making three appearances in the 2014 FIFA World Cup qualification campaign, he scored his first international goal in a 2–2 draw against Honduras on 19 November 2013. He continued his good form in 2014, scoring in three of Ecuador's four pre-tournament friendlies. On 5 March, he scored, assisted a goal and won a penalty kick as La Tri came from 3–0 down to defeat Australia 4–3.[4] He then scored the team's only goal in a 3–1 loss against Mexico, and gave them an early lead in a 2–2 draw with England in Miami.[31]

In June 2014, Valencia was named in Ecuador's squad for the 2014 FIFA World Cup.[32] On 15 June, he made his FIFA World Cup debut in the team's opening match against Switzerland at the Estádio Nacional Mané Garrincha in Brasília, opening the scoring with a header in a 2–1 defeat.[33] In Ecuador's second match, Valencia scored both goals to defeat Honduras 2–1 in Curitiba.[34] He continued his good form after the FIFA World Cup, scoring the third goal of a 4–0 victory against Bolivia. On 10 October, Valencia again netted for Ecuador in the 88th minute over the United States, which ended in a 1–1 draw. His swerving, right-footed shot took a right turn on its way towards the goal, making it impossible for goalkeeper Brad Guzan to stop.[35]

In Ecuador's second group match at the 2015 Copa América in Chile, Valencia successfully converted a penalty to Bolivia, but the kick had to be taken again due to an opponent's infringement; the re-take was saved by Romel Quiñónez. He later scored from close range, but Ecuador lost 2–3 nonetheless.[36] Four days later in Rancagua, Valencia set up Miller Bolaños' opener and scored Ecuador's second goal as they won 2–1 against Mexico, eliminating the opponents.[37]

Valencia scored both of Ecuador's goals on 20 November in their 2–0 win over tournament hosts Qatar in the opening match at the 2022 World Cup.[39] In doing so, he became Ecuador's record goalscorer at World Cup final tournaments, with five goals.[40] On 25 November 2022, Valencia scored in a 1–1 tie against the Netherlands, thus becoming the first South American player to score six consecutive times in the World Cup.[41]

Valencia hails from Esmeraldas Province and is of Afro-Ecuadorian descent. He came from a poor family and when he arrived at Emelec, he had to sleep in rudimentary lodgings at the club's Estadio George Capwell, as he had no money to stay anywhere else and at times struggled to buy enough to eat.[30] In October 2016, a warrant was issued for his arrest in Ecuador for unpaid child support.[42] In August 2020, Valencia's sister, Erci was taken hostage in San Lorenzo by an armed gang and held for 10 days before being released unharmed.[43]