Elizabeth Peratrovich (née Elizabeth Jean Wanamaker, Tlingit: Ḵaax̲gal.aat [qʰaχ.ɡʌɬ.ʔatʰ];[1] July 4, 1911 – December 1, 1958)[2] was an American civil rights activist, Grand President of the Alaska Native Sisterhood,[3] and member of the Tlingit nation who worked for equality on behalf of Alaska Natives.[4] In the 1940s, her advocacy was credited as being instrumental in the passing of Alaska's Anti-Discrimination Act of 1945, the first state or territorial anti-discrimination law enacted in the United States.

In 1988, Alaska Governor Steve Cowper established April 21 as Elizabeth Peratrovich Day "for her courageous, unceasing efforts to eliminate discrimination and bring about equal rights in Alaska.  The date was later changed to February 16 in observance of the day in 1945 on which the Anti-Discrimination Act was approved. [1][5] In March 2019, her obituary was added to The New York Times as part of their "Overlooked No More" series,[6] and in 2020, the United States Mint released a $1 gold coin inscribed with Elizabeth’s likeness in honor of her historic achievements.[7] The Peratrovich family papers, including correspondence, personal papers, and news clippings related to the civil-rights work done by Elizabeth and her husband, are currently held at the Smithsonian National Museum of the American Indian.[8]

Elizabeth Peratrovich was born on July 4, 1911, in Petersburg, Alaska,[2][9] as a member of the Lukaax̱.ádi clan in the Raven moiety of the Tlingit nation and with the Tlingit name of Ḵaax̲gal.aat ("person who packs for themselves").[1]

She was orphaned at a young age and adopted by Andrew and Jean Wanamaker (née Williams), who gave her the name Elizabeth Jean.[10][11] Andrew was a fisherman and Presbyterian lay minister. The Wanamakers raised Elizabeth in Petersburg, Klawock, and Ketchikan, Alaska. Elizabeth graduated from Ketchikan High School, and then attended Sheldon Jackson College in Sitka, and the Western College of Education in Bellingham, Washington (now part of Western Washington University).[a]

The Peratroviches were concerned about racial discrimination and inequities. Looking for greater access to lawmakers who could effect change, they moved to Juneau, and even there found extensive social and racial discrimination against Alaska Native people.[7] The Peratrovichs were one of the first Indigenous families in Juneau to live in a non-Native neighborhood, and Roy Jr. was one of the first Indigenous children to attend public schools there.[14]

The Peratrovich family later moved to Antigonish, Nova Scotia, Canada, where Roy studied the fishing industry at St. Francis Xavier University, the first Alaskan to do so on a United Nations fellowship.[16][17] Later, they moved to Denver, Colorado, where Roy studied banking and finance at the University of Denver and credit procedure at the Central Bank and Trust Company in Denver.[16][17] In the 1950s, the Peratrovichs moved to Oklahoma, when Roy took up a position with the federal government, and they moved back to Alaska when Elizabeth fell ill.[18]

Elizabeth Peratrovich died after battling breast cancer, on December 1, 1958, at the age of 47.[18][19][20] She is buried at Evergreen Cemetery in Juneau, Alaska, alongside her husband Roy who died in 1989.[6][15] The eldest son, Roy Jr.—a partner in the engineering firm of Peratrovich, Nottingham and Drage[14]—became a noted civil engineer in Alaska and designed the Brotherhood Bridge in Juneau, which carries the Glacier Highway over the Mendenhall River.[21] Her younger son, Frank, worked as the Area Tribal Operations Officer for the Bureau of Indian Affairs in Juneau.[14]

In 1941, while living in Juneau, Alaska, Elizabeth and Roy Peratrovich encountered discrimination in their attempts to secure housing and gain access to public facilities. They petitioned the territorial governor, Ernest Gruening, to prohibit public places from posting signs such as “No Natives Allowed,” “We cater to white trade only,” “No Dogs, No Natives,”... that were common in Alaska during this time.[10][22][23][24]

With the help of others, Elizabeth and Roy drafted and introduced an anti-discrimination bill in 1941, though it would fail to pass. Nevertheless, they would persevere: as high-ranking representatives of the Alaska Native Brotherhood and the Alaska Native Sisterhood, Elizabeth and Roy used their unique position to bring attention to the issue of discrimination and to lobby Alaska lawmakers, the governor, and others to advocate for the passage of anti-discrimination legislation.[7] In one instance, according to their granddaughter, Betsy Peratrovich, they decided to invite a legislator to join them for coffee, taking the opportunity to plead their case.

When the invitation was accepted, they took the small amount of spare change they had and brought it to the meeting—worrying the whole time that they wouldn’t have enough to pay if anything other than coffee was ordered. Thankfully, not only did they have just enough money to pay for the beverages, but the meeting was productive! There were many grassroots efforts in those days, including efforts by countless other Alaska Native people who took steps to overcome and raise awareness of widespread inequities and instances of blatant prejudice.[7]

In 1945, representing the Alaska Native Brotherhood/Sisterhood, they would again bring an anti-discrimination bill before the Alaska Senate. Last to testify, Elizabeth took to the floor to deliver an impassioned speech, calling for equal treatment for Indigenous peoples.[7][25] In reaction to the bill, Juneau territorial senator Allen Shattuck asked, "Who are these people, barely out of savagery, who want to associate with us whites, with 5,000 years of recorded civilization behind us?" Elizabeth responded:[14]

I would not have expected that I, who am barely out of savagery, would have to remind gentlemen with five thousand years of recorded civilization behind them, of our Bill of Rights.[22]

The Senate voted 11–5 for House Resolution 14, providing "full and equal accommodations, facilities, and privileges to all citizens in places of public accommodations within the jurisdiction of the Territory of Alaska; to provide penalties for violation".[14] The bill was signed into law by Governor Gruening in 1945, nearly 20 years before the US Congress passed the Civil Rights Act of 1964. Acts of the territorial legislature required final approval from the U.S. Congress, which affirmed it (Bob Bartlett, Alaskan delegate, was known for his efficiency in passing legislation). Alaska thus became the first territory or state to end "Jim Crow" since 18 states banned discrimination in public accommodations in the three decades following the Civil War; not until 1955 would two more states, New Mexico and Montana, follow suit.[26] Elizabeth's testimony has been widely credited as a decisive factor in the passage of the historic Anti-Discrimination Act of 1945. In 1992, Fran Ulmer, who represented Juneau in the Alaska House of Representatives (and who later became lieutenant governor of Alaska), said the following about Peratrovich's testimony:

She talked about herself, her friends, her children, and the cruel treatment that consigned Alaska Natives to a second-class existence. She described to the Senate what it means to be unable to buy a house in a decent neighborhood because Natives aren't allowed to live there. She described how children feel when they are refused entrance into movie theaters, or see signs in shop windows that read "No dogs or Natives allowed."[22]

The Peratrovich family papers, including correspondence, personal papers, and news clippings related to the civil rights work done by Elizabeth and Roy Peratrovich, are currently held at the Smithsonian National Museum of the American Indian.[8] In 1988, the Alaska State Legislature declared February 16 as "Elizabeth Peratrovich Day".[7] 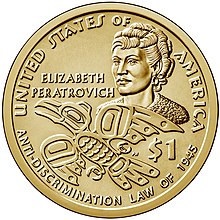