Elgin Gay Baylor (September 16, 1934 – March 22, 2021) was an American professional basketball player, coach, and executive. He played 14 seasons as a forward in the National Basketball Association (NBA) for the Minneapolis/Los Angeles Lakers, appearing in eight NBA Finals.

Baylor was a gifted shooter, a strong rebounder, and an accomplished passer, who was best known for his trademark hanging jump shot. The No. 1 draft pick in 1958, NBA Rookie of the Year in 1959, 11-time NBA All-Star, and a 10-time member of the All-NBA first team, he is regarded as one of the game's all-time greatest players.[3] In 1977, Baylor was inducted into the Naismith Memorial Basketball Hall of Fame.[4]

Baylor spent 22 years as general manager of the Los Angeles Clippers. He won the NBA Executive of the Year Award in 2006. Two years later he was relieved of his executive duties by the Clippers shortly before the 2008–09 season began.[5]

His popularity led to appearances on the television series Rowan and Martin's Laugh In in 1968; the Jackson Five's first TV special in 1971; a Buck Rogers in the 25th Century episode "Olympiad"; and an episode of The White Shadow titled "If Your Number's Up, Get Down".

Elgin "Rabbit" Baylor was born in Washington, D.C., the son of Uzziel (Lewis) and John Wesley Baylor.[6] He began playing basketball when he was 14.[7] Although he grew up near a D.C. city recreation center, African Americans were banned from using the facilities, and Baylor had limited access to basketball courts growing up.[8] He had two basketball-playing brothers, Sal and Kermit.[9] After stints at Southwest Boys Club and Brown Jr. High, Baylor was a three-time All-City player in high school.[10]

Baylor played his first two years of high school basketball at Phelps Vocational High School in the 1951 and 1952 seasons. At the time, public schools in Washington, D.C., were segregated, so he only played against other black high school teams. There he set his first area scoring record of 44 points versus Cardozo H.S.[10] During his two All-City years at Phelps, he averaged 18.5 and 27.6 points per season.[10] He did not perform well academically and dropped out of school (1952–53) to work in a furniture store and play basketball in the local recreational leagues.[10]

Baylor reappeared for the 1954 season as a senior playing for the recently opened all-black Spingarn High School. The 6 ft 5 in (1.96 m), 190 lb (86 kg) senior was named first-team Washington All-Metropolitan, and was the first African-American player named to that team.[7] He also won the SSA's Livingstone Trophy as the area's best basketball player for 1954. He finished with a 36.1 average for his eight Interhigh Division II league games.[10]

On February 3, 1954, in a game against his old Phelps team, he scored 31 in the first half. Playing with four fouls the entire second half, Baylor scored 32 more points to establish a new DC-area record with 63 points. This broke the point record of 52 that Western's Jim Wexler had set the year before when he broke Baylor's previous record of 44. However, because Wexler was white and Baylor was black, Baylor's record did not receive the same press coverage from the media, including the Washington Post, as Wexler's.[10][8] 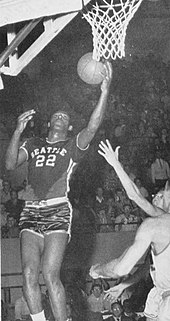 An inadequate scholastic record kept Baylor out of college until a friend arranged a scholarship at the College of Idaho, where he was expected to play basketball and football.[7] After one season playing basketball, in which he averaged 31.3 points per game,[7] the school dismissed the head basketball coach and restricted the scholarships. A Seattle car dealer interested Baylor in Seattle University, and Baylor sat out a year to play for Westside Ford, an AAU team in Seattle while establishing eligibility at Seattle.[11] The Minneapolis Lakers drafted him in the 14th round of the 1956 NBA Draft, but Baylor opted to stay in school instead.[12]

During the 1956–57 season, Baylor averaged 29.7 points per game and 20.3 rebounds per game for Seattle.[7] The next season, Baylor averaged 32.5 points per game and led the Seattle University Chieftains (now known as the Redhawks) to the NCAA championship game, Seattle's only trip to the Final Four, falling to the Kentucky Wildcats.[7] Following his junior season, Baylor was drafted again by the Minneapolis Lakers with the No. 1 pick in the 1958 NBA Draft, and this time he opted to leave school to join them for the 1958–59 NBA season.[13]

Over three collegiate seasons, one at College of Idaho and two at Seattle, Baylor averaged 31.3 points per game and 19.5 rebounds per game. He led the NCAA in rebounds during the 1956–57 season.[14]

Fifty-one years after Baylor left Seattle University, they named its basketball court in honor of him on November 19, 2009. The Redhawks now play on the Elgin Baylor Court in Seattle's KeyArena. The Redhawks also host the annual Elgin Baylor Classic. In June 2017, The College of Idaho had Baylor as one of the inaugural inductees into the school's Hall of Fame.[15] 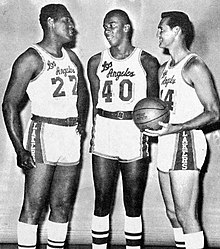 Baylor standing next to teammates Jerry Chambers (center) and Jerry West (right), circa 1966

The Minneapolis Lakers used the No. 1 overall pick in the 1958 NBA draft to select Baylor, then convinced him to skip his senior year at SU and instead join the pro ranks. The team, several years removed from its glory days of George Mikan, was in trouble on the court and at the gate. The year prior to Baylor's arrival, the Lakers finished 19–53 with a squad that was slow, bulky and aging. Baylor, whom the Lakers signed to play for $20,000 per year (equivalent to $180,000 in 2020), was the franchise's last shot at survival.[7]

With his superb athletic talents and all-around game, Baylor was seen as the kind of player who could save a franchise, and he did. According to Minneapolis Lakers owner Bob Short in a 1971 interview with the Los Angeles Times: "If he had turned me down then, I would have been out of business. The club would have gone bankrupt."[16]

Rookie of the Year

As a rookie in 1958–59, Baylor finished second in the league in scoring (24.9 points per game), third in rebounding (15.0 rebounds per game), and eighth in assists (4.1 assists per game).[17] He registered 55 points in a single game, then the third-highest mark in league history behind Joe Fulks' 63 and Mikan's 61. Baylor won the NBA Rookie of the Year Award and led the Lakers from last place the previous year to the NBA finals, where they lost to the Boston Celtics in the first four-game sweep in finals history, kicking off the greatest rivalry in NBA history.[18] During his career, Baylor helped lead the Lakers to the NBA Finals seven more times.[13] 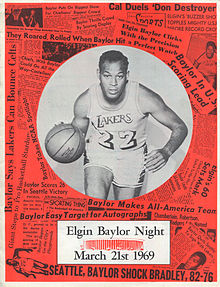 The cover of the Los Angeles Lakers program for "Elgin Baylor Night" on March 21, 1969

From the 1960–61 to the 1962–63 seasons, Baylor averaged 34.8, 38.3, and 34.0 points per game, respectively. On November 15 of the 1960–61 season, Baylor set a new NBA scoring record when he scored 71 points in a victory against the New York Knicks, while also grabbing 25 rebounds.[19] In doing so, Baylor had broken his own NBA record of 64 points that he had set in the previous season. Baylor, a United States Army Reservist, was called to active duty during the 1961–62 season, and being stationed at Fort Lewis in Washington, he could play for the Lakers only when on a weekend pass.[20] Despite playing only 48 games during the 1961–62 season, he still managed to score over 1,800 points. Later that season, in a Game Five NBA Finals victory against the Boston Celtics, Baylor grabbed 22 rebounds and set the still-standing NBA record for points in an NBA Finals game with 61;[13] he averaged 40.6 points and 17.9 rebounds in the seven-game series loss.[21]

Baylor began to be hampered by knee problems during the 1963–64 season. The problems culminated in a severe knee injury suffered during the 1965 Western Division playoffs, requiring him to undergo knee surgery.[7] Baylor, while still a very powerful force, was never quite the same, never again averaging above 30 points per game.[7]

Baylor played just two games in 1970–71 before rupturing his Achilles tendon,[7] and finally retired nine games into the subsequent 1971–72 season because of his nagging knee problems. The timing of his retirement caused him to miss two great achievements—the Lakers' next game after his retirement was the first of an NBA-record 33 consecutive wins,[22] and then the Lakers went on to win the NBA championship that season. The Lakers awarded Baylor a 1972 championship ring even though he had retired earlier in the season.[2] 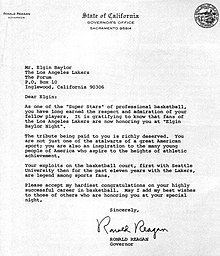 A letter from California Governor Ronald Reagan to Elgin Baylor

Baylor was the last of the great undersized forwards in a league where many guards are now his size or bigger.[23] He finished his playing days with 23,149 points, 3,650 assists and 11,463 rebounds over 846 games. His signature running bank shot, which he was able to release quickly and effectively over taller players, led him to numerous NBA scoring records, several of which still stand.[13]

The 71 points Baylor scored on November 15, 1960, was a record at the time; it was also a team record that would not be surpassed until Kobe Bryant scored 81 points against the Toronto Raptors in January 2006. The 61 points he scored in Game 5 of the NBA Finals in 1962 is still an NBA Finals record.[13] An underrated rebounder, Baylor averaged 13.5 rebounds per game during his career, including a remarkable 19.8 rebounds per game during the 1960–61 season[20]—a season average exceeded by only five other players in NBA history, all of whom were 6 ft 8 in (2.03 m) or taller.[24]

A 10-time All-NBA First Team selection and 11-time NBA All-Star, Baylor was elected to the Naismith Memorial Basketball Hall of Fame in 1977. He was named to the NBA 35th Anniversary All-Time Team in 1980 and the NBA 50th Anniversary All-Time Team in 1996. in 2009, SLAM Magazine ranked him number 11 among its Top 50 NBA players of all time. He is often listed as the greatest NBA player never to win a championship.[25][26][27]

The first biography of Baylor was written by Slam Online contributor Bijan C. Bayne in 2015, and published by Rowman and Littlefield.[28]

On April 6, 2018, a statue of Baylor, designed by Gary Tillery and Omri Amrany, was unveiled at the Staples Center prior to a Lakers game against the Minnesota Timberwolves.[29]

In 1974, Baylor was hired to be an assistant coach and later the head coach for the New Orleans Jazz, but had a lackluster 86–135 record and retired following the 1978–79 season.[30] In 1986, Baylor was hired by the Los Angeles Clippers as the team's vice president of basketball operations. He stayed in that capacity for 22 years before reportedly resigning in October 2008 at the age of 74.[31] During his tenure, the Clippers managed only two winning seasons and amassed a win-loss record of 607-1153. They also won only one playoff series during this time.[32]

Baylor was selected as the NBA Executive of the Year in 2006. That year the Clippers won their first playoff series since 1976, when the franchise was located in Buffalo, New York, and named the Buffalo Braves.[33]

In February 2009, Baylor filed an employment discrimination lawsuit against the Clippers, team owner Donald Sterling, team president Andy Roeser, and the NBA. He alleged that he was underpaid during his tenure with the team and then fired because of his age and race.[34] Baylor later dropped the racial discrimination claims in the suit.[35] Baylor's remaining claims were rejected by a Los Angeles state court jury on March 30, 2011, by a unanimous 12–0 vote.[36]

Baylor died on March 22, 2021, at age 86 of natural causes. He was survived by his wife Elaine and daughter Krystle. He has a son, Alan, and daughter, Alison, from a previous marriage.[37]