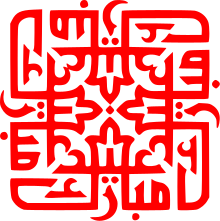 Eid Mubarak or (Arabic: عيد مبارك‎) is an Arabic term that means “Blessed feast/festival'”. The term is used by Arab Muslims, as well as Muslims all over the world. Internationally Muslims use it as a greeting for use on the feast. In the social sense, people usually celebrate Eid al-Fitr after Ramadan and Eid al-Adha in the month of Dhul Hijjah (the 12th and final Islamic month). Some state that this exchange of greetings is a cultural tradition and not part of any religious obligation.[1][2]

Arab Muslims use the term Eid Mubarak, and have a number of other ways to say happy holiday. Some Arabs also add "kul 'am wantum bikhair" (كل عام و أنتم بخير), which means "May you be well with every passing year". There is another common term in GCC states which is "Minal Aidin wal Faizin" (من العايدين والفايزين), an Arab sentence meaning "May we be sacred [one more time] and may we be succeed [in our fasting]", and the reply will be “Minal Maqbulin wal Ghanmin” (من المقبولين والغانمين), which means “May [our good deeds] be accepted [by God] and may we win [the paradise]”.[note 1]

In Serbia, Muslims usually celebrate by saying "Bajram Šerif Mubarek Olsun" to which the other replies with "Allah Razi Olsun"

In India, Pakistan and Bangladesh, People say Eid Mubarak wishes by shaking hands and hugging them three times followed by hand shake one more time after the Salat al Eid.

Muslims in countries such as Indonesia and the Malay language-speaking populations of Malaysia, Brunei, and Singapore use the expression "Selamat Hari Raya" or "Selamat Idul Fitri" (Indonesian) or "Salam Aidilfitri" (Malay). This expression is usually accompanied by the popular expression "Minal Aidin wal Faizin", an Arab sentence meaning "May we be sacred one more time and succeed in our fasting". It is a quotation from a poem written by Shafiyuddin Al-Huli during the time Muslims ruled in Al-Andalus.

In the Philippines, it is recognized as a legal holiday, though the Arabic greeting of Eid Mubarak has gained traction only recently. The traditional greeting of Muslims in the Philippines resembles that of the neighboring Malay-speaking world. This is namely "Salamat Hariraya Puwasa" (Selamat Hari Raya Puasa) for Eid al-Fitr, and "Salamat Hariraya Hadji" (Selamat Hari Raya Hajji) for Eid al-Adha.

The Hausa language, originally from Northern Nigeria and Niger, is widely spoken among Muslims throughout West Africa. Their equivalent Eid greetings in Hausa is "Barka da Sallah", which translates to "blessed Eid prayers".

In Mali, the greeting in Bambara on Eid al-Adha is "Sambe-Sambe". This greeting is similarly used by countries that have majority Mande speaking peoples, another Lingua Franca spoken by Muslims in West Africa, or were once part of the historic Mali Empire.

Muslims in countries in Latin America use the expression "Feliz Eid" (Spanish).