Joseph Michael "Dusty" Hill (May 19, 1949 – July 28, 2021) was an American musician who was the bassist of the rock band ZZ Top. He also sang lead and backing vocals, and played keyboards. He was inducted into the Rock and Roll Hall of Fame as a member of ZZ Top in 2004. Hill played with the band for over 50 years; after his death, he was replaced by the band's longtime guitar tech Elwood Francis, in line with Hill's wishes.

Hill was born in Dallas, Texas, on May 19, 1949.[1] He and his older brother Rocky Hill (also a musician) were raised in the Lakewood neighborhood of East Dallas. He attended Woodrow Wilson High School where he played the cello.[2] Like his future bandmates, Hill grew up listening to blues music, which he said was uncommon in white families; he recalled shocking the parents of his childhood friends when he brought records by Muddy Waters or Son House to their houses.[3]

Hill began singing for money with his brother Rocky at the age of 8. After Rocky formed a band with a drummer, Dusty took up bass at the age of 13. Unlike many bassists, he did not learn to play guitar first.[4] He said, "I kind of learned how to play on stage and whatnot, and embarrassment is a great motivator. If you don't play well, standing up there with lights on it really stands out, so it behooves you to get your shit up pretty quick."[4] He did not enjoy school, and achieved poor grades; according to Hill, "Part of the problem was that by the time I was 13 I was already playing in local bars, so school kinda got in the way of that and I resented it."[5]

Hill, Rocky, and future fellow ZZ Top drummer Frank Beard played in local Dallas bands the Warlocks, the Cellar Dwellers, and American Blues.[6] From 1966 to 1968, American Blues played the Dallas-Fort Worth-Houston circuit. In 1969, Hill was a member of a fake version of the British band the Zombies with Beard.[7] Hill recalled, "Being a musician in Texas had its own set of risks ... and at that time we had long, blue hair – in the 60s in Texas. I got probably less shit about having blue hair than about having long hair, because I believe they thought I was crazy."[3]

In 1968, American Blues relocated to Houston. At this time, Rocky wanted to focus on "straight blues", while Dusty wanted the band to rock more. Rocky left and Dusty and Beard moved to Houston. They joined guitarist-vocalist Billy Gibbons of the Houston psychedelic band Moving Sidewalks in the recently formed ZZ Top, just after they released their first single "Salt Lick", in 1969.[8]

On 1973's Tres Hombres, ZZ Top perfected its heavy blues style and amplified its Texas roots. The boogie rock single "La Grange" brought the band their first hit, with it just missing the Billboard Top 40. In 1975 Hill sang lead vocal on "Tush", the band's first Top 20 hit and one of its most popular songs.[12][13] On the 1976 album Tejas Hill took the vocal lead on "Pan Am Highway Blues", "Avalon Hideaway" and "Ten Dollar Man", and duetted with Gibbons on "It’s Only Love".[13]

In 1976, after almost seven years of touring and a string of successful albums, ZZ Top went on hiatus for three years while Beard dealt with his addiction problems. Hill spent the period working at Dallas Airport, saying he wanted to "feel normal" and "ground himself" after years spent performing.[14] He was rarely recognized, but told fans who asked: "No! Do you think I’d be sitting here?"[14] In 1979, when the group returned with the album Degüello, Gibbons and Hill revealed their new image of matching massive beards and sunglasses. Their hit singles from this period, "Cheap Sunglasses" and "Pearl Necklace", showed a more modern sound.[13]

Hill's on-screen appearances include Back to the Future Part III, Mother Goose Rock 'n' Rhyme, the July 20, 2009 episode of WWE Raw and Deadwood, and as himself in the 11th-season episode of King of the Hill, "Hank Gets Dusted", in which Hank Hill is said to be Dusty's cousin.[3] He also made an appearance on The Drew Carey Show as himself auditioning for a spot in Drew's band, but was rejected because of his attachment to his trademark beard which he refers to as a 'Texas Goatee'.[13][15]

In 2014, Hill fell on his tour bus and injured his hip, requiring surgery. Part of the tour was canceled. On July 23, 2021, Hill left a tour due to problems with his hip.[19] The band performed without him at the Village Commons in New Lenox, Illinois, with the band's guitar tech Elwood Francis on bass per Hill's request.[20]

Hill said he believed in God, but that he did not know "what or who God actually is". He declined to say if he was a Republican or Democrat, and said: "I just tell them that I’m a Texan. Left to my own devices I'd never leave Texas."[5]

On December 16, 1984, Hill accidentally shot himself in the abdomen when his derringer fell from his boot and discharged.[21] Hill said, "To this day, I don't know how I could do it. But I didn't really feel anything at the time. All I knew was that I had to get myself to a hospital straight away, so I got in the car and drove there. It was only when I arrived at the hospital that the seriousness of what I'd done hit me, and I went into shock."[5] He made a full recovery.[21]

Hill married his longtime girlfriend, Charleen McCrory, an actress, in 2002. He had one daughter.[19]

On July 28, 2021[22] Hill died at his home in Houston, Texas, at the age of 72.[23][18][24] The cause of death was not announced,[19] Hill's wife later said that he was looking to get more physical therapy for his chronic bursitis.[25] Billy Gibbons confirmed that ZZ Top would continue with Elwood Francis, the band's longtime guitar tech, on bass, per Hill's wishes.[20] According to Gibbons, "Dusty emphatically grabbed my arm and said, 'Give Elwood the bottom end, and take it to the Top.' He meant it, amigo. He really did."[20] Texas Governor Greg Abbott wrote on Twitter: "Today we lost a great friend and a remarkable Texan."[13] Several rock musicians and contemporaries paid condolences through social media, including Paul Stanley, Ozzy Osbourne, John Fogerty, Flea, Zakk Wylde, Warren Haynes, Tony Iommi, David Coverdale, Scorpions, Foghat, Kentucky Headhunters, Blackberry Smoke, Steve Miller Band, 38 Special, and the Allman Brothers Band.[26] 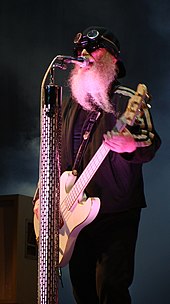 Hill cited Cream bassist Jack Bruce and jazz bassists Stanley Clarke and Charles Mingus as early influences.[3] He said he used to play more complicated bass parts, but came to prioritize composition over complexity: "Sometimes you don't even notice the bass — I hate that in a way, but I love that in a way. That's a compliment. That means you've filled in everything and it's right for the song, and you're not standing out where you don't need to be."[4]

Michael Hann of The Guardian wrote that Hills' bass tone was as crucial to ZZ Top's sound as Gibbons' guitar.[3] The New York Times described him as a "precise musical mechanic" complementing Gibbons' "showy virtuoso".[19] Hill described his tone as "big, heavy and a bit distorted because it has to overlap the guitar. Someone once asked me to describe my tone, and I said it was like farting in a trash can. What I meant is it’s raw, but you’ve got to have the tone in there.”[19]

Preferring the Fender Telecaster Bass, Hill used many different basses and amplifiers in different combinations. He maintained a large collection of vintage and custom basses by luthier John Bolin of Bolin Guitars USA. Hill designed uncomplicated basses with a single pickup with a single volume knob, with the occasional addition of a specially powered knob for tone control.[27][28]