Poirier was born on January 19, 1989, in Lafayette, Louisiana, and is of Acadian French descent, specifically he is of Cajun heritage.[8] He attended Northside High School for a short time, as he dropped out in the ninth grade because of repeatedly getting into trouble and street fights.[9]

Poirier still spends most of his time in Lafayette with his wife Jolie and their daughter, but trains at American Top Team in South Florida, where he relocates before fights.[10]

Poirier turned professional in 2009, quickly compiled a record of 7–0, competing mostly in regional promotions across his native Louisiana and the Southern United States. Glimpses of Poirier’s early MMA career in Louisiana is depicted in the documentary Fightville.[11]

In October 2010, World Extreme Cagefighting merged with the Ultimate Fighting Championship. As part of the merger, all WEC fighters were transferred to the UFC.[14]

After the UFC/WEC merger, newly crowned UFC Featherweight Champion José Aldo was set to make his first defense against No. 1 contender Josh Grispi at UFC 125. Aldo then had to withdraw from the bout due to a back injury on November 23, 2010. Poirier agreed to step in and face Grispi at the event on January 1, 2011.[15] Poirier won the fight by unanimous decision.

Poirier was expected to face Rani Yahya on June 11, 2011, at UFC 131.[16] However, Yahya was forced from the bout with an injury, and he was replaced by promotional newcomer, Jason Young.[17] Poirier defeated Young via unanimous decision after three rounds.

Poirier was expected to face Erik Koch on February 4, 2012, at UFC 143.[19] However, Koch pulled out of the bout, citing an injury, and he was replaced by Ricardo Lamas.[20] Then, just two weeks later, Lamas had to withdraw from the fight with an injury, leaving Poirier again without an opponent.[21] A week later, Max Holloway agreed to step in to fight Poirier. Poirier defeated Holloway in the first round, with a triangle-armbar from the mount position, earning a Submission of the Night bonus.[22]

Poirier faced Chan Sung Jung on May 15, 2012, in the main event at UFC on Fuel TV: Korean Zombie vs. Poirier.[23] This was the first time Poirier has been put on the main event. Jung defeated Poirier via submission (D'arce Choke) in the fourth round. The performance earned both participants Fight of the Night honors.[24] The bout was honored as Fight of the Year by several publications at the conclusion of 2012.[25]

Poirier quickly returned to action, taking his second fight within 63 days as he stepped in as a replacement for an injured Dennis Siver.[27] Poirier faced Cub Swanson in the co-main event on February 16, 2013, at UFC on Fuel TV: Barão vs. McDonald. During the fight, both fighters landed punches which appeared to hurt the other. Poirier scored leg kicks and double leg takedowns. Swanson retaliated with head kicks and submission attempts.[28] Poirier lost the fight via unanimous decision (29-28, 30–27, 30–27).

Poirier faced Erik Koch on August 31, 2013, at UFC 164.[29] Poirier hurt Koch with punches throughout the fight, knocking him down with a punch near the end of round 1 and nearly finishing the fight, he ended up winning the bout via unanimous decision. After the win, Poirier wanted a rematch with Cub Swanson. He told reporter Ariel Helwani that Swanson must "be a man".

Poirier faced Akira Corassani at The Ultimate Fighter Nations Finale.[31] He won the fight via TKO in the second round. The win also earned Poirier his second Fight of the Night bonus award.[32]

Poirier faced Conor McGregor on September 27, 2014, at UFC 178.[33] He lost the fight by TKO in the first round. This was the first time Poirier was stopped by strikes. After the match, Poirier said "I always saw it as a plus but the Conor McGregor fight was the turning point. I remember I was backstage getting ready to walk out and I saw him and he threw this smile and pointed at me. I don’t know why but it really got to me, man. It really messed with my head."[34]

After the loss, Poirier transferred up a weight class to the Lightweight division. Poirier said that it was because weight cuts are distracting him from training. He also claimed that he would never go back to featherweight nor move up to welterweight. "This is the division (lightweight) I'm going to win the belt at," said Poirier in an interview.[35][36]

Poirier faced Carlos Diego Ferreira in a lightweight bout on April 4, 2015, at UFC Fight Night 63.[37] He won the fight via knockout in the first round.[38] The win also earned Poirier his first Performance of the Night bonus award and a disclosed pay of $118,000, the highest disclosed pay received by Poirier at the time.[39]

Poirier faced Yancy Medeiros on June 6, 2015, at UFC Fight Night 68.[40] He won the fight via TKO in the first round, after dropping Medeiros twice with punches.[41] The win also earned Poirier his second Performance of the Night bonus award.[42]

Poirier was expected to face Joseph Duffy on October 24, 2015, at UFC Fight Night 76.[43] However, Duffy pulled out of the fight on October 21, three days prior to the event, after sustaining a concussion during a sparring session.[44] In turn, the pairing was rescheduled and took place on January 2, 2016, at UFC 195.[45] Poirier won the fight by unanimous decision.[46] After the bout, Poirier was hospitalized for a broken nose. He had a lay off for six weeks due to the injury.[47]

Poirier challenged Jim Miller on February 11, 2017, at UFC 208.[53] Poirier punched Miller against the fence, which appeared to hurt Miller. In return, Miller repeatedly kicked Poirier's legs. Later on, Miller swept Poirier onto the mat and failed a kimura attempt. Poirier won the back-and-forth fight via majority decision.[54] The win also earned Poirier $50,000 and his third Fight of the Night bonus award.[55] Due to injuries sustained during the fight, Poirier was suspended indefinitely.[56]

After the suspension, Poirier fought Eddie Alvarez on May 13, 2017, at UFC 211.[57] Poirier rocked Alvarez in the second round but was subsequently dropped when Alvarez landed two illegal knees while Poirier was against the fence. With the Texas commission not operating under the new unified rules, referee Herb Dean declared the fight a No Contest as he did not believe Alvarez knew Poirier was a grounded opponent at the time. However, both fighters were awarded the Fight of the Night bonus award.[58]

Poirier faced Anthony Pettis on November 11, 2017, at UFC Fight Night 120.[59] He won the fight via TKO after Pettis tapped out due to a broken rib when Poirier applied a body triangle in the third round.[60] This fight also won him the Fight of the Night bonus award.[61]

After the Pettis fight, Poirier signed a new contract with UFC although he had three fights remaining in his previous contract.[62] Poirier faced Justin Gaethje on April 14, 2018, at UFC on Fox 29. He won the fight via TKO in the fourth round.[63] This fight earned him the Fight of the Night bonus award.[64]

Poirier faced UFC Featherweight Champion Max Holloway for the Interim UFC Lightweight Championship on April 13, 2019, at UFC 236.[73] He won the back-and-forth fight by unanimous decision to earn the title and breaking Holloway's thirteen fight win-streak.[74][75] This fight earned him the Fight of the Night award, his fourth consecutive performance bonus.[76]

Poirier faced the undefeated and undisputed UFC Lightweight Champion Khabib Nurmagomedov on September 7, 2019, in a title unification bout at UFC 242.[77] He lost the bout via rear-naked choke submission in the third round.[78]

Poirier faced Dan Hooker on June 27, 2020, at UFC on ESPN: Poirier vs. Hooker.[79] He won the exciting back-and-forth fight by unanimous decision.[80] This fight earned him his seventh Fight of the Night award.[81] The bout was widely considered as one of the greatest fights of the year and was a contender for multiple awards.[82]

As the first bout of his new contract, Poirier faced Conor McGregor in a rematch of their 2014 bout at UFC 257 on January 24, 2021.[83][84] He won the fight via technical knockout in the second round, becoming the first person to defeat McGregor by knockout.[85] This win earned him the Performance of the Night award.[86] 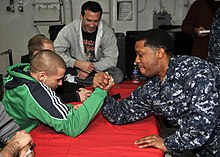 Poirier auctioned his UFC 211 kit on eBay to raise money for Second Harvest Food Bank. The highest bidder paid $5,100 for Poirier's shirt, gloves, cap, hand wraps and shorts.[91][92][93] In April 2018, Poirier and his wife founded the Good Fight Foundation. Poirier proceeded to auction his UFC Fight Night 120 and UFC on Fox 29 fight kits as well. The money raised went to the family of a deceased Lafayette police officer and the Acadiana Outreach Center, respectively.[94][95] Poirier also auctioned his UFC on FOX fight kit and used the money raised to buy 500 backpacks for school children in his hometown of Lafayette.[96]

After his bout with Nurmagomedov at UFC 242, the two swapped shirts after the fight. In his post-fight interview, Nurmagomedov said that he would be selling the shirt Poirier gave him and donating the proceeds to Poirier's charity.[97] Likewise, Poirier announced that he would be auctioning off his UFC 242 fighting equipment to raise funds for the foundation.[98] After the event, Poirier auctioned his fight kit with Nurmagomedov's walkout shirt for $60,200.[99] Simultaneously, Nurmagomedov sold Poirier's walkout shirt for $100,000 which was matched by Dana White to combine total of $200,000 donation to Poirier's foundation. According to Poirier, his foundation is working with Justin Wren's Fight for the Forgotten to help provide clean drinking water to the Echuya Batwa people in Uganda.[100][101]

Poirier was set to face Garry Tonon in a grappling match at SubStars event on February 21, 2020, from which Poirier was supposed to be donating his ticket and PPV sales and part of his purse to his foundation.[102] However, Tonon suffered an injury a week before the match and the bout was canceled.[103]

During the COVID-19 pandemic, Poirier's foundation donated 1000 meals to the employees of three major hospitals in his native Lafayette area.[104]

On June 26, 2020, Poirier was awarded the Forrest Griffin Community Award by UFC for his charity work.[105]

After UFC 257, McGregor was scheduled to donate $500,000 to the Good Fight Foundation as he had pledged before their scheduled bout.[106] As of April 12, 2021, Dustin Poirier states the donation had not been made. The dispute has been a source of controversy in sports media.[107]

On December 8, 2020, Poirier announced on Twitter[108] the release of his brand new cajun hot sauce brand 'Poirier's Louisiana Style' in collaboration with a Canadian company, Heartbeat Hot Sauce Co.[109] It is available for purchase on Poirier's official website for $12.