Double or Nothing was a professional wrestling pay-per-view (PPV) event produced by All Elite Wrestling (AEW). It took place on May 30, 2021. The event primarily took place at Daily's Place in Jacksonville, Florida, however portions of the main event match were taped at the nearby TIAA Bank Field. It was the third event in the Double or Nothing chronology, and the first to be held on a Sunday. It was AEW's last PPV to be held at Daily's Place during the COVID-19 pandemic. The event was originally scheduled to be held at the MGM Grand Garden Arena in Paradise, Nevada on May 29, but was moved to Daily's Place and pushed back a day.

Ten matches were contested at the event, including one on The Buy In pre-show. In the main event, The Inner Circle (Chris Jericho, Jake Hager, Sammy Guevara, Santana and Ortiz) defeated The Pinnacle (MJF, Wardlow, Shawn Spears, Cash Wheeler and Dax Harwood) in a Stadium Stampede match; had The Inner Circle lost, they would have been forced to disband. In other prominent matches, Kenny Omega defeated Orange Cassidy and Pac in a three-way match to retain the AEW World Championship, Dr. Britt Baker D.M.D. defeated Hikaru Shida by submission to win the AEW Women's World Championship, Sting and Darby Allin defeated Scorpio Sky and Ethan Page, and The Young Bucks (Matt Jackson and Nick Jackson) defeated Jon Moxley and Eddie Kingston to retain the AEW World Tag Team Championship. The event was also notable for the surprise appearances of Lio Rush and Mark Henry, making their AEW debut, as well as a cameo appearance by Konnan during the Stadium Stampede match.

Double or Nothing drew 5,200 attendees, making it AEW's highest attended event since the start of the pandemic, and also making it the first AEW event to emanate with a full capacity crowd since the start of the pandemic. It also garnered an estimated 135,000 pay-per-view buys, and generated over $6 million in revenue, which in turn made it the highest grossing non-WWE professional wrestling PPV event since 1999.

Double or Nothing is considered All Elite Wrestling's (AEW) marquee event, having first been held in 2019, which was the promotion's first pay-per-view (PPV) produced. It is held annually around Memorial Day and is one of AEW's "Big Four" PPVs, which includes All Out, Full Gear, and Revolution, their four biggest shows produced quarterly.[2] The 2021 event was the third event in the Double or Nothing chronology and was held on May 30 at AEW's home base of Daily's Place in Jacksonville, Florida with the main event taking place at the nearby TIAA Bank Field stadium.[3][4] As part of the Double or Nothing weekend, Dynamite aired May 28 live on TNT as a "Friday Night Dynamite" special episode.[5] Additionally, AEW held a Double or Nothing Fan Fest on May 29, featuring live stage shows, exhibition matches, meet and greets, and more.[6]

AEW partnered with Cinemark Theatres, Harkins Theatres, and Marcus Theatres to host Double or Nothing in select movie theatres.[7][8][9] On May 29, TNT aired a one-hour television special previewing the event called Countdown to Double or Nothing.[10]

Impact of the COVID-19 pandemic

While AEW had plans to host the 2020 Double or Nothing at the MGM Grand Garden Arena on the Las Vegas Strip, which was where the original show emanated, the venue canceled the event due to the COVID-19 pandemic.[11] In response, AEW announced that the 2020 event would still proceed as planned, which occurred at Daily's Place and the TIAA Bank Field stadium in Jacksonville, Florida. The announcement also confirmed that a third Double or Nothing event would occur at the MGM Grand Garden Arena on May 29, 2021; in addition to offering refunds, tickets purchased for 2020's show would be valid for 2021.[12] However, at Revolution on March 7, 2021, AEW announced that the 2021 Double or Nothing would instead be held at Daily's Place in Jacksonville due to the ongoing pandemic, and was moved back a day to May 30; as a result, the MGM Grand Garden Arena issued refunds for all originally purchased tickets.[3][4] On May 5, AEW's CEO Tony Khan announced that the venue would be operating at full capacity for Double or Nothing, making it AEW's first show since the start of the pandemic to go ahead with a full crowd.[13] The 2021 event would in turn be AEW's last pay-per-view to be held at Daily's Place during the pandemic, as AEW will resume live touring in mid-July with their next PPV, All Out, scheduled to be held in September in the Chicago area.[14]

Double or Nothing featured professional wrestling matches that involved different wrestlers from pre-existing feuds and storylines. Wrestlers portrayed heroes, villains, or less distinguishable characters in events that built tension and culminated in a wrestling match or series of matches.[15] Storylines were produced on AEW's weekly shows Dynamite, Dark, and Elevation and The Young Bucks' YouTube series Being The Elite.

At Blood and Guts, a match between Orange Cassidy (#1) and Pac (#2), the two top-ranked singles wrestlers in AEW, was announced for the following week's episode of Dynamite, with the winner receiving a match against Kenny Omega for the AEW World Championship at Double or Nothing.[18] However, their match ended in a double knockout, thus it was decided that Omega would defend the championship against both Cassidy and Pac in a three-way match at Double or Nothing.[19]

On the April 21 episode of Dynamite, Britt Baker, who was ranked #1 on the women's rankings, confronted Hikaru Shida after Shida retained the AEW Women's World Championship against Tay Conti.[21] At Blood and Guts, a championship match between the two was arranged for Double or Nothing.[18]

On the April 7 episode of Dynamite, AEW World Tag Team Champions The Young Bucks (Matt Jackson and Nick Jackson) attacked Jon Moxley and Eddie Kingston, and aligned themselves with their longtime friend Kenny Omega, as well as Omega's allies The Good Brothers (Doc Gallows and Karl Anderson) from Impact Wrestling.[22] On the May 12 episode of Dynamite, The Young Bucks challenged Moxley and Kingston to a match at Double or Nothing with the AEW World Tag Team Championship on the line.[19]

On the March 31 episode of Dynamite, Cody Rhodes was attacked by his former friend QT Marshall, who allied himself with Nick Comoroto, Aaron Solow, and the newly debuted Anthony Ogogo to form a new faction dubbed The Factory.[23] At Blood and Guts on May 5, Rhodes defeated Marshall, but after the match was assaulted by Ogogo, who knocked Rhodes down before covering him with the flag of the United Kingdom.[18] On the May 12 episode of Dynamite, Rhodes challenged Ogogo to a match at Double or Nothing.[19]

On The Buy-In pre-show, Serena Deeb defended the NWA World Women's Championship against Riho. Deeb forced Riho to submit to a "Serenity Lock" to retain the title.[14]

The actual pay-per-view opened with "Hangman" Adam Page facing Brian Cage. After Cage was involved in a miscue with his allies Ricky Starks and Hook, Page performed the "Buckshot Lariat" on Cage to win the match.[14]

Next, The Young Bucks (Matt Jackson and Nick Jackson) (accompanied by Brandon Cutler) defended the AEW World Tag Team Championship against Jon Moxley and Eddie Kingston. In the climax, The Young Bucks performed four consecutive "BTE Triggers" on Moxley to retain the title.[14]

In the next match, Cody Rhodes (accompanied by Arn Anderson) faced Anthony Ogogo (accompanied by QT Marshall). Rhodes performed the "Vertebreaker" on Ogogo to win the match.[14] 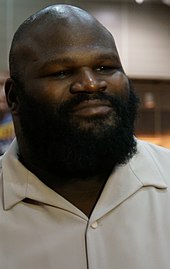 At the event, Mark Henry was unveiled as an analyst for AEW's upcoming show Rampage

Next, Miro defended the AEW TNT Championship against Lance Archer (accompanied by Jake Roberts). Miro forced Archer to submit to the "Game Over" to retain the title.[14]

Next, Darby Allin and Sting took on Ethan Page and Scorpio Sky. Sting performed the "Scorpion Death Drop" on Sky to win the match.[14]

In the penultimate match, Kenny Omega defended the AEW World Championship against Pac and Orange Cassidy in a three-way match. Cassidy pinned Omega after performing the "Orange Punch", but Omega hooked Cassidy into a crucifix pin to retain the title.[14]

After this, commentator Tony Schiavone announced that WWE Hall of Famer Mark Henry would be joining AEW as an analyst for their upcoming show Rampage, which would begin airing in August on TNT.[14]

In the main event, The Inner Circle (Chris Jericho, Jake Hager, Sammy Guevara, Santana and Ortiz) faced The Pinnacle (MJF, Shawn Spears, Wardlow, Cash Wheeler and Dax Harwood) in a Stadium Stampede match. If The Inner Circle lost this match, they would be forced to disband. The match started at TIAA Bank Field, before slowly making its way to nearby Daily's Place. In the end, Guevara performed the "630 Senton" on Spears inside the ring at Daily's Place to win the match.[14]

Double or Nothing received generally positive reviews from critics. For CBSSports.com, Brent Brookhouse described the event as "one of AEW's strongest pay-per-view cards in their short history", and giving major praise to the main event Stadium Stampede match, the three-way AEW World Championship match, the AEW World Tag Team Championship match, and the opening match between Adam Page and Brian Cage. However, he directed criticism to the Rhodes-Ogogo match, and the Casino Battle Royale.[29]

Justin Barrasso of Sports Illustrated wrote that the event had "more than exceeded its mission by showcasing the strength of the AEW brand." He stated that AEW World Tag Team Championship match was his favorite of the night, and also commended the AEW World Tag Team Championship match, the Darby Allin-Sting vs. Ethan Page-Scorpio Sky tag team match, and the opening match between Adam Page and Brian Cage. On the contrary, he disliked the main event, feeling that it was "built for a movie, not a wrestling card." He also commented that Cody Rhodes's win over Anthony Ogogo was "likely to draw some negative reactions".[30]

Writing for Pro Wrestling Torch, Wade Keller also liked the event and mused that the show "will be remembered for years for many reasons", and also enjoyed the show's short length, stating that it "flew by". Adam Page-Brian Cage was a "really good match", the AEW World Tag Team Championship match was "great", and the Casino Battle Royale was "really fun". He also gave praise to the pre-show match between Serena Deeb and Riho, but criticized several aspects of the show, including the "convoluted finish" of the AEW World Championship three-way, the match between Cody Rhodes and Anthony Ogogo, the main problem of which was that "the crowd just didn't care that much", and also the Stadium Stampede match, which he described as "a mix of good and bad".[31]

Sports journalist Dave Meltzer of the Wrestling Observer Newsletter reported that the event drew 4,700 paid fans, with a total of 5,200 people in attendance. He also estimated that Double or Nothing received anywhere from 135,000 to 150,000 pay-per-view buys, with a total revenue of $6.3 million, and a $300,000 gate.[1]

On June 4, it was announced that the Casino Battle Royale winner Jungle Boy would challenge Kenny Omega for the AEW World Championship on the June 26 episode of Dynamite.[32]