Diane Cilento (2 April 1932 – 6 October 2011) was an Australian actress and author.[3] She is best known for her film roles in Tom Jones (1963), which earned her an Academy Award nomination, Hombre (1967) and The Wicker Man (1973). She also received a Tony Award nomination for her performance as Helen of Troy in the play Tiger at the Gates.

Cilento was born in Mooloolaba, Queensland, the daughter of Phyllis (née McGlew) and Raphael Cilento, both distinguished medical practitioners in Queensland.[3][4][5] She was the fifth of six children; four of her siblings became medical practitioners, while her sister Margaret was an artist.[6][7] Cilento's paternal great-grandfather was Italian. Her maternal grandfather was merchant and exporter Charles Thomas McGlew.

At an early age she decided to follow a career as an actress and, after being expelled from school in Australia, was schooled in New York while living with her father. She later won a scholarship to the Royal Academy of Dramatic Art and moved to Britain in the early 1950s.[6] 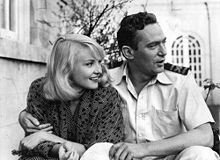 After graduation, Cilento found work on stage almost immediately and was signed to a five-year contract by Sir Alexander Korda. Her first leading role in a film was in the British film Passage Home (1955), opposite fellow Australian Peter Finch.[8]

She soon secured roles in British films and worked steadily until the end of the decade. In 1956, she was nominated for a Tony Award for Best Supporting or Featured Actress (Dramatic) for Helen of Troy in Jean Giraudoux's Tiger at the Gates. She was nominated for the Academy Award for Best Supporting Actress for her performance in Tom Jones in 1963[9] and appeared in The Third Secret the following year.

She starred with Charlton Heston in the 1965 film The Agony and the Ecstasy, and with Paul Newman in the 1967 western film Hombre, and The Wicker Man (1973).

Cilento continued working as an actress, in films and television. In the 1980s, she settled in Mossman, north of Cairns, where she built her own outdoor theatre, named "Karnak", in the tropical rainforest. The venture allowed her to participate in experimental drama.[10]

In 2001, she was awarded the Centenary Medal for "distinguished service to the arts, especially theatre".[11]

Cilento died of cancer at Cairns Base Hospital on 6 October 2011.[21][22][13] A collection of items from her estate was donated to the Queensland University of Technology and is housed in the library.[23]