Derek Michael Chauvin (/ˈʃoʊvən/ SHOH-vən; born March 19, 1976) is an American former police officer who was convicted of the murder of George Floyd in Minneapolis, Minnesota. The murder set off a series of protests in the Twin Cities and across the rest of the United States, later spreading around the world.

Chauvin had knelt on Floyd's neck for about nine minutes while Floyd was handcuffed, lying face down on the street calling out "I can't breathe" during an arrest made with three other officers on May 25, 2020. He was fired by the Minneapolis Police Department (MPD) on May 26 and was arrested on May 29. Chauvin was charged with second-degree unintentional murder, third-degree murder, and second-degree manslaughter.

His murder trial began on March 8, 2021 in the Minnesota Fourth Judicial District Court, and concluded on April 20 when the jury found him guilty on all three charges. Following his conviction, Chauvin's bail was revoked and he was booked into the Oak Park Heights maximum-security prison, awaiting sentencing on June 16.

Chauvin was a member of the MPD from 2001 to 2020, and had graduated from Metropolitan State University in 2006 with a bachelor's degree in law enforcement. During his career, he was involved in three police shootings, one of which was fatal. He had 18 complaints on his official record. After the murder charges were brought against him, Chauvin and his then-wife were separately charged with multiple felony counts of tax evasion. His tax evasion trial begins June 30, 2021.

Chauvin was born on March 19, 1976.[5][6] His mother was a housewife and his father was a certified public accountant.[7] When he was seven, his parents divorced and were granted joint custody of him.[7]

Chauvin attended Park High School in Cottage Grove, Minnesota, but did not finish and later obtained a GED certificate.[8] He earned a certificate in quantity food preparation at Dakota County Technical College and worked jobs as a prep cook at McDonald's and a south metro buffet restaurant.[6][9] He served in the United States Army Reserve from 1996 to 2004,[10] including two stints in the military police between 1996 and 2000.[8][11][12] During that time, he also attended Inver Hills Community College from 1995 to 1999[9][10] and later transferred to Metropolitan State University where he graduated with a bachelor's degree in law enforcement in 2006.[8][9][10]

Chauvin joined the MPD in 2001.[9][13] While on the force he was involved in three police shootings, one of which was fatal.[13][14][15][16] He received a medal for valor in 2006 for being one of several officers who fired on a suspect who pointed a shotgun at them, and another in 2008 for a domestic violence incident in which he broke down a door and shot a suspect who reached for his pistol.[17][18] He received a commendation medal in 2008 after he and his partner tackled a fleeing suspect holding a pistol. In 2009, Chauvin received a commendation medal after working off duty as a security guard for a nightclub.[12]

Chauvin had 18 complaints on his official record, two of which ended in discipline, including official letters of reprimand.[19]

On September 4, 2017, Chauvin was among officers responding to a complaint by the mother of two young children. Videos from the scene were said to show Chauvin hitting a 14-year-old black boy in the head with a flashlight so hard he required stitches, then holding him down with his knee for nearly 17 minutes, ignoring the boy's complaints that he couldn't breathe.[20] Trying to avoid prejudice in the Floyd death trial, the judge prohibited the prosecutors from raising the matter. [20] Federal authorities are said to be considering filing charges in both cases, in addition to the state convictions.[20]

According to the former owner of El Nuevo Rodeo, a Latin nightclub, Chauvin had worked there off duty as security while George Floyd was also working as security, but was not certain whether they knew each other.[21][22] The owner has been critical of Chauvin since his arrest, describing Chauvin's tactics as "overkill" and saying "Chauvin was unnecessarily aggressive on nights when the club had a black clientele, quelling fights by dousing the crowd with pepper spray and calling in several police squad cars as backup".[12][23]

On May 25, 2020, Chauvin was one of four officers involved in arresting George Floyd on suspicion of using a counterfeit $20 bill at a market and was the field training officer for one of the other officers involved.[24] Security camera footage from a nearby business did not show Floyd resisting the arrest.[25][26] The criminal complaint stated that, based on body camera footage, Floyd repeatedly said he could not breathe while standing outside the police car, resisted getting in the car and fell down;[27] he went to the ground face down. While Floyd was handcuffed and lying face down on the street, Chauvin knelt on Floyd's neck for more than nine minutes.[28][29][30] After Chauvin placed his knee on Floyd's neck, Floyd repeatedly said "I can't breathe", "Mama", and "please".[31][30] For part of the time, two other officers knelt on Floyd's back.[32] During the final two[33] minutes Floyd was motionless and had no pulse.[34] Several bystanders took videos which were widely circulated and broadcast.[31]

Chauvin and the other officers involved were fired the day following the incident.[35] While knee-to-neck restraints are allowed in Minnesota under certain circumstances, Chauvin's use of the technique has been widely criticized by law enforcement experts as excessive.[36][37][38] On June 23, Minneapolis Police Chief Medaria Arradondo said that Chauvin had been trained in the dangers of positional asphyxiation and characterized Floyd's death as murder.[39] 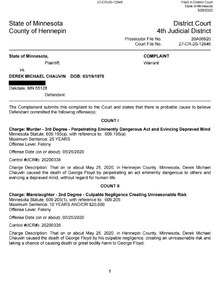 May 29, 2020 criminal complaint against Chauvin

Chauvin was arrested on May 29, 2020.[40] Hennepin County Attorney Mike Freeman charged him with third-degree murder, and the lesser included offense of second-degree manslaughter,[41][42][43][44] [5][45] making him the first white police officer in Minnesota to be charged in the death of a black civilian.[46][47] Under Minnesota law, third-degree murder is defined as causing another's death without intent to kill, but "evincing a depraved mind, without regard for human life". Second-degree manslaughter also does not imply lethal intent, but that the perpetrator created "an unreasonable risk" of serious harm or death.[48]

On May 31, Minnesota Attorney General Keith Ellison took over the case at the request of Governor Tim Walz. On June 3, Ellison amended the charges against Chauvin to include unintentional second-degree murder under the felony murder doctrine, alleging that Chauvin killed Floyd in the course of committing assault in the third degree;[49][50] Minnesota sentencing guidelines recommend 12.5 years' imprisonment on conviction of that charge.[51] Bail for Chauvin was set at $1.25 million.[52] Prior to Chauvin's arrest, his attorney and prosecutors had made unsuccessful attempts to negotiate a plea bargain to cover both state and federal charges.[53] Additionally, Ellison also charged the three other officers with aiding and abetting second-degree murder[44][54][51] with bail set to $1 million.[55]

Following his arrest on May 29, Chauvin was booked and processed at the Ramsey County Jail. In June 2020, eight correctional officers who work at the jail filed a discrimination complaint against their supervisors with the Minnesota Department of Human Rights. They alleged that during Chauvin's brief stay before his transfer to a state prison, non-white guards were not allowed to work on the fifth floor where Chauvin was being held. The complaint also alleged that a guard had witnessed a white lieutenant sit on Chauvin's bed and that she permitted Chauvin to use her cellphone. Responding to the complaint, the Minnesota Department of Human Rights said that it was opening an investigation to determine whether discrimination took place.[56]

Following a complaint that their charge never gained traction, in February 2021 the Star Tribune reported that the group pursued legal action and filed discrimination charges with the state Department of Human Rights. Their attorney said that his clients sued to hold Superintendent Steve Lydon and Ramsey County "responsible for the discrimination that occurred under their watch." The suit alleges the officers were informed that they would be reassigned because of Chauvin's arrival. One of the plaintiffs said that while he regularly processed and booked high-profile inmates, he was in the middle of patting down Chauvin when the superintendent told him to stop and replaced him with a white officer. The attorney for the group said that they felt 'deeply humiliated and distressed" due to the discrimination they had experienced. The suit also says two other officers saw security camera footage that showed that a white female lieutenant "was granted special access" wherein she sat on Chauvin's bed and patted his back "while appearing to comfort him" and let Chauvin use a cellphone. In a statement provided to the Star Tribune by the sheriff's office, Lydon said he "was trying to 'protect and support' minority employees by shielding them from Chauvin."[57]

Chauvin was released on conditional bail on October 7, 2020, after posting a bond of $1 million.[58][59][60][61] On October 22, 2020, Hennepin County Judge Peter Cahill dismissed the third-degree murder charge, but also denied Chauvin's motion to dismiss the other, more serious murder charges.[62][63] On November 5, 2020, Judge Cahill ruled that Chauvin and all three of the others charged would be tried together in Hennepin County.[64][65] However, on January 13, 2021, Judge Cahill reversed his earlier ruling, deciding that Chauvin would be tried separately from the other three officers.[66] On March 11, 2021, Cahill reinstated the third-degree murder charge against Chauvin.[67]

Chauvin's trial began on March 8, 2021, at the Hennepin County Government Center.[68] It marked the first time that a judge in Minnesota authorized cameras to show a full criminal trial.[68] On April 20, 2021, a jury, consisting of six white people and six people of color, found Chauvin guilty on three counts: unintentional second-degree murder; third-degree murder; and second-degree manslaughter.[1][2][3] His sentencing hearing is planned to be in June.[69][70] Following his conviction, Judge Cahill agreed to accept a prosecution motion to revoke Chauvin's bail and Chauvin was taken back into police custody.[71][72]

Following his conviction, Chauvin's bail was revoked and he was remanded into custody by the Hennepin County Sheriff's Office, which transferred him to the Minnesota Department of Corrections.[73][74] He was then booked into the Oak Park Heights maximum-security state prison, where he was previously incarcerated following his 2020 arrest.[74] Chauvin is held in solitary confinement for 23 hours a day in an isolated wing of the prison, where he is under constant watch "for fears for his safety."[75][76] Chauvin will be held at Oak Park Heights until his sentencing hearing on June 25, 2021.[77]

The United States Department of Justice (DOJ) convened a grand jury in February 2021 to investigate Chauvin for several civil rights charges. The investigation included the killing of Floyd on May 25, 2020, and other incidents involving Chauvin, such as a September 2017 incident where Chauvin restrained a 14-year old boy for several minutes using his knee to lean into the boys back. During the restraint Chauvin ignored the boy's pleas that he could not breathe and the boy briefly lost consciousness. The 2017 incident was deemed inadmissible as evidence in Chauvin's murder trial.[78][79] Following Chauvin's murder conviction, the investigation was still underway, with the DOJ reportedly weighing whether to bring criminal charges against Chauvin for the 2017 incident.[80] Federal investigators plan to charge Chauvin and the other three officers for federal civil rights violations, and intend to ask the grand jury to indict him for both the 2017 and 2020 incidents.[81] The federal charges will be prosecuted by Justice Department attorneys in Minnesota and Washington, D.C.[82]

On July 22, 2020, after the murder charges were brought against him, Chauvin and his then-wife were separately charged in Washington County, Minnesota, on nine felony counts of tax evasion[83][84] related to allegedly fraudulent state income tax returns from 2014 to 2019.[85] Prosecutors state the couple under-reported their joint income by $464,433, including more than $95,000 from Chauvin's off-duty security work.[84][86] The complaint also alleges failure to pay proper sales tax on a $100,000 BMW purchased in Minnesota in 2018, failure to declare income from Chauvin's wife's business, and improper deductions on a rental home.[84][87]

Chauvin's tax evasion trial begins on June 30, 2021.[88] He is represented in the case by defense attorney Eric Nelson, who represented Chauvin in his murder trial.[88]