Dark is a German science fiction thriller streaming television series co-created by Baran bo Odar and Jantje Friese.[5][6][7] It ran for three seasons from 2017 to 2020. In the aftermath of a child's disappearance, Dark follows characters from the fictional German town of Winden as they pursue the truth. They follow connections between four estranged families to unravel a sinister time travel conspiracy which spans several generations. The series explores the existential implications of time, and its effect on human nature. It features an ensemble cast including Louis Hofmann, Julika Jenkins, Andreas Pietschmann, Maja Schöne, Lisa Vicari, Lisa Kreuzer, Dietrich Hollinderbäumer, Jördis Triebel and Oliver Masucci.

Dark received critical acclaim, with praise for its tone, visuals, acting, casting, musical score, and the ambition and complexity of its narrative.

Children start vanishing from the German town of Winden,[12] bringing to light the fractured relationships, double lives, and the dark pasts of four families living there, and unfurling a mystery that spans four generations.

The first season begins in 2019, but later grows to include 1986 and 1953 via time travel, when members of the show's central families become aware of a wormhole in the cave system beneath the local nuclear power plant. During the first season, secrets are revealed concerning the Kahnwald, Nielsen, Doppler, and Tiedemann families, and their lives begin crumbling as their ties are exposed. The conspiracy involves the missing children and the history of the town and its citizens.

The second season continues the intertwining families' attempts to reunite with their missing loved ones, several months after the first-season finale, in 2020, 1987 and 1954, respectively. Additional story-lines are set in 2053 and 1921. The second season introduces Sic Mundus Creatus Est, a major faction in the ongoing battle for the ultimate fate of the people of Winden and the world. The season counts down towards the apocalypse.

The third season follows the four families across time in the wake of the apocalypse in 2020. It introduces a parallel world tethered to the first. The third season continues the 1954, 1987, 2020 and 2053 storylines in the first world, while also adding a new 1888 storyline and 2019 and 2052 in the second world, as the factions further their own desires for each world. The season also showcases the main events between all of these years, continuing the events of the season while also serving as backstory for the events of the first two seasons.

The first season takes place primarily in 2019 but expands to include stories set in 1986, 1953, and – in the final scene of the first season – 2052, with several characters portrayed at various ages by multiple actors.

The second season takes place several months after the first, depicting the initial stories in 2020, 1987, and 1954, respectively, while continuing the future-set storyline into 2053, and adding a fifth storyline, set in 1921. The third season introduces a storyline based in 1888 and a parallel reality featuring alternate versions of many main characters. 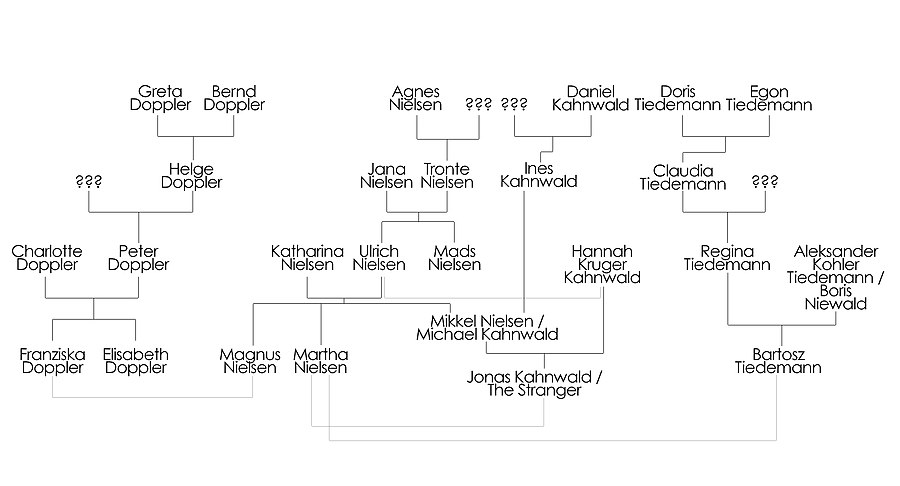 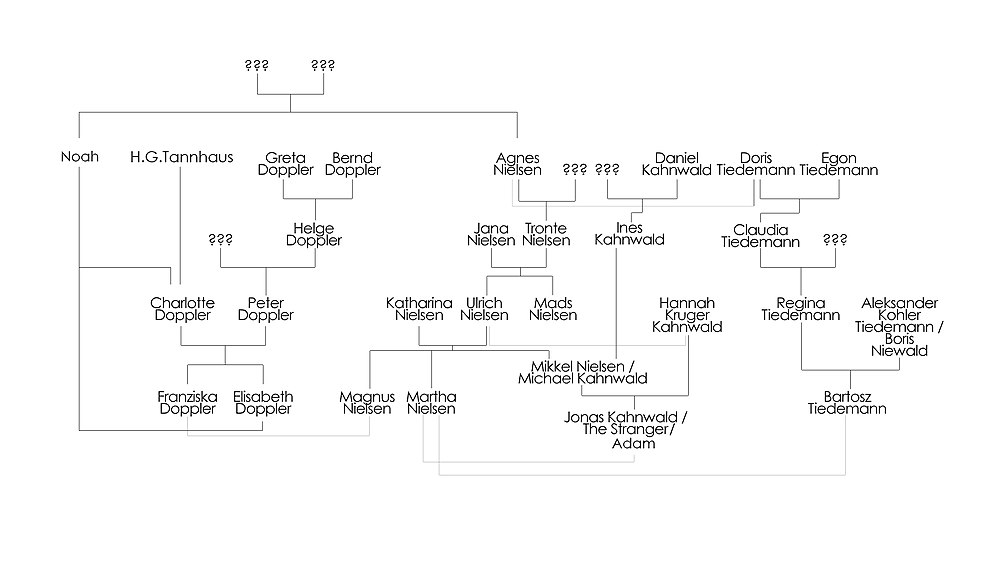 Netflix approved the series in February 2016 for a first season consisting of ten one-hour episodes.[15][5] Principal photography started on 18 October 2016 in and around Berlin[16] (including Saarmund and Tremsdorf in Brandenburg),[17] and ended in March 2017.[5] The church where Jonas meets Noah was filmed at the Südwestkirchhof Cemetery in Stahnsdorf. The high school location was filmed at the Reinfelder Schule in Berlin's Charlottenburg-Wilmersdorf neighbourhood. The bridge and the train tracks were filmed in the middle of the Düppeler forest near Lake Wannsee.[18]

The series was filmed in 4K (Ultra HD) resolution.[19] It is the first German-language Netflix original series and follows a trend of internationally produced Netflix originals, including the Mexican series Club de Cuervos in 2015, the Brazilian series 3% in 2016, the Italian series Suburra: Blood on Rome in 2017, and the Indian series Sacred Games in 2018.

Principal photography for the second season took place on location in Berlin from June 2018.[20]

Apart from the score, numerous pre-released songs were also used throughout the series. The song "Goodbye" by Apparat in collaboration with Soap&Skin was used as the opening theme for the episodes. Songs by the vocal ensemble Roomful of Teeth were also heavily featured on multiple episodes; the third movement of Caroline Shaw's Partita for 8 Voices was featured prominently in season one, and Alev Lenz's "May the Angels", also featuring Roomful of Teeth, was used in the season two episode five, "Lost and Found".

The first season of Dark received mostly positive reviews from critics, with many noting its similarities to the TV series Twin Peaks and the Netflix series Stranger Things. The review aggregator website Rotten Tomatoes gave the first season an approval rating of 89%, with an average rating of 7.36 out of 10 based on 45 critics. The website's critical consensus is "Dark's central mystery unfolds slowly, both tense and terrifying, culminating in a creepy, cinematic triumph of sci-fi noir."[28] The Guardian praised the series for its tone, the complexity of its narrative, and its pacing.[29] Metacritic reported a score of 61 out of 100 based on 10 reviews, indicating "generally favorable reviews".[30] Refinery29 noted that the series was darker and more in-depth than Stranger Things.[31] However, there was some criticism by a reviewer for a heavy-handed approach to its message, a lack of sympathetic characters, and unoriginality of certain aspects of the series.[32]

The second season received critical acclaim. Metacritic, which assigns a weighted average score out of 100 to reviews and ratings from mainstream publications, gave the season an average score of 82, based on 4 reviews, indicating "universal acclaim".[33] On Rotten Tomatoes, season two of the series holds an approval rating of 100% based on 29 reviews, with an average rating of 8.07/10, with the "Certified Fresh" status.[34] The site's critical consensus states, "Dark's sumptuous second season descends deeper into the show's meticulously-crafted mythos and cements the series as one of streaming's strongest and strangest science fiction stories."[34] Critics referred to season two as ominous and much more bizarre than season one, and that the series managed to subvert several tropes regarding the concepts of time travel.[35][36]

The third season received critical acclaim. It holds an approval rating of 97% on Rotten Tomatoes based on 30 reviews, with an average rating of 8.54/10, with the "Certified Fresh" status.[37] The site's critical consensus states, "Dark's final chapter is as thrilling as it is bewildering, bringing viewers full circle without sacrificing any of the show's narrative complexities."[37] At Metacritic the season received an average score of 92, based on 4 reviews, indicating "universal acclaim".[38]

The series was nominated for the Goldene Kamera TV awards 2018 in three categories: best series; best actress: Karoline Eichhorn as Charlotte Doppler; and best actor: Oliver Masucci as Ulrich Nielsen.[39] None of these nominations resulted in awards, but Louis Hofmann received the "Best Newcomer" award in recognition (among others of his performances in several movies) of his lead role in Dark.[40] In August 2018, the series received a nomination in the category Best TV Show in the Brazilian BreakTudo Awards 2018, and actor Louis Hofmann was nominated in the category "International Actor".[41]

The actors named are awarded as "representatives for the full cast".[42]