The Far Side cartoon 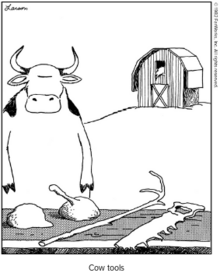 "Cow Tools" is a cartoon from Gary Larson's The Far Side, published in October of 1982. It depicts a cow standing in front of a table of bizarre, misshapen implements with the caption "Cow tools". The cartoon confused many readers, who wrote or phoned in seeking an explanation of the joke. In response to the controversy, Larson issued a press release clarifying that the thrust of the cartoon was simply that, if a cow were to make tools, they would "lack something in sophistication".[1] It has been described as "the most loathed Far Side strip ever".[2]

The single panel cartoon depicts a horned cow standing on its hindquarters at a table, on which are placed four oddly-shaped objects. One object resembles a crude hand saw. The caption simply reads "Cow tools".

Immediately upon the cartoon's publication, Chronicle Features, which syndicated The Far Side, was inundated with queries from readers and newspaper editors seeking an explanation of the cartoon. According to the general manager of Chronicle Features, "the phone never stopped ringing for two days".[3] Larson himself received hundreds of letters about "Cow Tools", some of which were reprinted in the 1989 anthology The Prehistory of The Far Side. In one letter, a reader from Texas wrote that they had shown the cartoon to "40-odd professionals with doctoral degrees", and none could understand it.[4]

Reflecting on the cartoon's reception, Larson suggested he had erred in making one of the tools resemble a saw, which misled many readers into believing that to understand the cartoon's message, they needed to decipher the identities of the other three tools.[5]

Larson took the unusual step of issuing a press release, explaining the joke and apologizing for the confusion caused:

The cartoon was intended to be an exercise in silliness. While I have never met a cow who could make tools, I felt sure that if I did, they (the tools) would lack something in sophistication and resemble the sorry specimens shown in this cartoon. I regret that my fondness for cows, combined with an overactive imagination, may have carried me beyond what is comprehensible to the average Far Side reader.[1]

Larson further explained that he was inspired by the idea that tool use was the characteristic that separated mankind from the rest of the animal kingdom.