Though Curtis is ethnically Māori, his many character roles have included a range of ethnicities, such as Hispanic, Samoan, Indian and Arab. He is the co-owner of the independent New Zealand production company Whenua Films.

Curtis was born in Rotorua, in the North Island of New Zealand. He is one of eight children, the son of an amateur dancer.[2] Curtis is of Māori descent; his tribal affiliations are Te Arawa[3] and Ngāti Hauiti.

As a boy he studied mau rākau, a traditional Māori form of taiaha fighting, with Māori elder Mita Mohi on Mokoia Island,[4] which nurtured his abilities as a performer in kapa haka. Curtis later performed as a breakdancer and competitively in rock 'n' roll dance competitions.[5] He received his secondary education at Edmund Rice College, Rotorua.

Curtis started acting in amateur productions of musicals Fiddler on the Roof and Man of La Mancha with the Kapiti Players and the Mantis Cooperative Theatre Company, before attending the New Zealand Drama School and Teatro Dimitri Scoula in Switzerland. He worked at a number of New Zealand theatre companies, including Downstage, Mercury Theatre, Bats Theatre, and Centre Point. His stage roles include Happy End, The Merry Wives of Windsor, Othello, The Cherry Orchard, Porgy and Bess, Weeds, Macbeth, Serious Money, and The End of the Golden Weather. 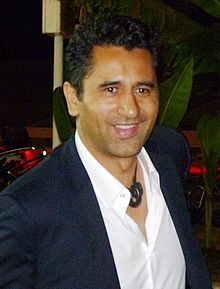 His first feature film role was a small part in the Oscar-nominated Jane Campion film The Piano. He went on to win attention in Once Were Warriors, one of the most successful films released on New Zealand screens; the line "Uncle fucken Bully" referring to Curtis's character spoken by "Jake the Muss", played by Temuera Morrison, became one of New Zealand film's most memorable and quoted lines, as well as being part of the "Kiwiana" trend. He played Kahu in the short-film Kahu & Maia, a contemporary depiction of a Ngāti Kahungunu and Ngāti Rongomaiwahine legend. He played a seducer in the melodrama Desperate Remedies. In 2000 Curtis starred as family man Billy Williams in Jubilee,[6] before playing father to the lead character in the international hit Whale Rider.

In 2004 with producer Ainsley Gardiner, Curtis formed independent film production company Whenua Films.[7] The goals of the company are to support the growth of the New Zealand indigenous film-making scene, and support local short filmmakers. He and Gardiner were appointed to manage the development and production of films for the Short Films Fund for 2005–06 by the New Zealand Film Commission. They have produced several shorts under the new company banner, notably Two Cars, One Night, which received an Academy Award nomination in 2005, and Hawaikii by director Mike Jonathan in 2006. Both short films circulated through many of the prestigious international film festivals like the Berlinale.

In 2014, Curtis played the lead role in The Dark Horse, which the National Radio review called "one of the greatest New Zealand films ever made."[9] The New Zealand Herald praised him for his "towering performance"[10] as real-life Gisborne speed chess player and coach Genesis Potini, who died in 2011. Curtis studied chess and deliberately put on weight for the role.

In the NBC TV drama Trauma,[13] he played daredevil flight medic Reuben "Rabbit" Palchuck.[14] Curtis was cast as Travis Manawa, a leading male role of the AMC TV series Fear the Walking Dead,[15] the spin-off of The Walking Dead.[16]

In 2017, Curtis was cast as Tonowari and is set to appear in the four sequels to Avatar, including Avatar 2 and Avatar 3.[17]

In 2019, he played Jonah Hobbs, the brother of Luke Hobbs (Dwayne Johnson) in Fast & Furious Presents: Hobbs & Shaw; their characters are Samoan.[18]

Curtis guards his personal life closely. He was married in late 2009[19] in a private ceremony at his home, and has three children. He is Roman Catholic.[20]

Despite being of Māori descent, Curtis has been cast in a variety of roles that have challenged him to play different ethnicities from Hispanic/Latino, Indian and Middle Eastern descent. Upon being asked about his place as an "all-purpose ethnic" actor, he actually responded quite positively to it stating, "It's been a real advantage, I love being ethnic, I love the colour of my skin. There are limitations in the business, that's a reality, but I've been given such wonderful opportunities."[21]

New Zealand animated series, Bro Town references a character who’s big brother made a career playing Arab terrorists and Hispanic characters in Hollywood. This is an indirect nod of the head to Cliff Curtis.